Cabaret at the 2012 Edinburgh Festival Fringe 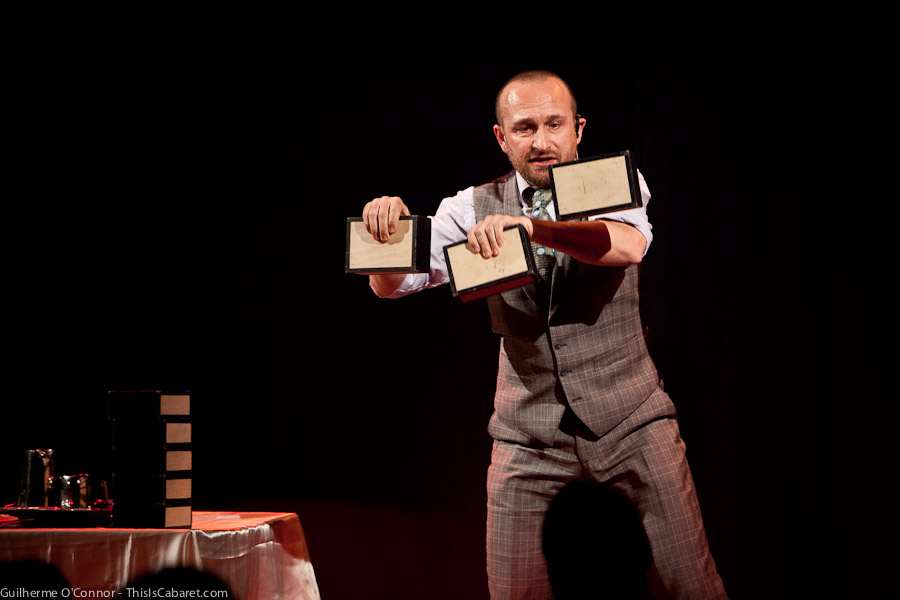 Welcome to This Is Cabaret’s own Fringe central. Check this page regularly to keep up with the only media coverage dedicated exclusively to cabaret, burlesque and circus in the 2012 Edinburgh Festival Fringe. You can come back to this list at any time by clicking on the red Fringe coverage logo on other related pieces.

See below for listings, reviews and features.

WHAT IS CABARET?
Learn the essentials about the most diverse genre of performance on Earth.

● Variety Shows
Burlesque, cabaret, circus, magic and comedy, all in one bill. Choose your revue and watch the finest vaudevillians at the Fringe take turns to entertain you.

● Cabaret Shows
A round-up of solo shows, double acts and other musical comedy treats full of attitude and cheeky humour.

● The Tom Collins Free Variety Hour
Acrobats Tom Balmont and Abi Collins prove it is possible to put on a great circus show in the back room of a pub.

● Triskaidekaphilia
Named after a fetish for the number 13, Vendetta Vain’s horror-themed Fringe revue played for one night only.

● Tumble Circus: This Is What We Do for a Living
The acclaimed acrobat duo mixes drama and circus in a behind-the-scenes examination of their partnership.

● The Jewbadour
Leeds crooner Daniel Cainer revisits his biographical songs in an instigating storytelling journey loaded with humour and feeling.

● La Clique Royale
The newest incarnation of the international vaudeville phenomenon is a mesmerising concoction of breathtaking circus stunts and sly comedy.

● Midnight Kabarett
Frequented by the finest British vaudevillians both onstage and in the audience, Itsy’s casual late-night showcase may be a free event, but feels like a VIP affair.

● It’s Not Easy Being Yellow
Ria Lina’s outrageous ditties make a good fit for a full-length show, but the aimless verbiage of the spoken material siphons the fun out of it.

● The Bongo Club Cabaret
Stale stunts and drab attempts at comedy give Edinburgh’s pioneering variety showcase little but its laurels to recommend it.

● Chaz Royal’s Sexy Circus Sideshow
Reinvented as a month-long engagement for its Fringe debut, the all-star showcase struggles with the new format in a haphazard hour of vaudevillian dares.

● Waiting for Stanley
There’s more than burlesque in Audacity Chutzpah’s bag of tricks, as seen in this moving wartime clown drama.

● Up and Over It
Judging from the Irish dance duo’s Wonderground show, their Fringe run will be packed with swift moves and gags.

● Rime
Circus company Square Peg fears no albatrosses in their physical theatre take on The Rime of the Ancient Mariner.

● The Vivisection of VarietyWhere is cabaret going? What makes it tick? Join the debate in Bring Me the Head of Variety Entertainment, a series of daily talks with variety performers.

● All Eyes on the Uke of EdinburghTricity Vogue interviews the hopefuls and returning winners of Ukulele Cabaret‘s fiercely disputed award.

● Mat Ricardo’s Edinburgh Diary: Drowning in Flop Sweat
Time is not on Ricardo’s side. Will he finish his show in time for his Edinburgh run?

● Myra DuBois’ Top Tips for Surviving the Edinburgh FringeAuntie Myra has just the trick to get through the cobblestone flyering hell.

● The Poster Art of Ukulele Cabaret
Whether as a monthly London show or a star-studded Fringe variety showcase, Tricity Vogue’s ukefest does what it says on its illustrated tin.

● The True Stories of Waiting for Stanley
Leela Bunce (AKA Audacity Chutzpah) remembers the most emotional reactions by spectators at her multimedia clown experiment.