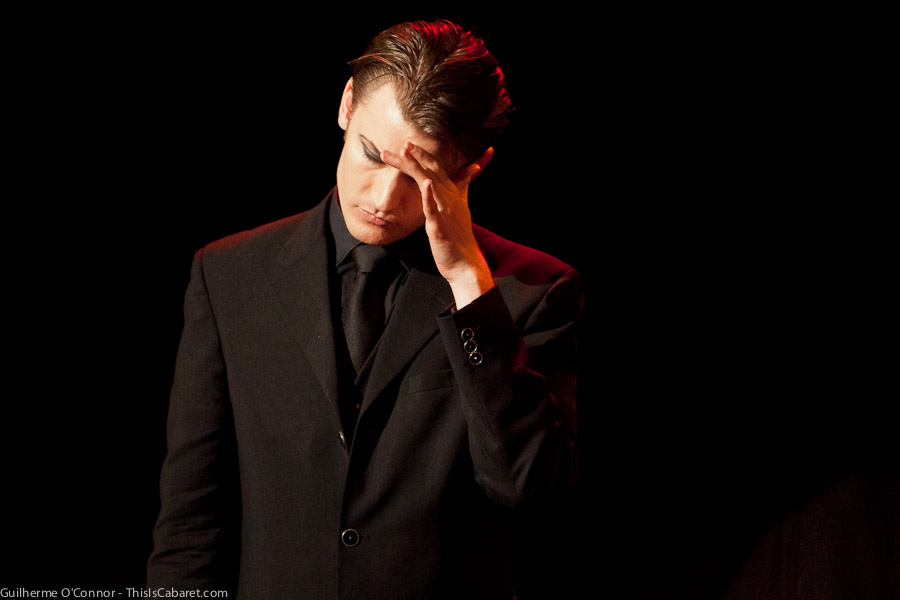 I’m not sure I want to know what a dissolute deviant like Dusty Limits does in his spare time, when he’s not hosting Britain’s foremost revues. Judging from Post-Mortem, the latest in a series of solo shows developed with pianist Michael Roulston, at least some of that time is spent on an ever-growing cabaret songbook of mordant satire and defiant comedy, paired with exquisitely crooned ballads of personal angst.

Like Darkling, his previous production at the Edinburgh Festival Fringe, Post-Mortem takes a bleak look at life and its end. Though Limits claims “sit-down misery” as his genre, he indulges in the flippant witticisms his fans have grown accustomed to. Expect a lot less audience interaction than his usual, though: with 12 numbers to get through in an hour, there’s barely enough time to fondle a couple of heads in a timid walk down the aisles.

A committed indictment of hypocrisy underlines the humour of his original material, with a timely eye for current affairs. Limits is as likely to make fun of Facebook as of homophobia or religious bigotry. Mister Cardinal, an ironic reply to Cardinal Keith O’Brien’s attacks on the upcoming Scottish legalisation of gay marriage, is a spiteful invective that makes more than a few patrons shift uneasily in their seats. That is entirely to be applauded. Cabaret’s public is almost unanimously centre-left, middle-class and gay-friendly. Whatever manages to shock them – especially with such an easy target as Catholic conservatism – is a positively meaningful statement shaking up some deeply settled dust in the genre.

Paradoxically, the most personal segments in the crooner’s performance come from his covers. A brilliant chunk in the middle of the programme starts with Sondheim show tune Losing My Mind staged as drunken love song gag, then segues into a moving medley of David Wilcox’s My Old Addiction and Bowie’s Ashes to Ashes. Backed by Roulston’s elegant musical sophistication, Limits makes standards his own, articulating sorrow and regret in vivid, heartfelt nuances. Next to his electrifying take on Nina Simone’s Sinnerman, they’re deeply engaging interpretations worthy of grand concert halls.

Though full of elating numbers, Post-Mortem proceeds unevenly. A good three songs at the start of the set make a slow build-up, including I Don’t Know Who I Belong To, a token Weimar number with little relevance to the overall theme. Likewise, the latter third of the show grows weary with the convoluted anti-banking diatribe of Poor, introduced by a knee-jerk spoken-word parody of children’s book Mr. Greedy. By the time obvious LGBT throwaway Glory Box kicks in, with flimsy karaoke arrangements, the finer moments of the evening seem to be far behind you.

Despite shooting in many directions, Post-Mortem keeps a cohesive emotional range from beginning to end. It may be hit-and-miss, but the relentless wit and powerful voice of Dusty Limits are always worth a gamble.