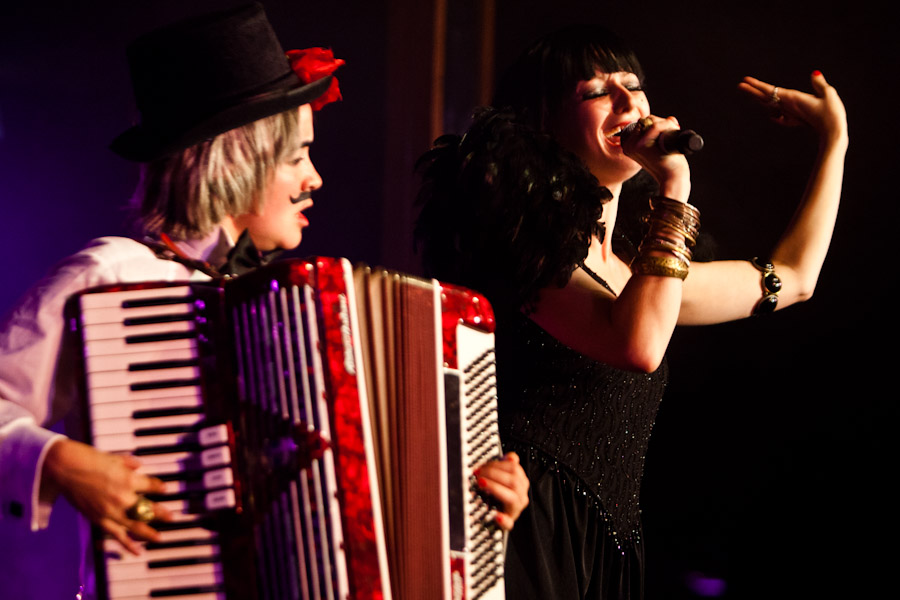 Musical comedy duo EastEnd Cabaret has entertained and shocked crowds with their scandalously hilarious sexcapades since 2009. After an acclaimed season at last year’s Edinburgh Festival Fringe and an award-winning Australian tour, East London’s most debauched denizens bring an updated version of their homonymous feature-length show to the Priceless London Wonderground festival. 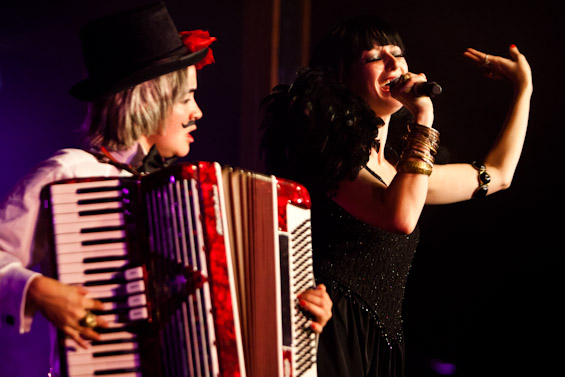 The pair consists of Bernadette Byrne, a vain cabaret diva with an insatiable appetite for sexual experimentation, and Victor Victoria, a submissive hermaphrodite whose unrequited love for her reaches obsessive peaks of jealousy. Their narrative songs expose the sleazy highs and criminal lows of their relationship in a snowballing maelstrom of sordid paraphilias.

The resulting onstage chemistry is comedy gold. “Bernie” and “Victy” bounce off each other with consummate timing gag after gag, twist after twist. As the show progresses, the sex fiends also suck audience members into their unravelling adventures, serenading long lost lovers and improvising fantasy scenarios with volunteering partners. The resulting all-enveloping spectacle has the public erupting in laughter, singing and clapping along to contagious tunes played on keyboards, accordion, violin, ukulele and musical saw (mostly by Victy, an accomplished multi-instrumentalist prodigy).

Lasting roughly an hour, the Wonderground show is a work in progress culled from the double act’s extensive repertoire. Despite their reputation for lively Balkan-tinted versions of pop hits like I’m Too Sexy and Push It, the evening now focuses largely on original material like deflowering anthem Is It in Yet? and the vibrant exhibitionism primer of Danger Wank. Fans of EastEnd Cabaret’s Edinburgh show The Revolution Will Be Sexual, as well as their former monthly residence at Cellar Door (a highlight of the London cabaret calendar at the time), will also notice the absence of their communist puppets.

The duo’s meteoric success has seen them perform at larger and larger spaces. More streamlined, the new format reflects that change and makes the most of the venues currently hosting their full-length show. Still, some of the jokes are lost, like a ping-pong ball visual gag that makes little sense when the protagonist is wearing trousers.

Regardless of how you dress them up, though, catchy songs like these are the substance of foolproof cabaret. The EastEnders will laugh with you, at you and on you, among other inventive positions. When it’s over, as Bernie sings in Drinking Song, you’ll have a great story to tell in the morning. For that alone, EastEnd Cabaret remains one of the hottest tickets in town.