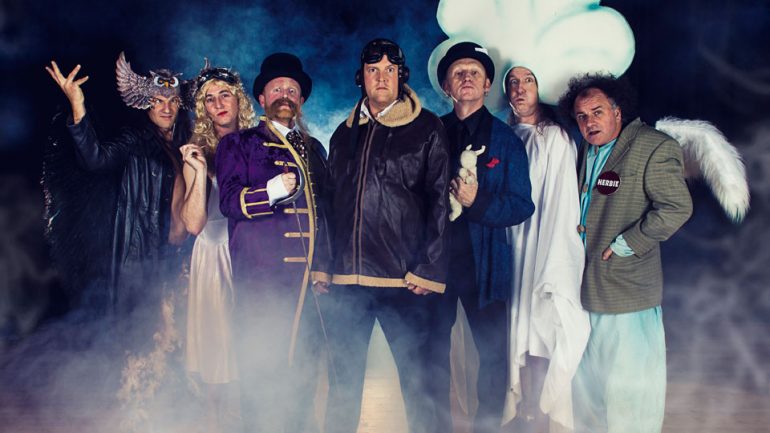 Strap in: Slightly Fat Features are back in town with another thrill ride of a show.

Slightly Fat Features’ Goronwy Thom is a man on a mission. Not the James Bond kind that usually involves bulk homicide, opportunistic sex and product placement galore, but one that is no less thrilling: bringing brilliant British variety to the masses.

This isn’t hyperbole: we’ve seen this lot a number of times and always left with wide smiles and happy memories. If Slightly Fat Features’ productions were a box of chocolates, it would be a Quality Street tin packed with just the purple ones: from end to end, their shows are an all-killer, no-filler cavalcade of comedy, circus, music and sideshow action.

The SFF crew’s latest outing The Slightly Fat Show will be taking over Leicester Square Theatre from 20-23 December and, amid getting everything ready for their big night, we caught up with Goronwy Thom who talked to us about the dangers and delights in store for the audience.

We’ve yet to see an SFF show that isn’t packed full of strange and crazy stunts. Has any stunt ever gone horribly wrong as part of a live show?

Not horribly wrong, at least not yet (touch wood).

There are always little cuts and bruises from our shows. We’ve had cut faces from sword fighting mistakes, cut fingers from knife throwing, bad backs from flipping off a huge walking ball whilst dressed as a tiger!

It’s always after the show you feel completely wrecked, during the show it always seems the adrenaline stops the pain.

We are now a slightly older and slightly fatter cast so it’s quite funny how many stunts there are in this show, hopefully we will keep going for years and we can do shows as very old men. In the old peoples home still juggling knives and riding unicycles!

As always this show has a huge collection of weird and wonderful stunts including amounts many things this time- balancing a pint whilst juggling knives, blindfolded chair balancing, sword fighting and multiple flaming toothbrushes.

How would you describe an SFF show to someone who has never seen one?

It is hard to describe until you see us live, but it’s a comedy cabaret, a variety show for the 21st century.

It’s a unique live experience. I wouldn’t say it was a kids show, but you can definitely bring your kids, and your grandparents. We have original live music throughout, circus tricksters, illusionists and off-the-wall group routines. We have been described as a mix between Cirque du Soleil and Monty Python.

Basically we hope we give a rammed packed two hours of entertainment. Where you will laugh and gasp throughout and then leave the theatre uplifted and happy!

Your style of classic British variety will compete this winter with the likes of La Soiree and Black Cat Cabaret who tend to use mostly non-British casts. What would you say defines British variety? Is it the style of the acts, the particular mix of acts or the type of humour?

British variety was the classically at the seaside, end of pier shows and shows which packed out theatres across the UK. There are still fantastic shows like that, and they sell really well.

That feels very British in style, but although those shows are hugely successful, I think now that kind of show only has quite a niche audience.

So to try and open it up to a newer audience, we are changing the style of a British variety show. We are very British in our comedy style and when we tour internationally, audiences recognise the ‘classic’ British humour and love it. So I guess it’s the style of the humour that defines our show as being British.

What would your advice be to younger variety performers looking to make their mark and rise in the industry?

Keep working. Keep performing. Wherever that might be. Usually the more you work, the more “match fit” you are and the more relaxed you are on stage. It usually leads to a better performance and with more scope to improvise and adapt to the situation.

As a cabaret or variety act, the audiences you play to are always so different: it could be in a theatre, a spiegeltent, outside, in a venue which really isn’t designed to do shows or at some corporate thing where no-one wants to watch you. If you are calm and you are comfortable, then these changes in venue and styles can be addressed easily rather than last minute.

Oh and most importantly enjoy doing shows. If you do, then it is obvious on stage and it is infectious to an audience.

What was the last variety show or act you saw that inspired you to try something new?

I recently watched Slava’s Snowshow again with my kids and the way that incredible show is lit was inspirational especially the very tight lighting cues and effects. It made me want to do more stuff with lights as it really added to everything in the show.

Every show I ever watch, though, is inspiring in its own way – even if it is bad! Whatever the act is, whether it’s a singer or comic or whatever, it is inspiring. You can always learn something.

Should there be more government funding through ACE for variety and the kind of sub-genres in your show? If so, should it be to help existing companies like yourselves or to performers and companies starting out?

I think there should be more funding for variety and cabaret and circus. It seems like they get left to last quite often. I think the money that there is should be spread between companies who need it whether they are young, old, emerging or established.

As a company we haven’t ever got any funding. I hope and try to sustain the show with audiences enjoying the show, spreading the word and coming back and buying tickets. It’s not easy but we will keep going as long as people want to watch us!

The Slightly Fat Show will be at Leicester Square Theatre from 20-23 December.