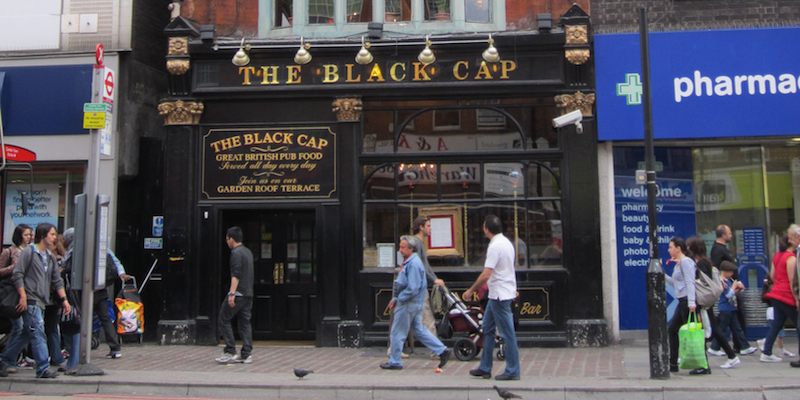 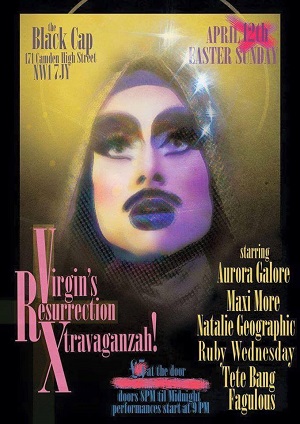 The poster from the final night of the Black Cap.

After what looked like a last minute reprieve only last Wednesday, Camden’s iconic gay pub The Black Cap has been closed by its owners ahead of possible redevelopment.

The Black Cap’s rollercoaster of a year came to a sudden halt last night as the pub’s owners, Faucet Inn, shuttered the venue with very little in the way of advance warning. Virgin Xtravaganzah headlined what proved to be the final show while Holestar sang a poignant Hello, Goodbye from the stage.

This is a sad and bewildering end to one of London’s longest-serving drag dens and a gay haunt since at least the mid 1960s. Famous names like Adrella and Danny La Rue have performed there with the first floor bar and terrace named after much-loved stars Mrs Shufflewick and Her Imperial Highness Regina Fong respectively.

If anything, the Black Cap – whose stated motto is “Just Be Fabulous” – was on something of a upturn over the last year or so with packed out shows featuring homegrown and international drag talent. The Meth Lab, for example, had seen numerous contestants of RuPaul’s Drag Race lipsync for the lives of the Cap faithful.

The beginning of what looks like the venue’s end came in January when Camden Council gave notice that it was minded to approve planning permission for a residential redevelopment of the building’s first, second and third floor. This would have meant the destruction of both the bar and the terrace. Fears were raised that the suggested sound proofing would be inadequate; as seen in the case of the George Tavern, even a single noise complaint could in theory endanger a publican’s licence.

The plans were fought tooth and nail. At a public meeting the following month, representations from cabaret journalist Ben Walters, Camden resident and foster carer for LGBT youth Nigel Bevington and local planning expert Colin Leadbetter all decried the proposals, as did senior councillors. Leader of the Council Sarah Hayward and her deputy Pat Callaghan both lent their support, the former calling the Black Cap a “vital asset for a community that still sadly suffers discrimination.” Faucet Inn failed to send representation which was just as well: the Council chose to reject the redevelopment plans as they stood.

It looked like the tide had turned, especially when only last Wednesday the Black Cap successfully applied to be recognised as an asset of community value (ACV). The application was made by Nigel Harris, director of Camden LGBT Forum. At the time, Harris proclaimed that “it ensures our local residents have a safe space to go and meet other LGBT people. Because it holds great memories for our older members who have been visiting for decades. Because it provides a space for LGBT groups and outreach. Because it puts Camden on the map with its grand history of top talent and support for equal rights.”

The venue had been given ACV status before in 2013 but the owners overturned that decision soon after. Fingers were crossed that Faucet Inn would not choose to challenge the status this time. Those fingers are probably still crossed that something positive can come from this situation.

What exactly drove Faucet Inn to the drastic action of shuttering their own property in such a sudden fashion is as yet unknown. One possible motivation mentioned has been that if the venue is closed for long enough, it will no longer be deemed “a community asset” which would endanger its ACV status. Others on social media have wondered whether Faucet Inn would have kept the Black Cap open if the redevelopment had gone ahead as planned. The truth is that we’ll never know and that, for now at least, it looks like the Black Cap joins a number of other LGBT venues lost to ever-encroaching gentrification.