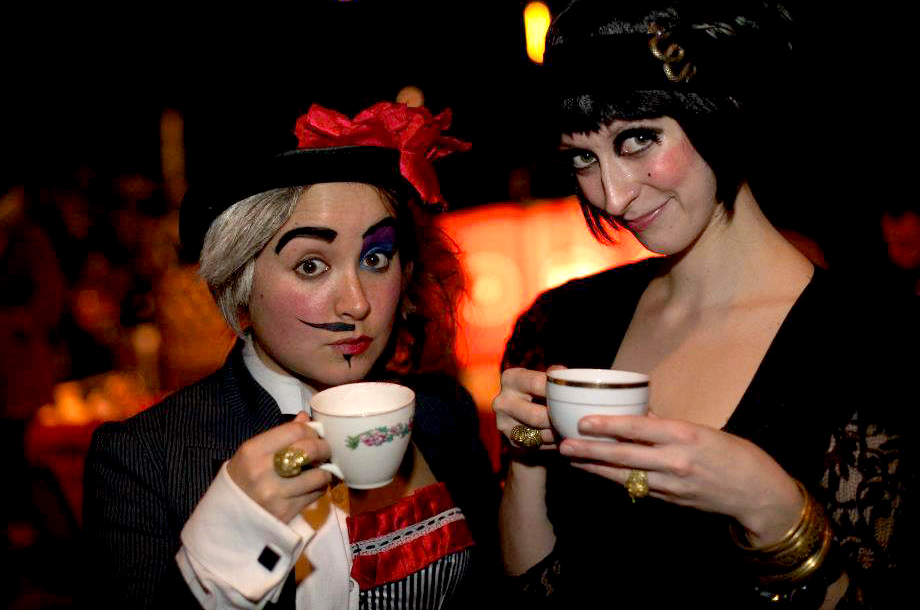 The Marxist sexual perversions of musical comedy duo EastEnd Cabaret have caused uproar everywhere they’ve performed, from Whitechapel dives and gentlemen’s toilets to the Edinburgh and Adelaide festivals. As they prepare for their biggest gigs ever at the Priceless London Wonderground spiegeltent, C.J. Lazaretti meets dissolute cabaretniks Bernadette Byrne and Victor Victoria for a gin-soaked tête-à-tête upon their recent return from a ten-week tour of Australia.

Last I checked, Victy didn’t and couldn’t have a passport. How did you manage to fly to Australia?

Bernadette Byrne: Victy technically wasn’t in Australia – especially not for immigration and tax purposes. But I did carry with me an extra-large accordion case as hand luggage.

Victor Victoria: Luckily it had air holes. An accordion needs to breathe.

BB: We met a lot of marvellous and strange people over there. Barry Morgan and his very large organ, for example.

VV: I found him strangely alluring, especially when he was playing that organ. The scene in Australia is still growing, it’s not quite as established as here at home, but it is definitely gaining momentum. The Adelaide Fringe is a wonderful place for Australian cabaret virgins to begin their education!

Australians can be quite forward, sexually speaking. Did either of you get harassed Down Under?

VV: You would be surprised. Australians are actually quite conservative, on the whole. They were a bit shocked by our material, but we know that they enjoyed it.

BB: Although one weekend, during the Adelaide Fringe, they had a massive car race which brought a flood of country boys into Adelaide.

VV: I believe the colloquial term is “bogans”.

Sounds like rough lads to me. You’re into that?

BB: They were fighting each other in the streets, but as soon as they were in our tent they were beautiful boys, paying attention and doing exactly what I told them to.

VV: This behavioural change may have been due to the fact that you were sitting on their laps. A lot.

What’s in your baggage?

BB: I don’t know, Victy packed mine for me. But I bought a lot of gin at the duty free.

VV: A musical saw, four tins of baked beans, a bikini-boardshorts swimming combo – the design of which I will be patenting – and a number of compilation tapes for long car journeys (this was Australia, after all). The mixes include some very romantic numbers that I recorded myself. For Bernadette. As a surprise. My rendition of Purple Rain is quite moving.

Trips are great opportunities to broaden your horizons. Did you pick up any new instruments? Learned any new…moves?

BB: I learnt how to eat a giant steak in under ten minutes.

Eating a large steak in ten minutes is not a big stretch, Bernie.

BB: I’d like to see you do it, darling. You couldn’t handle Australian meat. We may also have a new song about the perils of sand when it gets into all the wrong places. There was quite a bit of skinny-dipping.

VV: I was banned (unreasonably) from skinny-dipping. But I did learn how to play a unique musical fence in Queensland. The wind blows through it to create notes, and you can hit it with things, and even bow it like a massive rural violin. It’s mostly played to keep the dingoes away from your front door, though. 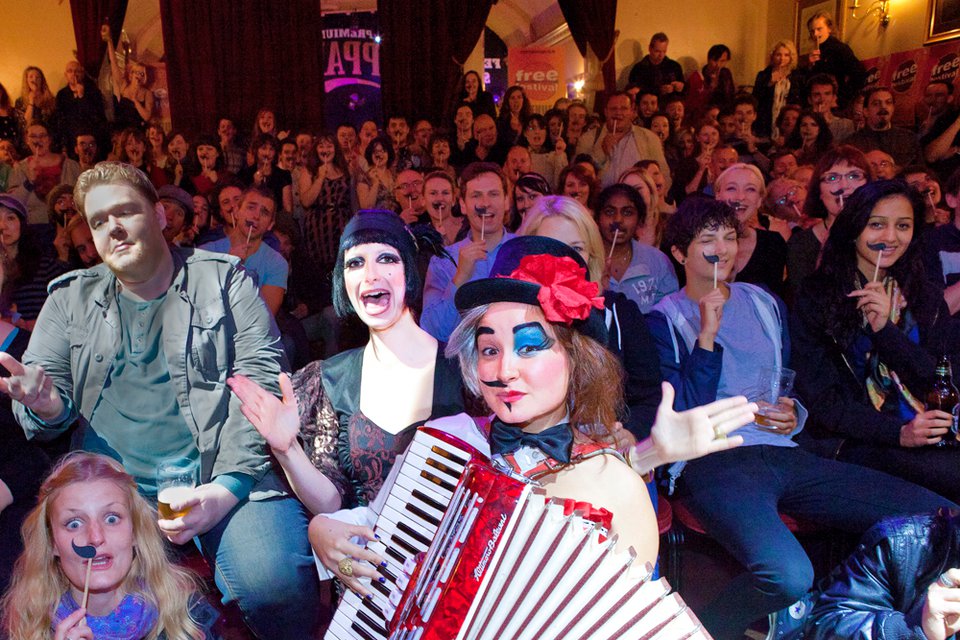 This 550-seater at Priceless London Wonderground looks like a bold step for you. Ever played in a spiegeltent before?

BB: We were lucky enough to play a guest slot with La Soirée on the last day of the Adelaide festival (also the day we won the Best Cabaret Award, by the way). We performed with them in a beautiful spiegeltent, the “Idolize”.

VV: And I got to use a headset mic, like a popstar! It was excellent. I was free to roam all over the tent with my accordion. To the audience’s peril, perhaps.

You’re performing under the sponsorship of a major credit card company. Are you censoring the show or toning it down in any way?

VV: Don’t be silly. Everybody knows that corporate types enjoy a good ping-pong ball. Or two.

I understand you’ll be doing some sort of “backstage reporting”. Is it as dirty as it sounds?

BB: It is very exciting, darling. We will be interviewing performers, audiences, giving backstage tours of the beautiful spiegeltent and heavily investigating the gin supply at the bars.

VV: What Bernadette means is that I will be interviewing the gorgeous people of the Wonderground, while she tries to drink all of the rider without anybody noticing.

VV: It is the most freeing, most inclusive type of performance that I know. And it’s an excuse for me to play as many instruments as possible.

BB: Cabaret is wonderful night out with friends, old and new. It is a dialogue between performer and the audience. It is sharing intimate stories, laughter and gin. Always gin.

Want to witness the sexual revolution with your own eyes? Catch EastEnd Cabaret red-handed at the Priceless London Wonderground spiegeltent on May 24th, June 22nd and July 26th. See www.eastendcabaret.com for tickets and details.