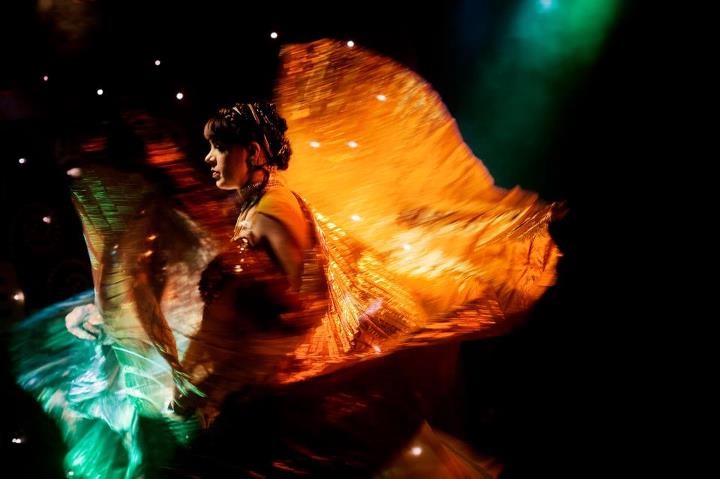 Over its different incarnations as an encore or preview taster for the London Burlesque Festival, Sexy Circus Sideshow has grown into an all-star showcase parading top names from UK variety. Reinvented as a month-long engagement for its debut at the Edinburgh Festival Fringe, the revue once again features a changing cast of British and international talent, but struggles with the new format, distributing acts unevenly in a haphazard hour of vaudevillian dares.

The show is largely uncompèred. Canadian duo The Monsters of Schlock announce some of the acts and stir the crowd occasionally, but their efforts overlap indistinctly with their own numbers, which include plenty of banter and direct audience engagement in themselves.

Unannounced, Joe Black opens the evening with a deviantly theatrical rendition of Sex Bomb, in which he literally licks a heckler into a more cooperative mood (being himself a seasoned host). Later, performance artist Xander Lovecraft, a striking carny midget figure, makes a brief comic cameo in which he is introduced only to introduce someone else in turn. Add to that the length of the Monsters’ routines – protracted freakshow stunts where spectators are asked to pull nails from a performer’s nostril or staple playing cards to the skin of another – and what you get is a concrete example of how a hazy structure can put good artists to waste.

Rather than the other way around as usual, it is the guest acts that end up punctuating the pseudo-compèring jumble. They’re mostly good: Anna the Hulagan contributes the flaming hula-hoop striptease that won her an award at the World Burlesque Games, and Betty D’Light headlines the set with a fierce showgirl skit full of aggressive sensuality and rousing pizzazz. Other confirmed names in the Edinburgh run of Sexy Circus Sideshow include Cat Aclysmic and Sarina del Fuego, all recurrent temptresses from previous Chaz Royal events.

I’ve yet to see a Chaz Royal show without exuberant, top-notch burlesque acts, and Sexy Circus Sideshow is no exception. As far as their presentation is concerned, though, I’ve yet to see a bigger shambles than this.