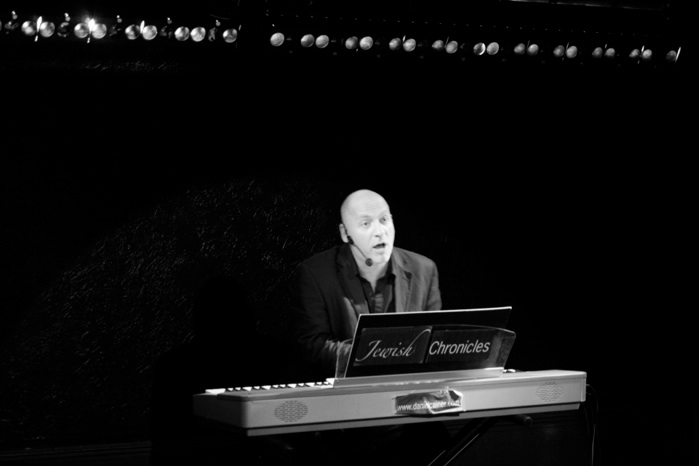 Leeds multi-instrumentalist Daniel Cainer returns to the Edinburgh Festival Fringe with a repertoire of biographical songs predominantly culled from his album Jewish Chronicles. Like the two previous eponymous shows based on that release, The Jewbadour tells stories from previous generations of his family with formidably subtle musicality.

Cainer excels in witty wordplay a la Cole Porter. His unexpected rhymes go hand-in-hand with his casual banter and sophisticated tunes. Singing and playing keyboard, he demonstrates a confident range as he moves from the low-key introspective immigrant lament of God Knows Where to the lively klezmer parody of Bad Rabbi, a real life story about a drug-addicted, whoremongering Manchester rabbi who faced drug dealing charges in 2009.

The lives Cainer chronicles are sometimes remote, like two immigrant tailors who died long before he was born, and sometimes as close as his uncles and aunts. All of them, however, are eventful and dramatic, fighting poignant personal battles around everything from adultery to post-conversion prejudice – “We’re Jews, we don’t list Jesús in our who’s-whos,” hears his aunt Naomi after becoming a born-again Christian. Told in his flowing, well-rounded verse, they become deeply absorbing tales of extraordinary pathos.

His arrangements, though beautiful, don’t lend themselves easily to sing-alongs, leaving the audience hesitant to join in on closing number Surbiton Washerama. By the same token, multiple false ends make it hard to know when to clap at times. Those inconsistencies get especially prominent in the context of an hour-long performance that features only five songs, most of them around or well beyond the ten-minute mark. As a whole, The Jewbadour feels more like a singer-songwriter concert than a cabaret set.

But the greatest obstacle to your enjoyment here is the dreadful acoustics of the Mood Nightclub, muddy and prone to reverberation in its tomb-like ambiance. If you can get past that, The Jewbadour is an instigating storytelling journey loaded with humour and feeling, regardless of which label you stick to it.