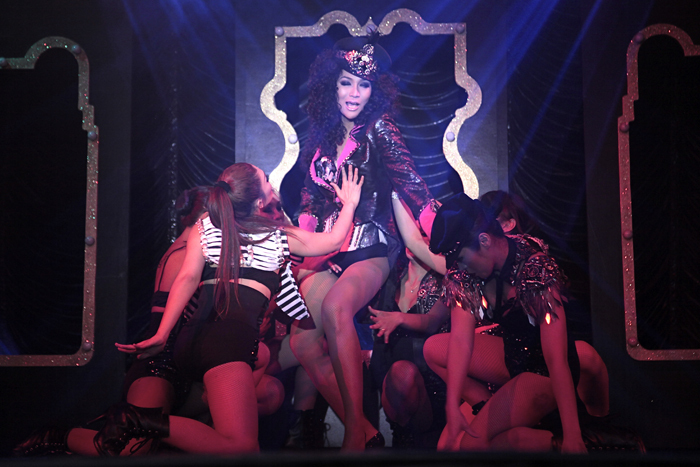 In my experience, Thai musical revues starring lady boys (the surgically modified transvestites locally known as kathoeys) are often designed for easily shockable international tourists. The Lady Boys of Bangkok: Carnival Queens targets a sturdier, predominantly female audience, as evidenced by the presence of four times as many ladies’ toilets as gents’ at the Meadows Theatre Big Top. The many hen parties and girlfriend groups in attendance are determined to have a good time, and lap up the risqué antics of the androgynous ensemble.

As expected, the show has fabulous costumes and masses of make-up and glitter from the start, but other than that consists of lip-synching and fairly lacklustre dance routines to Lady Gaga, Beyoncé and the Phantom Of the Opera soundtrack. Surgical body modifications may give the cast a female look, but don’t turn them into dancers. The routines are worked through without any pizzazz or style. With glassy-eyed stares and fixed smiles, the dancers give nothing of themselves away.

The Lady Boys of Bangkok: boisterous, well-paced fun that brilliantly shocks without offending

The word freak show comes to mind. The punters at my table were gasping at the sheer inappropriateness of it, but laughing fit to burst. It’s a great conversation starter: the “I can’t believe I just saw that” opening gambit made its way around the room. Expect a lot of face-holding followed by helpless giggles.

Like the naked brawl scene in Borat, bullfights and public executions, you may disapprove of it or be appalled, but it’s nevertheless compulsive viewing. Even if it may prove a social worker’s nightmare, Carnival Queens brilliantly shocks its fans without actually offending them. And yes, patrons do stare intently trying to tell the “shes” from the “hes”.

Crashing through normal standards of decorum, The Lady Boys of Bangkok help promote transgender acceptance to a broader spectrum of the population, beyond the usual Edinburgh Festival Fringe theatre and comedy crowds, in a way the more overtly political shows could only dream of. Go and see it, but don’t blame me if you come out as a new person.