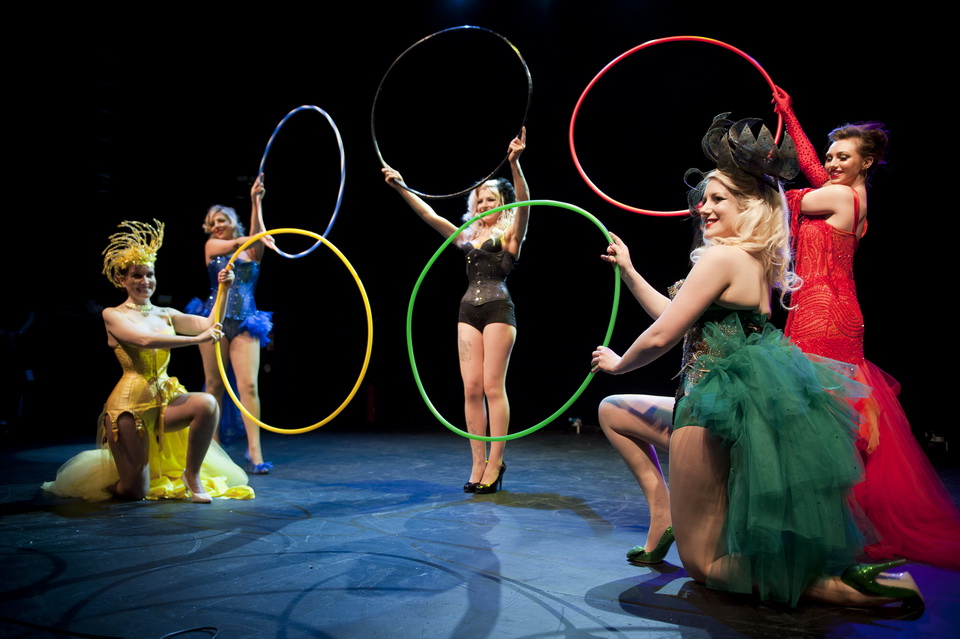 Does size matter? Glasgow revue Club Noir Burlesque calls itself “the world’s biggest burlesque club”. If The Games, its Olympic-themed one-off special at the Edinburgh Festival Fringe is anything to go by, bigger is not always better. When the bulk of a show consists of burlesque acts as unimaginative and poorly executed as these inane pantomimes and lacklustre strips, with only a handful of disparate speciality acts to spice it up, you want it over as soon as possible.

That said, the engagement is not the bump-and-grinding marathon its announced duration of six hours suggests. The two core variety sets last roughly an hour each, with the rest of the time taken up by DJs and Dirty Harry, a Blondie tribute rock quintet complete with a Debbie Harry look-alike vocalist.

Put a ring on it: the much-anticipated Olympic conclusion to Club Noir Burlesque: The Games

Though unusual for a variety show, the opening band is entirely appropriate for the ambiance: the HMV Picture House is a proper gig venue, with a barricaded high stage and a standing capacity of 1,500 people. If an atmosphere of vintage decadence is what you’re looking for, you won’t find it on the stalls floor, surrounded by barefoot drunken girls clutching their stilettos with one hand and their plastic pints with the other.

The best burlesque you’ll see here are weary struts to old jazz like Why Don’t You Do Right, some of them in time to the beat. Vanity Kills hurries out of her granny panties before a sloppy champagne douse, while Chelsea Dagger, dressed like the Statue of Liberty, attempts an American tribute routine with repetitive ribbon twirling and clumsy dancing to a hip hop tune. Other tributes are even flatter, like a series of minute-long London-inspired skits where a pearly queen prances around to London Calling and a girl in a beefeater costume simply marches around the stage.

A segment called Film Noir (projections announce titles on both sides of the stage) sees dancers Morgan Le Faye and Dougie Walker play a femme fatale and a gangster in a striptease at gunpoint. More than the predictable twist, though, it’s the pair’s empty expressions and tense moves that make the promising double act a tedious dramatic sketch. Show producer Tina Warren offers little more than a few angry faces in her highland warrior act. Assuming half-hearted pin-up poses, her sister Bunny Warren dons a purple cloak and crown for a queen routine. Her Highness proceeds to struggle with her costume and nod at an offstage assistant to shower her with money at the end. In Warren’s defence, though, there isn’t much suspension of disbelief left in the number by that point anyway. 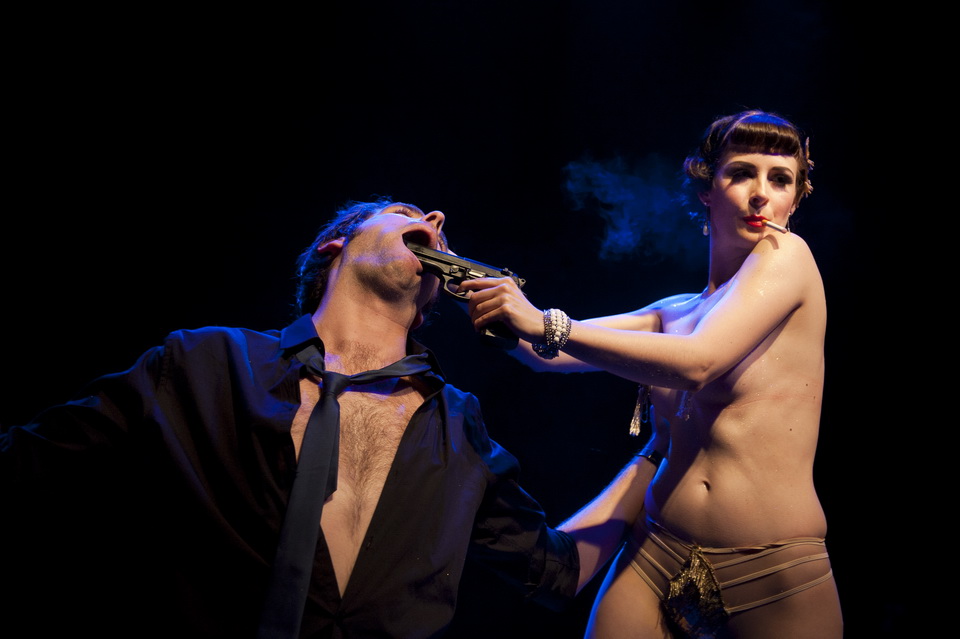 How many times can you see the Chariots of Fire slow-motion running gag in a single bill? That clever nod to the Olympic Games shows up in the B-boy breakdance skit by athletic trio Random Aspekts, as well as in Shane O’Regan’s intelligent pairing of unamplified tap dancing and a loud backing track. The speciality contingent also includes Tumble Circus and astounding beatboxer Bigg Taj, a one-man rave who produces full techno textures with his mouth and a microphone.

The evening gets no additional zest from compère Daddy Single, who risks a few hasty jokes amidst largely inconsequential descriptive banter – especially ineffective in an extended affair like this. With its 16-act double bill and other inflated figures, Club Noir Burlesque is at best an interesting experiment in the variety show format. At its worst, it’s probably the world’s most overpriced amateur night.