All Eyes on the Uke Of Edinburgh 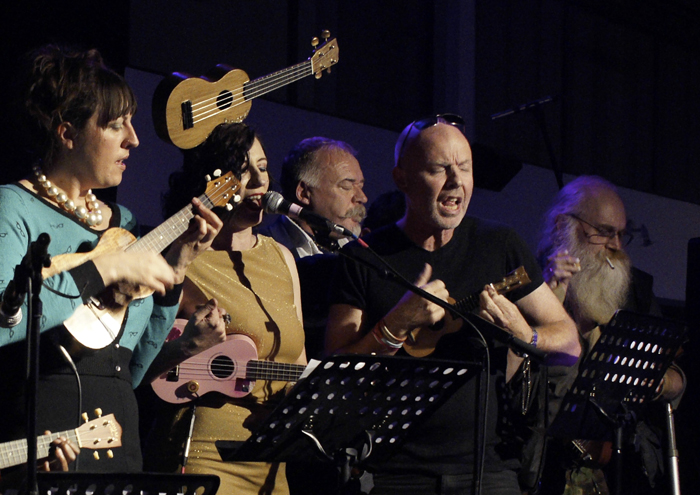 Every date of Ukulele Cabaret at the Edinburgh Festival Fringe crowns a new winner of the Uke of Edinburgh Award, chosen by an audience panel of judges. Host Tricity Vogue speaks to previous winners of the prestigious accolade and finds out their stories of passion, perseverance and blatant foul play.

The Uke of Edinburgh Award has been changing the lives of ukulele players at the Fringe since 2010. It consists of a golden ukulele, worn on my head throughout the nail-biting competition, and strummed by the nightly winner in a moving ceremonial culmination of the show.

Geek songstress and fellow ukulele player Helen Arney came up with the pun at the Latitude Festival in July 2010, and generously let me have it. Many gin and lemons and several rounds of You Are My Sunshine later, plans for the competition had solidified. Arney was officially appointed scorekeeper for the first year’s awards.

It was at the photoshoot for my 2010 Edinburgh poster with designer and photographer David Windmill that I first put a ukulele on my head. My trusty pink Mahalo was held on with green garden wire, later removed with the magic of Photoshop. For the show itself, costume designer Emma Threadneedle volunteered to make me a real ukulele hat. Her masterpiece has taken two festival runs to perfect, but now balances effortlessly on my head, and stays in tune for almost the entire show.

This is what the Uke of Edinburgh means to this year’s hopefuls and some of the award’s previous winners.

The most profound change in my life was meeting my double act partner, Tricity Vogue. Within months of winning the coveted award, the great Miss Vogue hand picked me to form The Janus Sisters. Soon I was catapulted into a heady world of late night sing-alongs and plucking sessions, not to mention a few close shaves with some rather intense fans – it appears that pink Lycra catsuits do work for some people.

I should point out that I don’t actually play the ukulele in this double act, as my three chords were not quite enough and Miss Vogue is something of an expert. But I do work very hard on the shaky egg, triangle and swanee whistle.

This year I am back with a vengeance. Let’s just say, watch out other contestants…mama’s got a brand new chord, and she ain’t afraid to use it.

Learning the ukulele is not just a fun thing to do, it’s a journey of self-discovery, it’s a team effort, and it offers a sense of discipline and achievement much like the Duke of Edinburgh award that inspired it.

Given that we’re in the rainy city for the Fringe, it’s also similar to the expedition part in the eponymous youth scheme: kagools, wellies and emergency flares are the essential kit.

Taking part in the Uke of Edinburgh Award was my dream, what I’d always wanted, so winning it twice last year was a dream come true times two and the most important thing to have happened to me in the whole of my life – even more exciting than the time I sat next to Barry Cryer on a train.

When I return to compete in the Uke of Edinburgh Award this year, I’m going to try to own the stage, and to own my own songs, because that is the secret to success. I want this so much.

After winning a Uke of Edinburgh Award, I’ve become lazier. I expect more for less, I feel a general sense of entitlement when I go to three-star hotels and mid-range eateries like Little Chef or Harvester. Now that I’ve won, I feel my work is done.

I’ve been asked about my strategy for re-securing the title, but I hadn’t realised I was a returning competitor. I thought I was a returning champion there to awe the masses with my presence. Excuse me, I need to call my agent. Well, my agent’s agent. OK, my mum.

Winning the award would mean I can finally put a trophy in the empty space on the shelf where my university degree should have been, had I not dropped out. I expect to get upgraded on all flights and trains from now on, and have people begging me to sign their tits. The most exciting moment will be bribing the four judges with chocolate and sexual favours.

My strategy to win the title is a Tonya-Harding-style attack on the competitors. In honour of it being the year of the Olympics and all.

Winning this award would be like a beautiful tuneful oasis in a month of blood, sweat and inevitable rainfall. My life would transform forever into one long string of parties and endless plucking. The most exciting moment would be seeing so many ukuleles all in one room.

My strategy is to bamboozle the audience by playing a character, which will (I hope) detract from the fact that there will be far better players than me in the room. It’s also my punishing training regime (much like those of the Olympians), which involves specific messing around and more general messing around.

Correction: this article was emended on August 6th, 2012. It previously listed Ria Lina as a one-time winner of the Uke of Edinburgh Award.