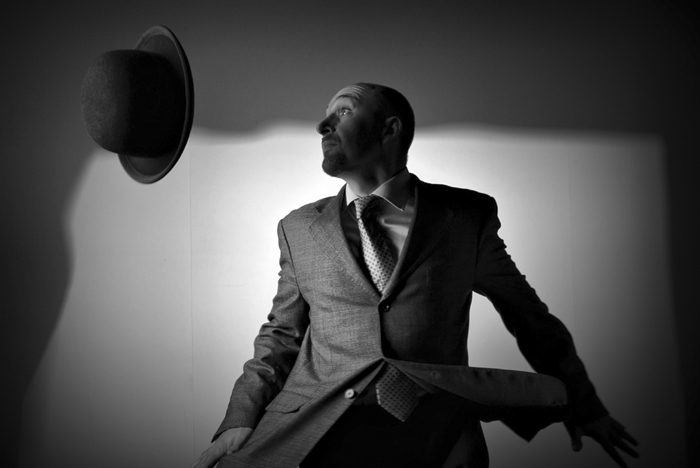 Gentleman juggler Mat Ricardo has been putting together a new show for this year’s Edinburgh Festival Fringe. Catch a glimpse of what life is like behind the balls and the suits in this exclusive series for This Is Cabaret.

Last week I performed my first one-man show, Three Balls and a New Suit, for what will probably be the last time. It was the end of a two-year journey that started when Tricity Vogue bought me a cocktail at The Wet Spot revue in Leeds and mentioned a spare slot at the Edinburgh Festival Fringe, which she thought I should fill. “Sure,” I slurred. It’s her fault.

I’d always thought that I’d try my hand at something like this at some point. But when you spend your life cannonballing from one gig to the next, working hard to encourage wolves away from doors, it’s easy for “some point” to become “never”. It would have been dim and cowardly not to take advantage of the chance, though. Within a week I had a venue, a time slot and no show.

I had some ideas, though, and a month-long gig in Germany where I could spend every day in a hotel room writing. So that’s what I did, and I came back with what I thought might be a show.

A couple of Edinburgh runs, some nice reviews and an actual grown-up theatre award later, it’s time to put that show to bed. Time to put that battered notebook in a drawer and open a fresh, terrifyingly blank one.

Today I start writing the new show. I have a full run at this year’s Edinburgh Festival booked, along with some preview shows in London and Cambridge. What else do I have? A title – Vaudeville Schmuck – and a bunch of Post-It notes from various mid-priced hotels with stories, tricks and gags scrawled on them. Most importantly, I have a question.

The way into writing anything long-form is to find a question. If I can ask a question at the top of the show and answer it at the end, then I have a structure. And if I can fill the bit in between with tricks and stories, then I have a show. The stories have yet to be written, and I’m not sure about the answer, but I have the question – I know what I want to talk about.

I want to talk about the living history of variety: how the gags, tricks and bits of business created by the long-gone greats of circus, comedy and variety are kept alive by the current performers of these art forms. Precious hand-me-downs, kept safe and passed on.

I want to talk about the joy of knowing that when you see a great variety act, the chances are you’re seeing a few generations of the acts that came before, that influenced, inspired and somehow encouraged the one you’re watching. Vaudeville DNA. Building blocks of shtick.

But right now all I have is a pile of Post-It notes and a blank notebook. And eight weeks. Well, six until the previews. Erk.

Spent the last couple of weeks designing flyers, writing blurb, talking to producers, even doing the occasional interview about a show that totally doesn’t exist yet. It’s scary. I try to maintain a grown-up, professional, successful showbiz façade of confidence and artistry, when in my head the voices are screaming “all you have is a pile of Post-It notes and a title that most people can’t spell! Run away! Stop lying to them: there is no show!”

Despite the efforts of the Internet, sandwiches, Halo ODST, playing with my cat, and all the other things that distract me from work – and contrary to the opinions of the voices in my head – today I finished writing the show. Well, at least the first draft. It’ll need a lot of re-jigging, polishing, cutting stuff, adding better stuff and learning of tricks, but I’ve got the beginnings of something.

There are a couple of new tricks in there, lots of new words and some video sections. Somehow it includes talking about the Battle of Hastings, and I have no idea how long or interesting it is, but it’s finished. I clicked “save” and breathed out.

Mat Ricardo: Vaudeville Schmuck plays in the Edinburgh Festival Fringe from August 1st to 26th (not 6th, 13th or 20th)   at The Voodoo Rooms (Venue 68A, EH2 2AA), 17:45. See www.matricardo.com for details and tickets.

Can’t wait until August? Catch the previews of Vaudeville Schmuck at the Cambridge Comedy Festival (July 19th July, 19:30) and the Revival Festival at Marylebone Gardens, London (July 23rd and 24th, 19:30).

Photos courtesy of the author