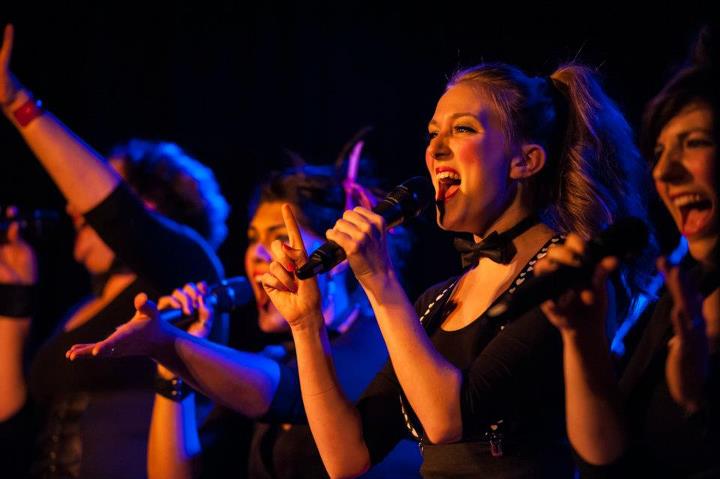 As far as feminist statements go, Australian sextet Lady Sings It Better has got one both simple and inventive: they only sing songs written by men. Ideological appropriations aside, the group’s eponymous debut show at the Edinburgh Festival Fringe includes strong live backing from a dynamic trio, as well as a fair share of droll arrangements marked by light-hearted satire. Those, however, are not the majority. Most of the setlist falters both in terms of music and humour.

When tackling AC/DC’s You Shook Me All Night Long, for instance, the Ladies sing through brief falsetto monosyllables in mock prissy affectation, leading to an incongruous orgasm-fainting gag. Opening number I’m Your Man, by Leonard Cohen, gains the vague contours of a prayer in its quiet serenity, but soon grows baffling with awkward pauses and sudden a cappella shifts. Their plainer spoofs, by contrast, are much more interesting – after Artistic Director Maeve Marsden’s brief introduction about her teenage life as a lesbian, Jessie’s Girl gets an entirely new colouring. Equally gripping is their take on Closer by Nine Inch Nails, coating the industrial anthem with marching-band vivacity.

An unusual luxury in cabaret, the backing trio behind Lady Sings It Better makes a big difference. Consisting of Musical Director Dr. Joe Twist on keyboards, Lauren Allison on drums and Hannah James on upright and electric bass, they keep a driving beat and zesty tunes for most of the repertoire. Allison’s grooves are particularly spirited.

Can the Ladies keep up? Undoubtedly. The sextet members are all accomplished vocalists, coming from backgrounds as diverse as rock bands and musical theatre, some of them with academic training as well.

They can sing. What they cannot do is front. Each singer spends most of the show doing their own antics, rarely coming together with a unified stage persona. For some of the numbers, like slow ballad Try a Little Tenderness, only two or three of them sing, while the others stand aside, looking absently around. Especially given the disparities in the material, the sight of fully costumed, fully lit performers lingering onstage for no reason is distracting beyond recovery.

As a whole, their hit-and-miss attempts at flippancy seem gratuitous and distant, like watching friends goofing around amongst themselves. You might as well save the ticket price and goof around with your own friends. The ladies may sing better than them, but that doesn’t mean they’re putting on a better show.