The True Stories of Waiting for Stanley 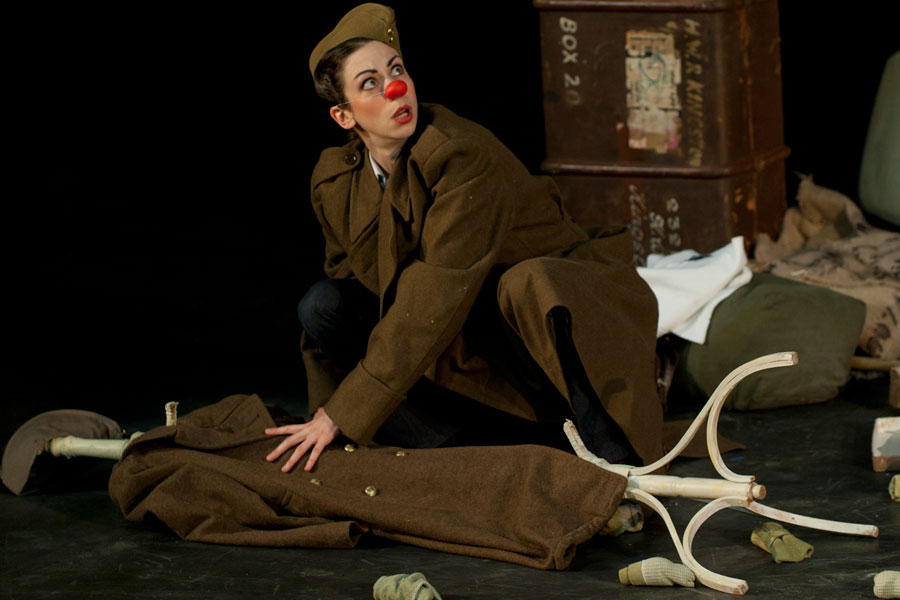 Acclaimed play Waiting for Stanley weaves its poignant tale of wartime hardship from real events in the lives of British men and women during the Second World War. Amidst preparations for the show’s upcoming run in the Edinburgh Festival Fringe, actress Leela Bunce (AKA clown burlesque performer Audacity Chutzpah) remembers some of the most dramatic interviews she’s conducted.

Everything in Waiting for Stanley is based on true stories. My history degree finally came in handy as I spent many delightful hours being plied with tea and digestives, interviewing veterans and women who had lived, worked and fought through the war. I also took myself off to the Imperial War Museum archives to read hundreds of diaries and letters.

Letters are a major part of the show. It’s the fragile thread that joined wives and mothers with their husbands and sons far away. When a letter arrived, there was a great sigh of relief: he was alive. When they didn’t arrive – which happened regularly, given the hugely complicated postal route across battle lines, land and sea to Britain – then there was the waiting and the worry. Perhaps this was just a delay. Perhaps it’d come tomorrow. Perhaps not.

Amidst the uncertainty, the heartache and the fatigue, I found moments of great joy, comedy and happiness in the stories I heard. One Londoner, Iris, who was 17 when war broke out, got a job driving the Home Guard to and from their sentry posts. This was a fabulously exciting job for a young woman, although she was tiny and couldn’t quite reach the pedals, so had a brick on the gas pedal and sat on a pile of blankets to see over the wheel.

Iris had actually wanted to be a dispatch rider on a motorcycle, but was too light for the heavy bikes. So, for her, our main character becomes a dispatch rider. I hope when we tour the show in Devon, where she now lives, she’ll be able to see it happen.

Suitcases form the bulk of the set, and for months I had my eye out for old trunks and cases. Passing an antique shop in Deptford, I bought a beautiful old trunk with a soldier’s name painted on it. I googled that name and found a Royal Engineers tribute page by the man’s daughter. I posted a message and a photo of the trunk in its starring role onstage, and months later got an amazingly detailed reply from the soldier’s grandson, telling me all about his late grandfather and the fascinating and dangerous role he played in Burma during the war.

These kinds of lovely, unexpected connections keep happening with Waiting for Stanley. I wonder if it’s because the show has so much heart. The public responds to that. Still, people often ask why I do the show in clown. Why the red nose?

The clown operates from the heart rather than the head. Amidst all the facts and figures about war, casualties, troops and politics, I wanted to know what was going on beneath the stiff upper lip, what it felt like to live through it. The central character doesn’t speak and this also felt important. It’s easy to hide behind words, to get lost in language, and the clown can dive straight into the heart of the story.

The Cost of Clowning Around in Edinburgh

I’ve been blown away by the response to our Edinburgh fundraising campaign. We still have a £2,000 hole in our funds for the Fringe run, so all donations are hugely appreciated.

Check our website. Finger In the Pie’s Artistic Director Alexander Parsonage has created a wonderful train line “fundometer” – you can see your donation move me up a British map closer to Edinburgh.

We’ve also launched an I’m Waiting For photo campaign. Everyone can download a banner, write their own “I’m Waiting For…” message and upload it to our online gallery. We invite everyone to get involved.

Waiting for Stanley plays in the Edinburgh Festival Fringe from August 2nd to 26th (not 13th) at Assembly Roxy (Venue 139, EH8 9SU), 15:45. Want to help Leela get to Scotland, and get free tickets to other shows? Check out www.fingerinthepie.com/Stanley/Support_Us.html

Read This Is Cabaret’s review of Waiting for Stanley.