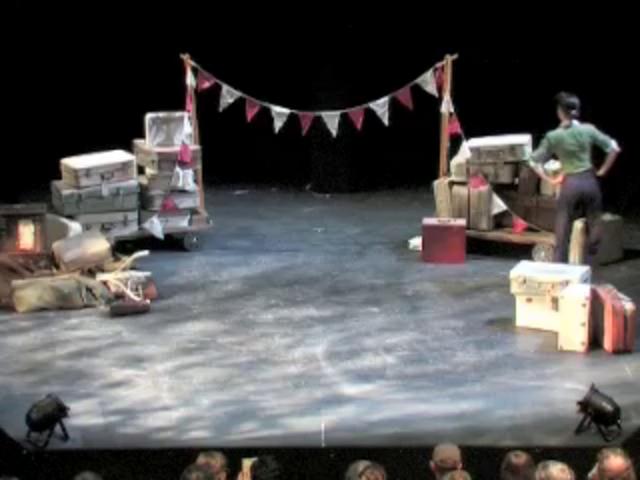 Hands up who talks to themselves sometimes? Or makes up scenarios in their heads? One-woman play Waiting for Stanley meanders through fantasies like the best daydreams do. Mixing song, puppetry and animation, Leela Bunce (AKA clown burlesquer Audacity Chutzpah) tells a real-life wartime story filtered through the land of make-believe. 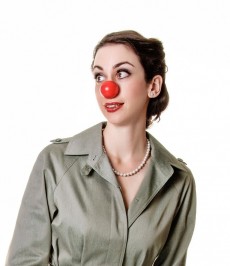 It’s 1945 and a lady with a bright red nose waits at a train station for her man Stan to return from the front. Surrounded by suitcases and with time on her hands, she sucks us into her madcap mind as she fills the long minutes of waiting with tragicomic scenes anticipating their reunion.

As well as plenty of playful fantasy, we learn the story of her war through clowning that’s funny, silly and sad all at once. Shy sometimes, then wildly over-the-top, she appears as both a mother and a motorcycle dispatch rider. We meet a housewife empowered by the war and also a woman alone, her husband and son both sent away.

Rather than bold and brash, Waiting for Stanley is gentle and sweet, but never tame or predictable: unusually interactive even for modern theatre, it includes a sing-along with great toe-tapping wartime tunes and an opportunity to dance.

The mime and clowning is punctuated with puppetry – as in a hilarious sketch where a brilliant dough baby morphs into Winston Churchill – and live animation, including a shadow Blitz scene projected onto a line of washing. Everything onstage is more than meets the eye: a suitcase, for example, quickly transforms into a steam train puffing talcum powder via Bunce’s masterful trickery.

Sadly, Waiting for Stanley played for one night only as part of the Postcards Festival at Jackson’s Lane Theatre, with no further London dates prior to the show’s run at the Edinburgh Festival Fringe in August. Fans of Leela Bunce should also look for future dates of her other projects, like 2012: an Olympic Vaudeville and the feminist cabaret shows of The Blue Stocking Society.