Review: Up and Over It 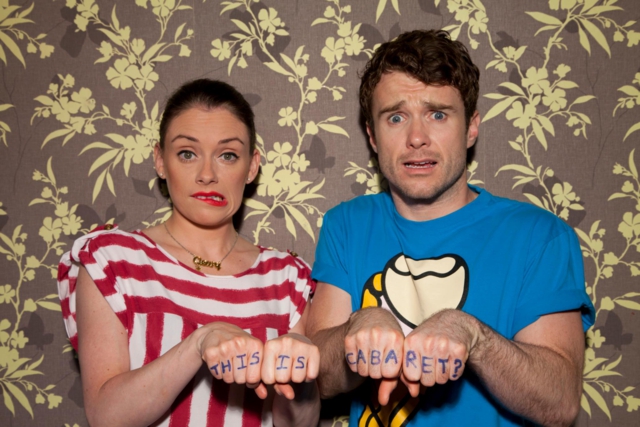 After performing around the world and in award-winning ensembles like La Soirée, Suzanne Cleary and Peter Harding take their talented Riverdance alumni selves to the Priceless London Wonderground for one night only. Up and Over It shake up traditional Irish dance with an elaborate, electro-pop- tinted footwork extravaganza both beautiful and breathtakingly funny.

The duo taps and jigs their way through complex theatrical skits. In one moment they do a brilliantly macabre robotic dance to Afro Celt Sound System’s Lovers Of Light. Later, they slap and taunt each other in the fighting couple hand-dancing routine[review: weekend at wilton’s] that is making the cabaret rounds as a guest act at Boom Boom Club, La Rêve and other revues. During their chav ballerina number, the pair is joined by exuberant no-nonsense troupe The Breakfast Club Dancers. In tracksuits and tutus, they launch into a powerful,aggressive choreography to D.A.N.C.E. by Justice.

Up and Over It: clever comedy and contagious energy

The Irish roots of Up and Over It are always close to the surface. They look back, but with irreverent satire, tracing the origins of Riverdance to slapstick antics by catholic peasants with arms tied behind their backs and soles so hard they could tap-dance barefoot. Similar bits of clever comedy come from many video projections, created by co-writer Jonny Reed. One of the more contemporary pieces, with Matador’s Klay for a soundtrack, alternates near blackouts with flashing lights. It engenders a sensory experience akin to a club night, but doesn’t leave you much to watch.

The show gains even more diversity with the inclusion of a guest act. For their Wonderground date, they welcomed Bourgeois and Maurice. Singing their original tracks Dull People and Take Me Away, the cabaret mavens had the room in stitches with their deadpan banter and lyrics.

Relentlessly inventive, the show is an upbeat, dance-tastic hour of delightful spectacle. Their energy is contagious: I couldn’t help but wiggle to the tunes while watching them. Up and Over It is just the sort of act that makes you want to put on your dancing shoes.

Photos courtesy of the performers, exclusively for This Is Cabaret