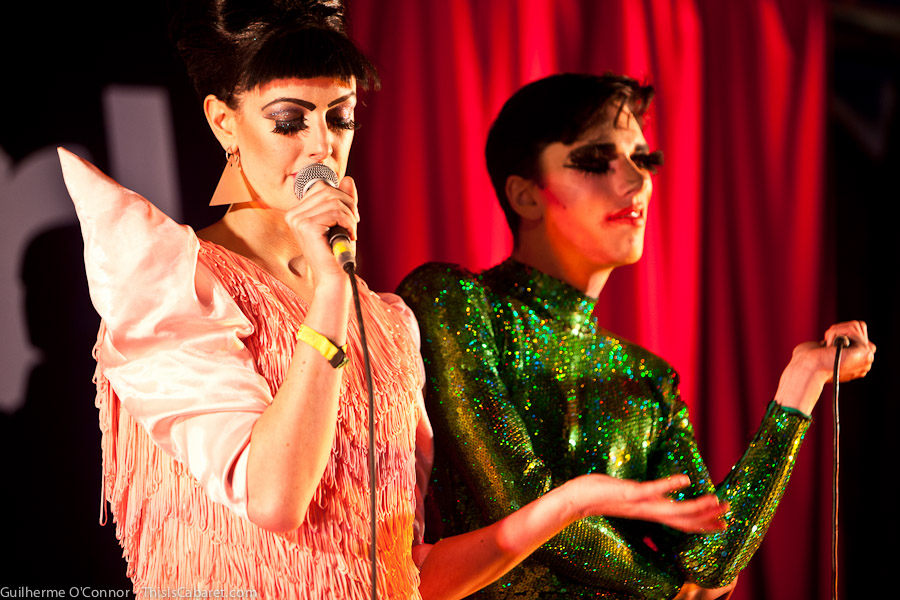 Do cabaret and wellies go together? The second edition of The Apple Cart festival at Victoria Park held eight unflinching hours of non-stop mayhem in its cabaret tent, under non-stop rain. It was a muddy affair. Literally as well.

Rising popular demand for variety is always a pleasant prospect, but there’s a line where expansion bleeds into reckless bandwagon-jumping. And it’s not a blurry one, either: it’s a solid four-foot-tall metal barricade of a line separating the stage from the public. Whatever expectations you could hold about cabaret intimacy and audience participation are promptly shattered when you’re shivering in a draughty square tent open on three sides, peeking over a fence while backing tracks blast out of rock-gig-sized amps. They did have tables, at least. 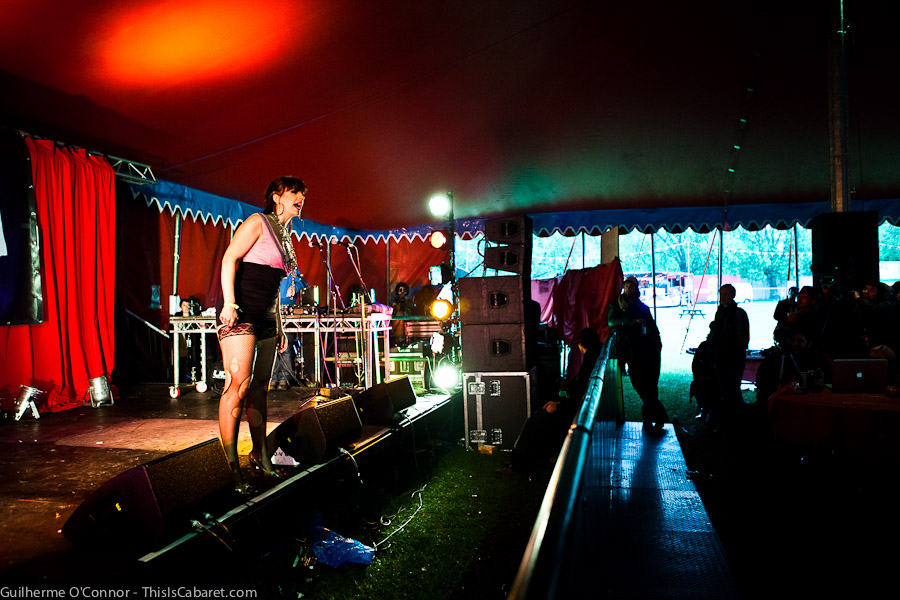 It’s no surprise that the most compelling acts were also the ones who crossed the barricade to confront the crowd. Fancy Chance straddled a spectator to steal a kiss during her notorious drag king Prince tribute. Kiki Kaboom, meanwhile, went beyond talking the talk in her excellent Chavarella burlesque number, confiscating a camera phone from a persistent shutterbug at a front table. Barricade or not, you don’t mess with a broad who flings chewing gum at the public.

Lip-synching made up nearly half of the 28-act bill. Drag troupe The LipSinkers performed twice, with individual members Ryan Styles and John Sizzle contributing additional routines of their own. Most of the numbers consisted of obvious choreographies illustrating the lyrics of hits like Can’t Take My Eyes Off You with the same hammy smiles from beginning to end. Watching inventive allegories like drag queen A Man to Pet letting a heart-shaped helium balloon fly at the end of Love Is in the Air has all the entertainment value of high school plays, except those don’t cost £40 a ticket. 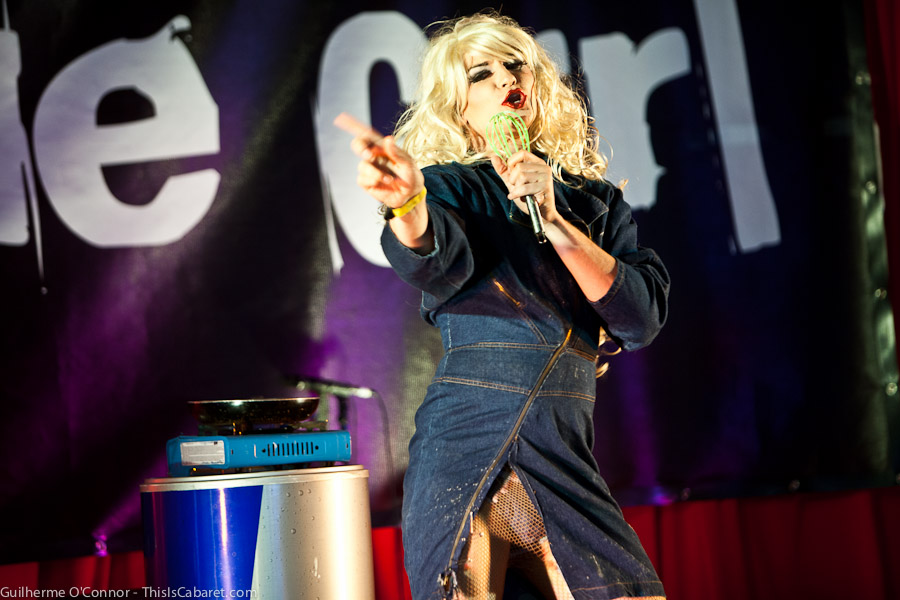 Another lip-synching drag queen, The Fabulous Russella, had literally more substance to offer, making a pancake onstage in a charmingly shambolic slapstick skit to the soundtrack of Christina Aguilera’s Ain’t No Other Man. However, the number lost most of its appeal in the arid ambience of the venue, as did Dickie Beau’s accomplished mime to a Kenneth Williams interview recording, which struggled to compete with the outside noise.

The cavalier attitude and beat-perfect comedy of politically incorrect duo Bourgeois and Maurice, by contrast, is weatherproof and venue-proof. Sardonic cuts like Tax Me and I Can’t Live in London poke at sensibilities across the board, attacking everything from ecological discourse to the financial sector, with lively tunes on keyboard and acoustic guitar to boot. Drag queens Holstar and Lavinia Co-Op (of influential comedy troupe Bloolips) had more cabaret in store – the former with a perfunctory run through songs like I Need a Hero and Somebody to Love, the latter with feeble protest piece I’d Like to Do the Mambo But the Suit Says No.

Other featured regulars of London’s variety scene included drag comic Myra Dubois, Piff the Magic Dragon (also performing at The Apple Cart magic tent) and Irish hand-dancers Up and Over It. Jazz vixen Holly Penfield headlined the evening with her usual ferocity – i.e., pouncing on audience members irrespective of gender, age or press affiliation. She did see my badge before throwing me on the table and satisfying her base instincts. She just didn’t give a damn about it.

Halfway through this bleak afternoon, it seemed like nothing else could go amiss. The illusion was promptly dispelled as artists that had little or nothing of cabaret in them took to the stage. The noisy live PA set performed by electro MC Feral Is Kinky makes more sense in a warehouse party than in a variety show, while I Am Fya’s repetitive synth R ’n’ B would sound tedious in any bill.

It was not all bad: with sombre grooves and nonchalant vocals a la Natalie Merchant, Willis’s acoustic blues-folk ballads are stirring and poignant enough to merit a gig of her own. Canadian guitarist Mae Martin, on the other hand, offered nothing beyond the run-of-the-mill confessional jokes that flood Edinburgh pubs in August, alternating between minute-long songs and sprawling pointless banter. I can’t see many explanations for the inclusion of these acts here other than overbooking in the comedy and music tents.

Cabaret is typically, historically and even etymologically an indoors genre, and for a reason. Whether your motivation to go to a variety show is controversial entertainment on the fringes of acceptability or nostalgic ideals of decadence, you’ll find the open air – at the mercy of the elements, non-existent sound isolation and overpriced lager in plastic cups – to be an effective mood killer. Even if just for the sake of innovation, though, there might be some outdoors alternative to supper clubs, small theatres and spiegeltents that could deliver a pleasant experience. The cabaret tent at The Apple Cart festival is just not it.