Holly Penfield: A Horsewhip for a Magic Wand 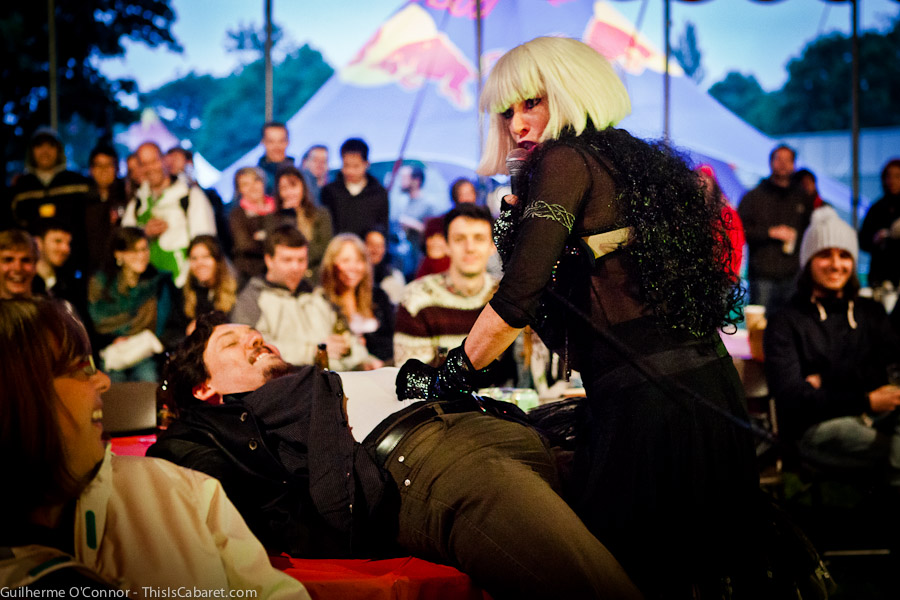 Are critics untouchable? Literally not. Gui O’Connor witnesses cabaret legend Holly Penfield rough up C.J. Lazaretti at The Apple Cart festival, vindicating scores of panned vaudevillians (and putting on a killer act in the process).

Ignoring the elementary premise that cabaret is interactive, a proper rock concert barricade separated performers from their public in the cabaret tent at The Apple Cart festival. Do variety performers need to be protected from overenthusiastic fans like rock stars do? Or is it the other way around? None of that matters when Holly Penfield is on: as our senior editor C.J. Lazaretti found out, nothing can protect you from the San Francisco diva.

As with everything else in life, there are those who come across a barrier and give up. Others feel challenged to cross it. Holly belongs in the latter group. It was hardly surprising, but thoroughly exhilarating to see her jump the fence, walk to the critic, splay him on a table and strip him of clothes and dignity before dragging him on to the stage.

At that magical moment, the totally inadequate open tent became a real cabaret. After a long and uneven bill, the formidable assault was the rush of adrenaline the crowd needed. Many people who left earlier didn’t see what a thrilling and unique live experience the genre can offer. Those who stayed, though, will remember dearly how Holly Penfield conjured a wondrous spectacle using her horsewhip for a magic wand.

The American jazz hellcat’s reputation for intense audience participation stunts precedes her. Not even an august destination like the Savoy Hotel is safe from a little roughhouse from her. It wasn’t the first time C.J. was on the receiving end of the magic wand, either. “Holly Penfield is the reason I don’t go to Nightjar anymore,” says the victim. “Every time I go there, she makes me crawl onstage and whips me with that goddamn riding crop.”

Newbies may be naïve enough to come to the cabaret and expect to sit quietly and watch, but the performers on stage don’t give a damn about such expectations. They didn’t come to sing or strip for you. They came to tease you, abuse you and outrage you. Take that away, and the whole affair turns into little more than background music for duck confit with walnut vinaigrette.

As for C.J., he’ll survive. It’s not like the man doesn’t know what he’s got himself into: read his definition of cabaret and you’ll see he’s got no grounds for complaint or litigation. Looking at some of these shots, I could swear my colleague doesn’t seem entirely put off by the experience. Just saying.