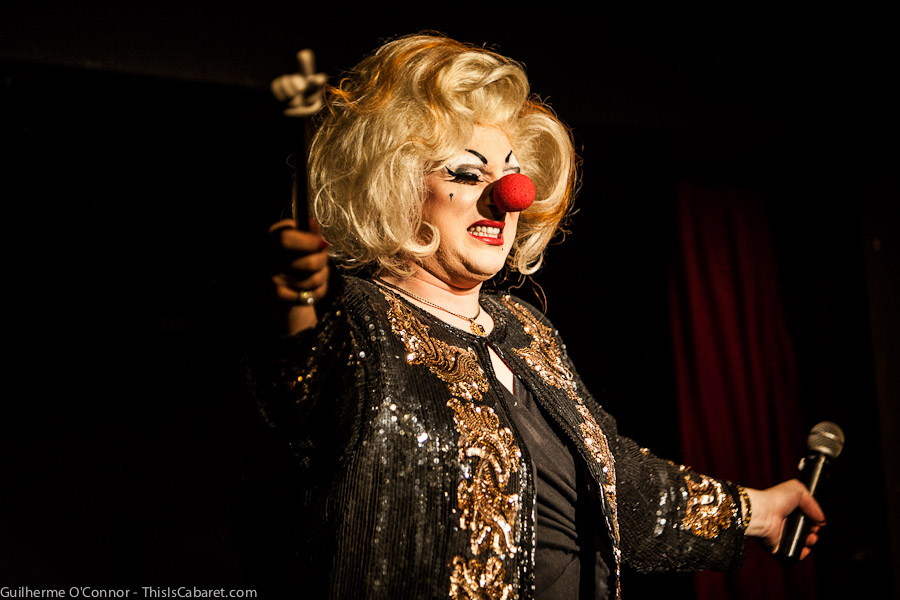 What are destitute cabaret artists to do when the recession hits and they need to make a quick buck? Regardless of what society may think, Myra DuBois is not afraid to resort to the unthinkable: children’s parties. This being Ms. DuBois, what follows is a string of half-baked magic tricks and callous sardonic sneers guaranteed to nip innocence in the bud and turn blossoming infants into full-fledged benefit claimants. Actually taking children to see Auntie Myra’s Fun Show might legally jeopardise a parent’s visitation rights, but for adults who’ve already lost their way, the drag queen’s sharp tongue yields a joyous revelry of grim cynicism.

Comically inappropriate stunts include a hand-chopping illusion and her already famous companion Edward, a ventriloquist dummy struck mute by an accident. A master of deadpan sneer, the Rotherham diva turns bitter apathy into facetious wit. More than the tricks themselves, the show’s substance is the disdainful attitude with which the performer attempts to entertain her hypothetical target audience. DuBois’s unflinching derisiveness permeates her entire act, from the careless handling of props to the overbearing manhandling of patrons.

A skit about an early show business outing in an amateur production of Oliver! is neither funny nor relevant in the overall theme. It sticks out as much as the drag queen’s earnest rendition of Part of Your World from The Little Mermaid, the only song in the programme. Between the two, a succession of quick tricks can get quite repetitive. Despite the uneven pace, though, the piece packs enough outrage to keep the laughs coming.

Myra DuBois’s stage persona is her most ingenious trick: no matter how jaded you are, she can out-jade you. Auntie Myra’s Fun Show is at times a cunning display of anti-magic, and at others a vicious invective against commercial entertainment for kids. At all times, it is a delectable hour of tasteless parody, suitable for adults of all ages – you don’t really think children buy all that crap, do you?