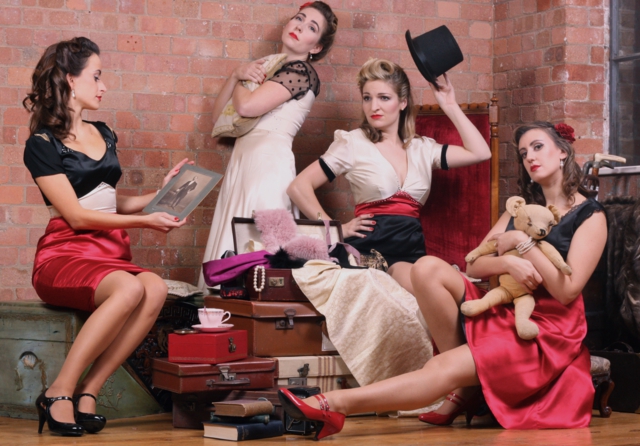 For the last few years, The Ruby Dolls have been the quintessential Weimarian close harmony troupe with a repertoire of Brechtian songs that are intimate and streaked with social commentary, humour and history.

The Ruby Dolls: intimate and intelligent music with a story.

The Dolls will be taking a new version of their Rubies In The Attic to the Edinburgh Festival Fringe, but not before some previews later next month. We caught up with them to ask about the personal stories behind some of their songs.

Noel Coward’s Any Little Fish has made it into the show to tell the love story of my quintessentially English grandmother, Pat and her second husband Mike.

Pat had a very dry sense of humour and loved Coward. He wrote the song in 1931, just as my grandmother was getting into the swing of London parties. Her cousins were setting up a theatre design school, Motley, and so she was sipping cocktails with John Gielgud as she came of age.

Any Little Fish is written in comic protest at the idea of being head over heels in love almost against your own wishes. Pat fell for my grandfather as a divorcee, thinking he was ‘steady, older chap’, and then was devastated to discover later that he was actually younger than her.

The traditional Israeli folk song Hashi Venu features in the story of my great great grandfather Chaim Dovid Sedlofsy. Chaim Dovid left his shtetl in White Russia in 1898 to start a new, better-paid life in Cape Town. He boarded a ship at Hamburg along with thousands of other Jews fleeing Eastern Europe but the journey did not quite go as planned. The ship docked in London and being an unworldly, uneducated man, he got off the ship early and that is how my family ended up in England!

Alone in a big new city, he gratefully found the Poor Jews’ Temporary Shelter on Leman Street and he ate a Sabbath meal with the other men there that night. They prayed together for their new lives and found solace in their faith and traditions. In our show the Jews sing “Hashivenu Adonai, elecha vena-shuvah; chadesh yamenu kekedem” from the Book of Lamentations which translates as “Turn thou us unto thee, O Lord, and we shall be turned; Renew our days as of old.” (Lam. 5:21).

I chose Bella Ciao to underscore the story of my southern Italian ancestors, because it’s a high energy popular Italian song, full of colour and life – as were they.

It’s a high energy section of the show which looks at three generations of Italian women in my family from 1898 to 1955. They probably would have sung this song in their communities throughout this period. Although synonymous with the anti-fascist movement in Italy during WWII, it’s origins are unknown and stretch back to the early 1900s. It has since become a bit of an international left-wing symbol and has been recorded in 25 different languages in many styles ranging from punk to folk.

I felt this was particularly appropriate to my socialist grandfather. Our very own Musical Director Ben Cox has created a unique 4-part harmony arrangement of this song for The Ruby Dolls in Tango time, which gives it our own vivacious, sexy twist.

My story is set in Apartheid South Africa, where my Grandmother Isabel grew up on the farm in the Transvaal.

Asikhatali is a Zulu freedom song. It came out of the Sharpeville incident in 1958 when unarmed protesters were shot dead by police and was sung by thousands of mourners at Steve Biko’s funeral in 1977. This song combines political lyrics with a joyful harmonies; it is symbolic to me of the complexity of South Africa and its metamorphosis into a democracy. It was shortly after the death of Biko that my family moved from South Africa to start a new life in London.

If you’re after entertainment with beats, beauty and Brecht, then it’s Ruby Dolls über alles. Rubies In The Attic can be seen in London at the Riverside Studios on July 25th and 26th, and at the Fringe at the Assembly Roxy between August 2nd and 27th. For more information, see www.therubydolls.com