Fringe Review: Rubies in the Attic 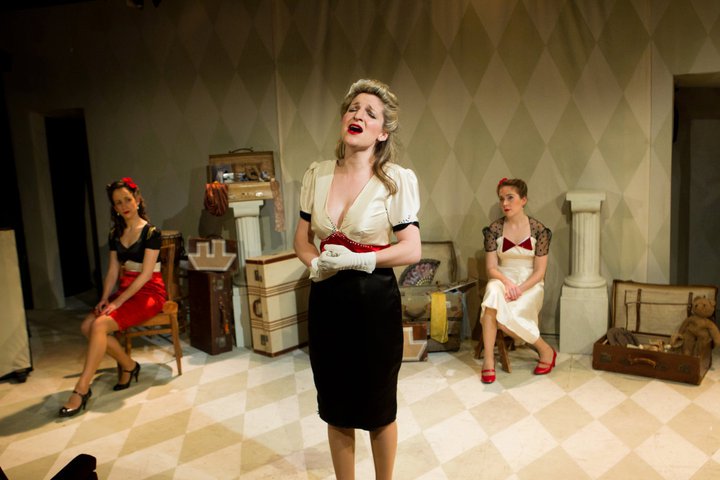 Clad in different styles of vintage wear, The Ruby Dolls immerse themselves in a century of history to tell the real-life stories of their immigrant great-greats. Adding drama, storytelling and puppetry to their palette, the close harmony quartet paints a picture of perseverance against poverty, prejudice and family separation with the vivid colours of their moving music.

Musical director Ben Cox backs the Dolls on piano as they assemble an elegantly cohesive programme out of an unlikely repertoire, comprising golden oldies, original compositions and traditional songs in different languages. Noël Coward tracks and show tunes like Don’t Rain on My Parade make a neat fit for the tone, while more modern fare like Look, Mummy, No Hands by Fascinating Aïda gains charming, toe-tapping arrangements.

The more exotic pieces are where The Ruby Dolls strike gold, though, both thematically and musically. Italian war chant Bella Ciao sways the crowd with a swift rhythm. Sung a cappella with the girls playing percussion on suitcases from the set, African folk song Shosholoza rings with pluck and poise.

The Ruby Dolls: moving, toe-tapping music with pluck and poise

In addition to singing and dancing, Rubies in the Attic deploys a range of props and theatrical gimmicks to tell their stories, including broomsticks that become men in different stages of hairlessness depending on which side is up. Their puppetry is particularly fetching, illustrating the arrival of a Belarusian Jew in an impoverished London East End through a faceless brown paper puppet operated bunraku-style by three of the performers. Other segments don’t fare as well: the use of both real and imaginary props is dramatically clumsy, and a routine where they improvise a grandfather from previously collected audience input results in a predictable list of disparate traits.

Likewise, their tales are bland and random, merely documenting the turning points of their ancestors’ biographies. Many plays (and films, and books) cling to the assumption that being true is enough to make a story interesting, compelling or entertaining, and Rubies in the Attic is one of them. It often feels like a song and dance revue, rather than theatre. If that’s what you’re in the mood for, there’s plenty of substance in the Dolls’ harmonies. Their endearing music lingers far longer than the genealogy homework.

The Dolls made quite an impression on Franco Milazzo, himself an immigrant descendant. Read his interview with the belles to find more insights about the personal stories behind their songs.