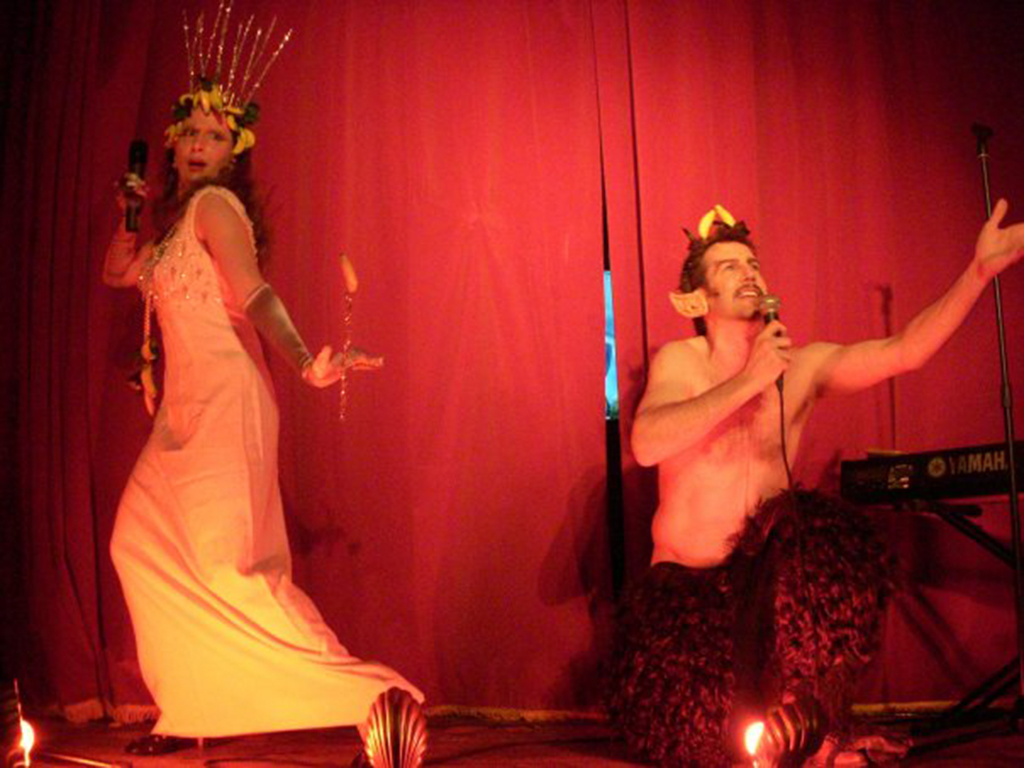 Something about The Voodoo Rooms seems to keep attracting good shows. Revisiting the premise of 2008 revue The Magic Faraway Travel Agency, London vaudevillians Dave the Bear, Claire Benjamin and Mister Meredith star in a riotous showcase of unapologetic goofiness. The Magic Faraway Cabaret frames an ever-changing constellation of guest talents in improvised mythical settings like “Banarnia” and “Popeye-dol”.

Their magic formula is simple: every night is hosted by a different member of the trio, with the other two contributing guest spots. In addition to teasing and stirring the audience, the three cabaret entertainers pool their efforts with admirable chemistry, bouncing off each other (literally too) and doing what they do best individually.

The boys are prone to singing striptease. Hirsute boylesquer Dave the Bear tackles show tunes and golden oldies with disarming over-the-top satire, while Mister Meredith favours original compositions of a more venomous disposition, which he often plays on the piano himself. Claire Benjamin, in turn, relies on a character comedy inventory of enviable range, launching into pop parodies like an Austen-esque take on Don’t Cha.

The date I saw was themed “Speakeasy Rider”. No choppers in sight (it’s a free show, buster), but plenty of burlesque to tickle the public in all the right places. Through an elaborate, multi-propped routine, Liverpool belle Velma von Bon Bon plays a shackled organ grinder monkey in a vigorous and spirited bump-and-grinding quest for freedom. Fellow Liverpudlian Diva Hollywood becomes a mermaid in The Pearl, an inventive act combining audience interaction, puppetry and a clear narrative into an elegantly paced pantomime. Upping the ante on the sexy side of the proceedings, sizzling bombshell Aurora Galore performs a volcano-hot fan dance brimming with the skilful go-go moves of her distinctive neo-burlesque style.

Rotating bills and compères are the norm in variety, but rarely does a show evidence such a clear personality despite so much mobility. You’ll catch widely diverse types like Joe Black, Ria Lina, Vicious Delicious and Jayde Adams on The Magic Faraway Cabaret stage, but you’ll always be firmly grounded on the deliciously deranged follies of the enchanted trio. Quite an enticing wilderness to lose your bearings in, especially this late in the evening.