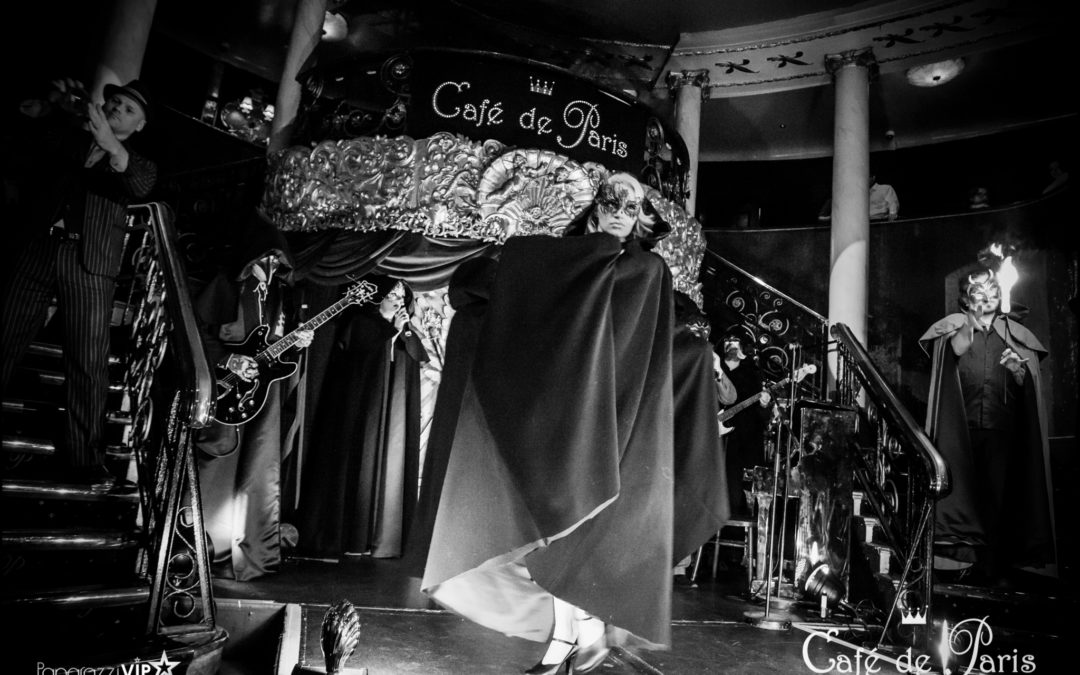 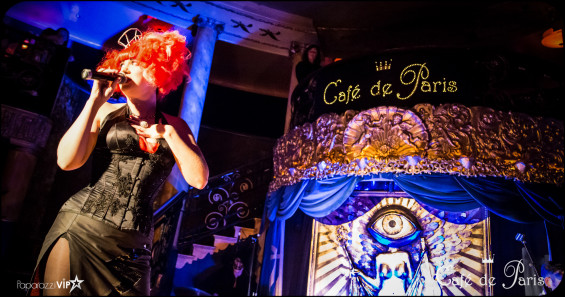 No secret handshakes required for this secret society, just a ticket and a broad mind.

They may be harder to get into than an old email account but secret societies are all the rage. Thankfully, there comes along one which doesn’t require you to be a billionaire or Salvador Dali to go to one of their parties.

Whether you want to call it cabaret noir or dark vaudeville, the London Cabaret Society at the Café de Paris joins a range of shows which seek to metaphorically eviscerate the human soul in the name of entertainment.While Its Your Funeral and the Double R Club siphon inspiration chiefly from death and the works of David Lynch respectively, Society takes us by the hand into a secret order where debauchery and devilment are the norm.

Another atmospheric touch is in-house band The Members. Performing under Halloween-type garb, their contributions are more treat than trick. Live musical accompaniment may not be a cheap option but, as productions as diverse as Platinum Lace’s Showcase and No Fit State Circus’ Bianco demonstrate, it is certainly something to be encouraged.

As frontmen go, there very few in London right now better than Benjamin Louche. Tempted away from his usual East London lair of the Bethnal Green Working Men’s Club, Louche looks and acts the part for this show perfectly. Whether he frequently communes with the devil over a cup of Earl Grey and crumpet or offers infant sacrifices every other Tuesday is unknown; the important thing here is that no-one would blink twice if told that he did. On this occasion, though, his normally caustic patter lacks bite with too much of it relying on so-so observational humour or repeating the japes circulating that morning on social media. His delivery remains supremely confident throughout but would be served better in this setting with more edgy material. [NB: Louche shares hosting duties with equally brilliant Desmond O’Connor.]

Louche aside, the undoubted king of this particular jungle is circus veteran Chrisalys. His two acts Pig From Hell and Dolly Mixtures are classic examples of his particular brand of theatrical cabaret, namely monstrous mimes stoked with imaginative depravity and a twisted narrative. What could be seen as grotesque parlour tricks in a lesser performer’s repertoire are strung into two singular narratives exploring, appropriately enough for a supperclub audience, food and play. Both routines help this outsize character lay claim to being one of the most complete vaudevillians around, even though what he does is very rarely routine.

Anna The Hulagan and Stewart Pemberton too offered nuanced and spectacular acts. The former progresses from an all-swinging, all-dancing hoop-girl turn through to a foot-stomping fire-blazing finale and  Pemberton turns on the style by combining some damn fine juggling with some sweet tap-dancing steps. Neither extends the night’s overall theme too much but are worth catching for the jaw-dropping craft alone.

Miss Frisky (she of Frisky and Mannish fame, don’t you know) is the very definition of a lightbulb act. When she’s on stage and singing, the Café lights up like the fifth of November, but the second that she steps down mid-song to delve into the crowd, the effect is utterly lost and the general attention wanders as we try to spot her at ground level, order a drink or check Facebook. Again.

Utterly bristling with imagination, this show is a step up from its Café predecessors in two key regards. La Reve, Black Cat Cabaret, the Wam Bam Club and the new kid on the block Showtime all made good use of the Café’s geography including its iconic double staircase and balcony but the Society goes a step further by bringing into play the bar area and sending performers into the audience more often.

The second difference is the soirée’s intriguing concept. While La Reve and Black Cat Cabaret attempted to bring Monmartre to Piccadilly and Wam Bam painted itself the godmother of all burlesque fests, there is something very different about being in a secret society. In a similar fashion to the mock-speakeasies which are two-a-penny around Soho and beyond, Society‘s core conceit taps into the very human desire to be transgressing while congressing or, to put it another way, feeling naughty while in the company of the like-minded. Who the hell wouldn’t want to be part of this literally underground secret society? As this theme is not bound to the Prohibition era and outdated laws, it has much more scope for expansion and we look forward to seeing where the Café takes it. For those looking for a walk on the wild side, this night comes heartily recommended.