Lap This Up: Platinum Lace’s Showcase 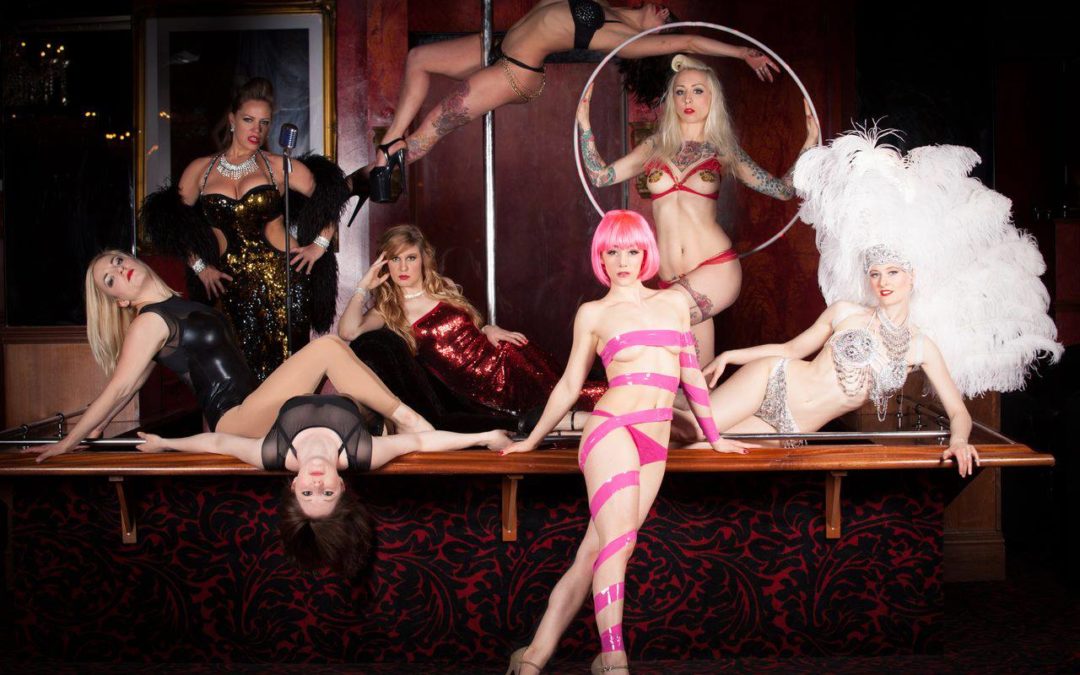 A lap dancing club is a surprise venue to catch one of the most thrilling forms of cabaret. 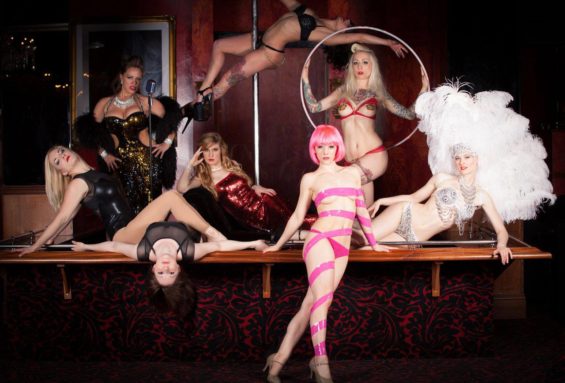 Veronica Blacklace (second left) with some of Showcase’s revolving cast of performers.

Lap dancing clubs are for sleazeballs and girls of negotiable affections, right? The general consensus amongst the chattering classes is that lapdancing venues demean women – the same accusation being currently levelled at burlesque. More pointedly, a 2003 study suggested that “the number of rapes increased by 50% and indecent assaults by 57% in the London borough of Camden after four lap dancing venues opened.”

Then again, Dr Brooke Magnanti (aka ex-call girl Belle du Jour) analysed that report and suggested that not only was it as accurate as a drunken archer but, like a new-in-town traffic cop, actually pointed the wrong way: in the decade since lap dancing became legal Camden has seen fewer recorded rapes than other comparable boroughs of London, even those with fewer strip clubs or none.

And as for lap dancing being socially unacceptable, let’s ask the opinion of Nigel Farage, top dog at UKIP and potential kingmaker whose party in a recent opinion poll are running third just behind the Conservatives. He certainly doesn’t mind bragging to the media about about his visits to lapdancing clubs (plural), going so far as to say “(I) thought bloody hell, this is really good.”

All that aside, why is a respectable cabaret critic found sitting on his lonesome inside an apparent den of iniquity past midnight? A good question with a great answer: Veronica Blacklace and her latest creation Showcase. With her troupe La Bordello Boheme, she wowed us last year during her residency at ex-cabaret joint the Brickhouse. The compere and singer led from the front with a floor-melting performance that set many a pulse quickening.

Bordello had a number of key attributes which Blacklace has brought forward to her new venture at Platinum Lace. In both cases, she has constructed a thrilling show utilising a bare bones bill of multi-talented individuals with the emphasis on unashamedly sexy feats of circus skills soundtracked by her live renditions of pumping pop/rock.

Showcase‘s overall structure is similar to that of Soho neighbour The Box with a series of short, punchy acts spread across the early morning. The Showcase title itself refers to a number of themed shows which are changed weekly. A typical act sees Blacklace singing and cavorting while her two colleagues display outstanding physical ability and showmanship across different apparatus. Sasha Flexy shows superlative skill on a pole which is barely used by the venue’s lap dancers, weaving up and around it with grace, power and speed, while co-performer Chi Chi Revolver is no-one’s idea of chopped liver. The Guinness World Record-holding hoop queen is stunning and statuesque, a tornado of tattoos and hair who is sheer circus from toes to crown.

The combination of live song with eye candy action is a daring and successful one. During the act, there’s a sense of being in the midst of a music video; later the cumulative result feels like the double whammy of a classic Bond opening credits scene with the likes of Shirley Bassey blasting out some epic number as naked silhouettes get up to some seriously suggestive behaviour.

As well as her vocal contribution, evidence of Blacklace’s consummate power as a producer is streaked through Showcase like the lettering in Brighton rock. She has chosen her cast carefully, she makes intelligent and pragmatic use of the venue’s furniture – including, at one point, the surface of the main bar – and the net effect is far greater than the sum of Showcase‘s exquisite parts.

Moreover, there’s a salient lesson for many other cabaret shows here. In essence, by mashing live music with circus performance, Showcase pushes the boundaries of modern variety into a direction which, while not being entirely new, is one that we look forward to Blacklace exploring on a larger scale in a more performance-friendly environment. Cabaret may have grown more agile and diverse in the age of the backing track, but the chemistry that Showcase establishes with the crowd is an irreplaceable treat.

Showcase features a number of different productions which change each week. Please check the official site for the latest information.