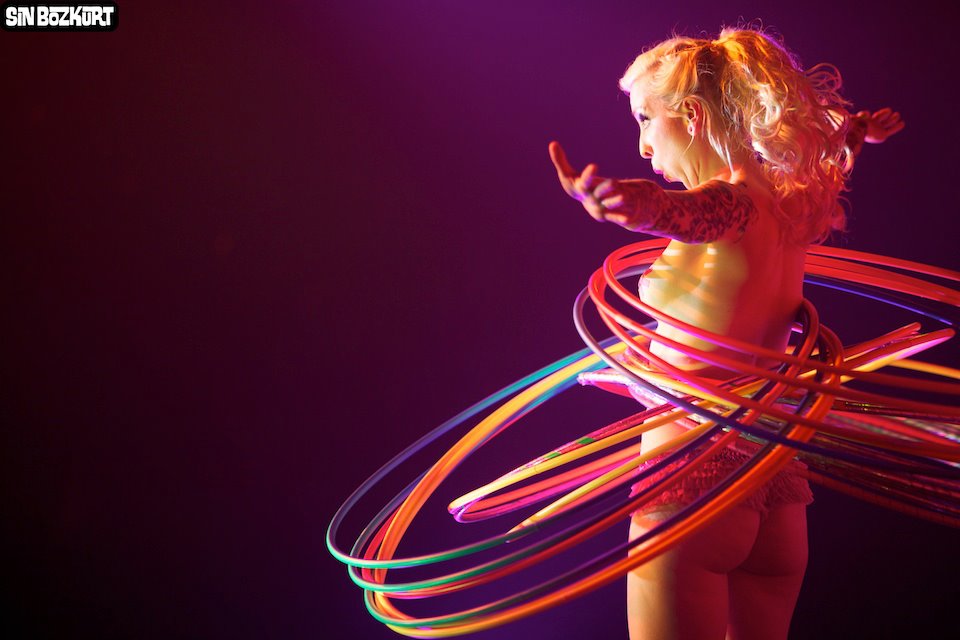 The origins of travelling vaudeville troupes lie in improved transport links between cities. In the mid-19th century, new railroads meant posses of vaudevillians could play in New York one week and Chicago the next. These days, marquee productions like La Soirée and Cirque du Soleil trot the globe on a constant basis.

The Brickhouse has made a name for itself in recent years as a destination for out-of-town troupes keen to impress a London audience. Boylesque brigade Mod Carousel and burlesque dolls Sinner Saint Burlesque have both travelled 6,000 miles from Seattle to Brick Lane to put on productions this year. La Bordello Boheme have only travelled from Brighton but are a still a welcome change from much of the current London fare.

As a troupe, we’ve rarely seen one smaller than this quartet but, as we found out (again), size isn’t everything. Take, for example, the captain of this merry crew. Veronica Blacklace may well be one of the most brazenly brilliant singer/compères to ascend a London stage.  A corseted combination of Jessica Rabbit and Dusty Limits, she expertly leads her merry band from the front. And how.

While some hosts barely move from the stage, Blacklace treats the entire lower two floors of the venue as her personal space: she gives (fully clothed) lapdances, takes from the audience glasses of both varieties (drinking wine from one, trying the other type on for size) and wipes one diner’s face with his own napkin. On one of her many walkabouts, she spots a waiter cleaning a nearby spillage. Leaning over, she tells him “and while you’re down there…” Blacklace exudes charisma and calor throughout the night, enough to be forgiven her occasional choice of overused standards like Feelin’ Good.

As for the other three members of La Bordello Boheme‘s cast, it’s all killer, no filler. Burlesquer Billie Rae shows admirable levels of dynamism and bravado, especially in her second act. Appearing onstage with an elaborate outfit featuring Isis wings and a huge feather fan headdress, she takes time to draw the audience in before suddenly stripping down to tassels and merkin. Most burlesque performers would scarper offstage right about then; instead, Rae casually proceeds to demonstrate some elegant fire-eating to the obvious enjoyment of the crowd.

This isn’t to say there is nothing for the ladies to swoon over. Edd Muir starts with an unusual Indiana-Jones-style bullwhip act.  The loud practiced cracks temporarily silence the rowdy office outing on the mezzanine floor as he uses the whip to dismember newspaper sheets and a rose held between Blacklace’s barely quivering lips. His second appearance draws more than a few sighs as he strips off to show a mean set of abs and ascends a Chinese pole demonstrating the kind of skill reminiscent of La Soirée’s Hamish McCann.

Dancing within a lit-up hula hoop while stripping is nothing new but it makes for a visually spectacular experience as World Burlesque Games’ Triple Crown winner Anna The Hulagan demonstrated this year. Chi Chi Revolver has the edge on Anna in one respect, though: the former has priceless facial expressions not dissimilar to a toddler tasting chocolate ice-cream for the first time.