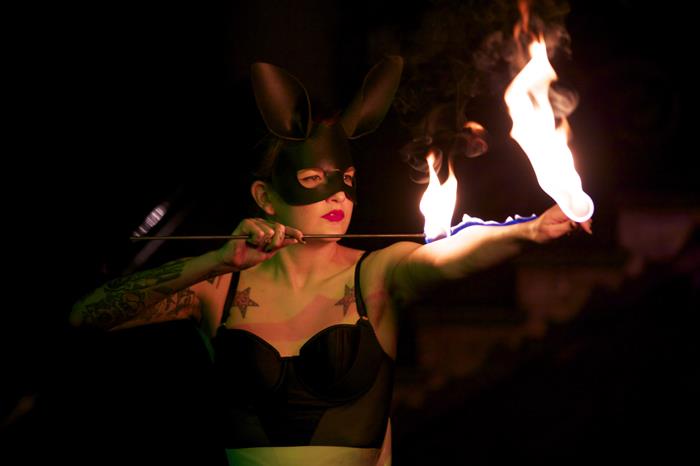 Let’s get the party started: this new Saturday show is a brilliant, high-flying addition to the London cabaret skyline. 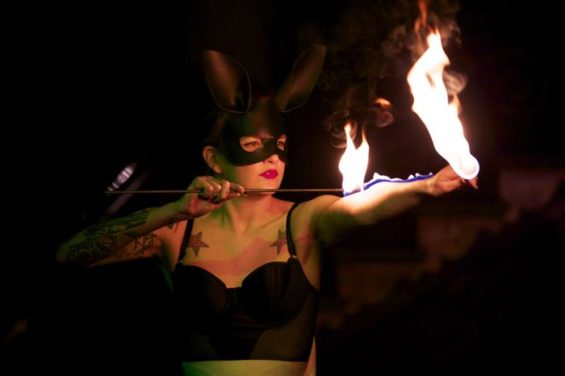 The Cafe de Paris’ Showtime is the successor to the Wam Bam Club. Photo by Lisa Thomson.

The Amazing Ari certainly lives up to his name. Photo by Lisa Thomson.

When Café de Paris waved goodbye to its long-term Saturday night resident show the Wam Bam Club late last year, it set about creating a new show to fill the gap. As Francois Hollande is finding out, swapping dance partners in the public glare is no easy thing and Wam Bam was a much-loved West End institution as well as a gloriously OTT glittergasm of a supperclub that pulled in the party crowds.

Its successor Showtime therefore has much to live up to. Sure, it still retains the benefit of being in the most glamourous of London’s cabaret joints. The sumptuous underground ambience of the Café de Paris was modelled after the RMS Titanic’s ballroom and, after a period spent on the other side of the room, the stage is now back in its original location between the venue’s iconic pair of langurous staircases. Neither is the lipsmackingly-good food to be sniffed at with classic gourmet choices like foie de gras and seabass on the menu.

Other Cafe fixtures bookend the Showtime experience. Laura London, the flame-haired close-up magician with the husky voice and quick hands floats from table to table before the fun gets started and later there’s the wild dance party that takes places in the velvetine hinterland of the venue.

So, apart from the title, what’s changed? We’re glad you asked. The alterations are both dramatic and subtle. Gone is the all-female front pairing of compere Lady Alex and her sidekick Bunny Galore and in their place are a couple of very different faces, albeit never at the same time. Stand-up comedian Jeff Leach and singer-cum-impresario Paul L Martin will be sharing the microphone over the coming weeks and offer two remarkably diverse approaches.

Martin is nothing less than cabaret royalty. He has performed all over London in his solo show, has started up his own talent agency and produces the annual London Cabaret Awards. We look forward to catching his more bawdy musical take on the MC mantle but press night saw Leach as the frontman of Showtime and what a revelation he was.

Comics often find it difficult to cross into cabaret, a more interactive world which demands that they do more than is standard practice for their ilk, namely hide behind a mike stand and prattle off well-worn trivialities. That might be what comedy club crowds look for but cabaret audiences have far higher expectations. Thankfully, Leach has a familiar-to-invasive style verging on the aggressive and sees him strong-arming his way into the audience’s affections. He takes no prisoners as he moves among the diners, blending his rehearsed shtick with improvised inquisitions. At the point where the average comedy audience would be heading for the door or calling the police, the Café de Paris host was being cheered on to greater heights. Did he go too far? Maybe, on occasion, but cabaret is often about knowing where the accepted boundaries of “good taste” are as they disappear in the rear view mirror.

The casting too demonstrates a new mindset in comparison to Wam Bam. Gone is their blunt emphasis on burlesque which saw a number of separate turns from Lady Alex and guests plus the two in-house crews, the Buff Boys and the Wam Bam Belles. That’s not to say Showtime is short on strippers. Far from it.

In place of the Boys and Belles is one of the capital’s favourite troupes. The Folly Mixtures already have a regular Wednesday spot at Madame Jojo’s and they will now hold another weekly session at Showtime. They introduce both halves of the show contributing trademark group routines replete with sass and confidence plus a solo fan dance which blends arse-jiggling bravura and delicious tease in equal measure.

The showgirl fun is not limited to the Follies with Millie Dollar and Dolores Delight adding variety to the lineup. Dollar’s fire routine to the sound of Jefferson Airplane classic White Rabbit is a proficient exercise but does little to engage the heart or the mind; in deep contrast, Delight is a witty jazz diva who works the audience with consummate skill. As well as interjecting japes between lyrics, she straddles lucky diners and fills the historic ballroom with her lascivious vocals.

Proving that this soiree is more than just a glamour parade, Showtime also includes musical comedy, circus and a quirky act or two. Christian Reilly is the troubadour never short of a double entendre or two when it comes to dragging the works of wellknown artistes into the gutter. Cher’s Believe becomes a tribute to KY Jelly while Dolly Parton’s 9-5 is turned into a papal anthem extolling paedophilia. The targets are tried and tested but Reilly demonstrates exemplary comic timing and and his wonderful wordplay drives home some solid gold jibes. A well-endowed hunk in a sailor’s outfit, Duncan Donut is every lady’s dream guy – or is he? This particular routine brought down the house at last year’s Texas Burlesque Festival and walked away with the award for The Best Original Act. We won’t say more but those eager for spoilers should look over here to see just whether this officer really is a gentleman.

Circus has elevated variety to new heights in recent years and the Amazing Ari takes this show up yet another level with an amazing silks routine. His acrobatic aerial twists and turns are both fluent and, at times, outrageous. Watching his mid-air splits above the Café de Paris stage is an invigorating sight and a literal high point of the evening. The grand finale routine from Feeding The Fish, a curiously-named pair of hoopers, is an eye-popping LED-powered light show. Called Flux, there is more gimmickry than physical skill involved here but the effect is undeniably astounding.

Showtime may be a brand new offering but it is no scratch night. Those who are looking for a wall-to-wall burlesque blowout are advised to look elsewhere. The showgirl quotient here is high but, to its credit, goes beyond stripping to include singing, circus and magic. The production values are also high from set design through to the calibre of the acts. Its still early days but, with its carefully-crafted concoction of burlesque, circus and comedy, we can see Showtime rapidly becoming a Saturday West End institution.