In Pictures: The Black Cat Cabaret 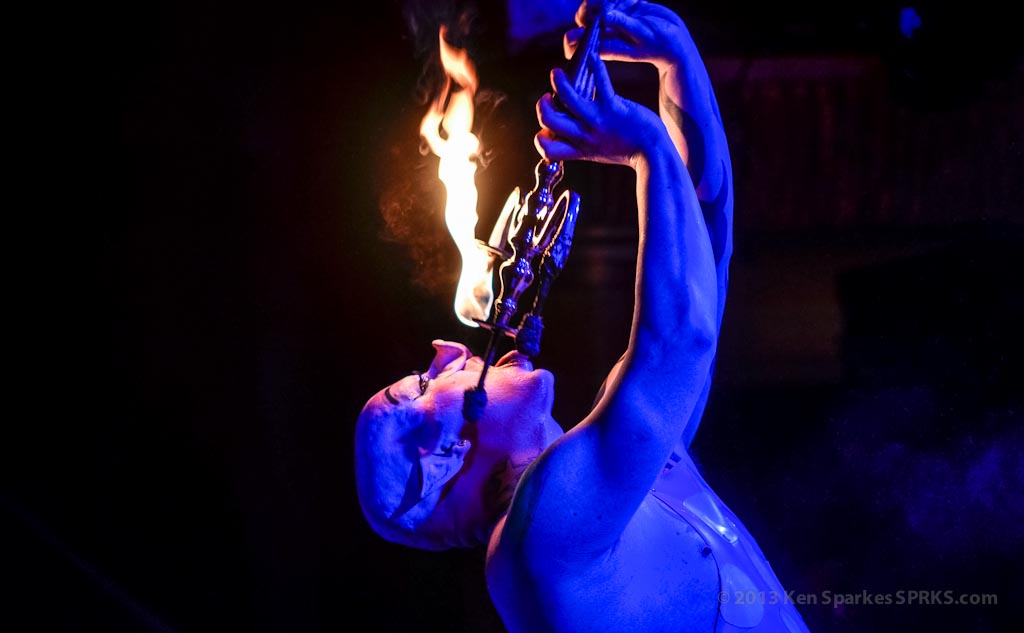 While the epic Boom Boom Club is on hiatus, their spot at the Café de Paris is taken by new production The Black Cat Cabaret featuring some members of the Club both on and off stage. Last Friday saw the final show for the Black Cat’s opening cast and I was there to see them off.

The fluted columns and crushed velvet of the Café de Paris evoke the days of Marlene Dietrich, Anna May Wong and Noel Coward, a great venue for the The Black Cat Cabaret. Front man Dusty Limits, in Montmartre mode, does his irrepressible best as “maître des cérémonies” for a slightly naughty but mainly affable lineup of acts. I particularly enjoyed Katherine Arnold‘s slick aerial act and a popping reverse striptease by Laurie Hagen.

The show won’t surprise any cabaret aficionados but the restaurant was full and everyone I spoke to was having a swell time. Whether any of the diners – some paying up to £75 for three courses – noticed the reflected irony of Chrisalys, Pig From Hell, as he downed the contents of a wine bottle in one go and stuffed food into his face is unknown. Overall, this is a plush West End, boozy, supper cabaret and, on that score, it works very well.

The Café de Paris’ ballroom is based on that of the Titanic.

As the show’s MC and co-director, Dusty Limits wears more than one hat here.

Audience interaction is a key element of many cabaret shows.

The Black Cat Cabaret continues with a new cast from this week.

Aerialist and firebreather Chrisalys performed his Pig From Hell act.

As he downed the contents of a bottle of wine and stuffed his face with food, quite what the diners thought of him is unknown.

One of the core members of the Boom Boom Club, she has performed her spectacular acts all over London.

Vicky Butterfly is another co-director of the show.

Laurie Hagen has a performing her reverse striptease act.

Hailing from Belgium, she has been a stalwart of the London scene for the last few years.

The Black Cat Cabaret continues at the Cafe de Paris. Please see the website for details.

The Black Cat Cabaret is a supperclub in the heart of London’s West End.

More information on The Black Cat Cabaret can be found on their official website.

Photo credit: Ken Sparkes, exclusively for This Is Cabaret