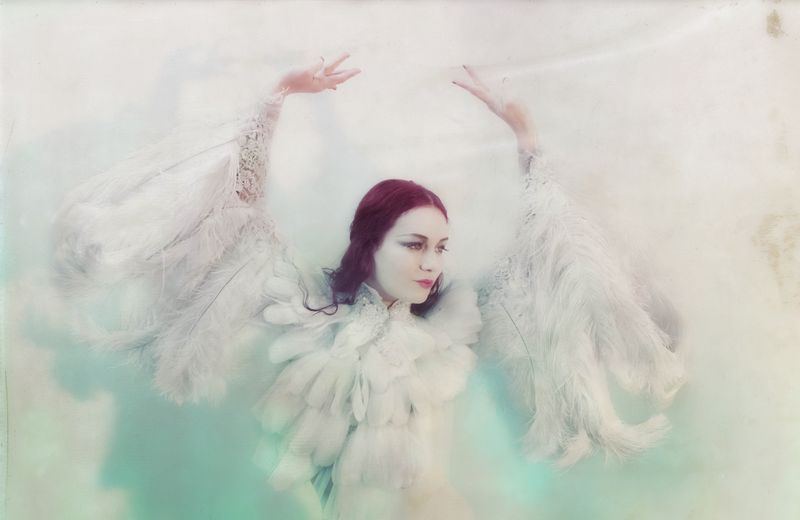 The Boom Boom Club have had an exciting year. Following their three shows under Waterloo station putting on their well-received brand of neo-cabaret in the Old Vic Tunnels, they appeared overground at one of the high altars of entertainment that is the Royal Albert Hall. This summer, they will embark on their biggest adventure yet: bringing to life Prospero’s Tavern, a Tempest-themed variety night of Shakespearean scale at the London Wonderground.

Co-founder Vicky Butterfly has had a dual role in the rapid growth of the Club, acting both as a key performer and a set designer. She talked to us about the ideas behind their latest extravaganza.

How did you get involved with Prospero’s Tavern?

I’ve been involved with Boom Boom from the start – I used to curate the first shows back when we were ‘Vicky Butterfly and Bioux’s Non-Stop Electric Cabaret’ at the Proud Gallery as part of the ‘Be’ club nights: so when we decided to forge our own path as Boom Boom, as well as working on ideas together, we thought it was important to work to our strengths in different backgrounds: in my case that was theatrical concept and design.

I provided the initial set of the Victorian theatre for the show at The Bathhouse and as we progressed to The Old Vic Tunnels it became clear that the space needed over-arching concept ideas and design to create a dynamic between and unite the separate performance spaces (and happily the others agreed!) so we could engage in more ambitious concepts such as Voudoun ritual versus bogus evangelism with a natural ‘pagan’ space in between. We had such a wonderful opportunity to have fun with the framework for the show(s) that when we were offered the chance to do the Wonderground show we wanted the chance to build on that and do something different from the more classic variety format we already have at La Reve.

This isn’t the first show you’ve been involved with as a designer but it’s probably the biggest. Do you see yourself evolving towards more of a backstage role in the next ten years or will you still be performing?

I’ve been involved in theatre and film design for over ten years now and the initial impetus to become more involved in performance and cabaret was a mixture of opportunity and a desire to work on a particular scale. When I trained, it was clear that opportunities for original design were decreasing due to franchised musicals, saturation and cuts in the arts. A number of the big costume houses I worked for closed or downsized and I’m very passionate about attention to detail and how design is used is as important to me as what it looks like.

I worked on a lot of major films, designed productions for theatres such as the Soho Theatre etc., but it didn’t really click for me. I much preferred working as an assistant to Zoe Lloyd, who at the time was doing graphics and couture level costumes for the Whoopee Club and Marisa Carnesky’s Ghost Train.  It was a more organic fusion of performer and design and on a far more intimate scale. So I don’t think I will stop performing, although what I do may evolve and change. My design for myself is very much an expression of myself that is specifically related to my performances and ideas that can’t be satisfied by interpreting someone else’s ideas or telling someone else what to do.

How did you get into set design? Who are your inspirations?

I transferred to performance design from fashion at Central Saint Martins because it didn’t feel like my world. It felt very practical and hyped up and I didn’t feel I could ever be commercial. But I didn’t feel completely at home on the performance design course either. I think when it came down to it, neither were close enough to what I actually wanted to do: as well as performance, I was mostly interested in costume as fine art piece and live art. Many of the friends I studied with went on to work with Punchdrunk and Shunt: I really admire their work and anything that makes art and theatre really come alive! It’s the same thing that really draws me to cabaret and performance art. So I’d say they’re definitely my inspirations, in addition to anyone really immersed in all aspects of creating a world: David Lynch, Victoria Chaplin, Marisa Carnesky, Maya Deren, Luisa Casati, Erte, Christopher Hobbs and Odile Dicks-Mireaux. 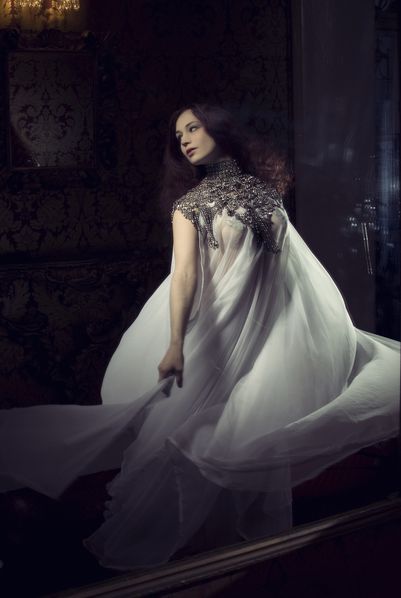 The moon came together a piece at a time: initially I was inspired visually by Mucha, the popular paper moons of the Victorian era and the old Ziegfeld Follies set-pieces.but I wanted it to be dynamic and create a unique type of movement as a speciality act. I knew I wanted to make it appear as if I was suspended weightlessly in space and it just came together. I’m still developing it aesthetically: the updated version should be finished later this summer.

I have injured myself on it in the past: although I’m confident that my design is completely safe, the first run we did in the Tunnels had me performing it for long stretches of time and the wear and tear on the body was quite painful!

What was your take on the Alex Proud e-mail and the comments that followed?

I think in the renaissance of an industry that’s still finding its feet as far as structure is concerned, clarity is always a good thing when people are still finding their feet. These are often the things that performers discuss amongst themselves and up till now we haven’t had a centred free press in our arena to express these things where useful. I think every step taken in this area is a beneficial one. I don’t want to go into its contents here especially: that’s been hashed out over and over but my tuppenceworth is that it might not be ethical to demand exclusivity, but it is up to an individual self-employed performer what terms they want wish to work under. There has always been one producer, booker, employer or agency who will not work with anyone who works or has worked for another specific one.

The thing that really stood out for me was the pent-up level of anger and vindictiveness some people unleashed once there was a forum to express it anonymously once blood was smelt in the water and I’m not sure the taste of that has really been washed away by the back-pedalling that resulted from the exposure and solidarity shown. Maybe this is the price of openness and clarity.

What would you do if you found someone plagiarising one of your acts like Piff did?

I think for me, the situation is generally different from Piff’s: as I do not produce my own written content or create copyrightable tricks of my own, the concept of plagiarism is less quantifiable for me. Dance and performance without speech are almost impossible to police. But I have had costumes, ungeneric concepts and visual images copied. I generally look at it as a three strikes thing. For instance, if the costume has been copied in addition to the theme, a trick (like a bra full of butterflies that fly away), the manner of creating the visual (eg. how I made my snowglobe) and the spirit, I think it’s ok to assume that it’s no coincidence.

I was given the advice that was most helpful for me when I worked for a small fashion line when I was about 15. They let me design some pieces which were copied by another brand and when I was upset, the head of the company I worked for told me that the people who have ideas can think of new ones all the time and people who steal will always have to steal and will eventually get found out. I try to use moments like that as inspiration to improve my work, not hold on to the feeling of injustice. In the meantime, I don’t know how much satisfaction a true performer can get from performing plagiarised material.

But I suppose that changes when it starts to impact your business rather than creative life: if someone else replicated my entire moon show and was making a bomb doing it? Yes, I would take measures to stop them as that’s a design I own uniquely.

Is burlesque heading in the right direction?

Are we able to say what the right or wrong direction is?! Surely half the fun of the modern performance world, in any genre, is that we are able to make our own personal right direction. It would be no fun to watch if everyone was heading down the same road! I suppose my preferred direction is the freedom to perform without feeling you have to be within a certain ‘box’.

What’s your take on pants vs merkins? We’re seeing more and more girls use the latter. Is it a case of personal taste or something driven by the audience?

I have no personal opinion – I like details that are authentic to the integrity and/or era of the act but also aesthetic ones: most costuming isn’t 100% historically accurate (if it was, can-cans would be performed with split crotch drawers and no pants!) so if the line looks better without pants, I say no pants. Within the law of the location, performers should be free to do what they’re comfortable with and what suits the look and meaning of the show. I think in general audiences aren’t that fussed if it’s a good performance. I’m also a fan of ornate body suits.

Do cabaret artistes need their own union or are they better off working within Equity?

Equity is a wonderful protection and insurance for all performing artists: I think the only place we’re not helped is by the minimum wage, as variety tends to be engaged under different terms and for different periods so it doesn’t really apply.

Want to grab a pint in the boozer at the end of the world? Boom Boom Club: Prospero’s Tavern plays at the Priceless London Wonderground spiegeltent on June 16th and 30th; July 13th, 19th, 28th-31st and August 1st-4th. See boomboomclub.co.uk for tickets and details.