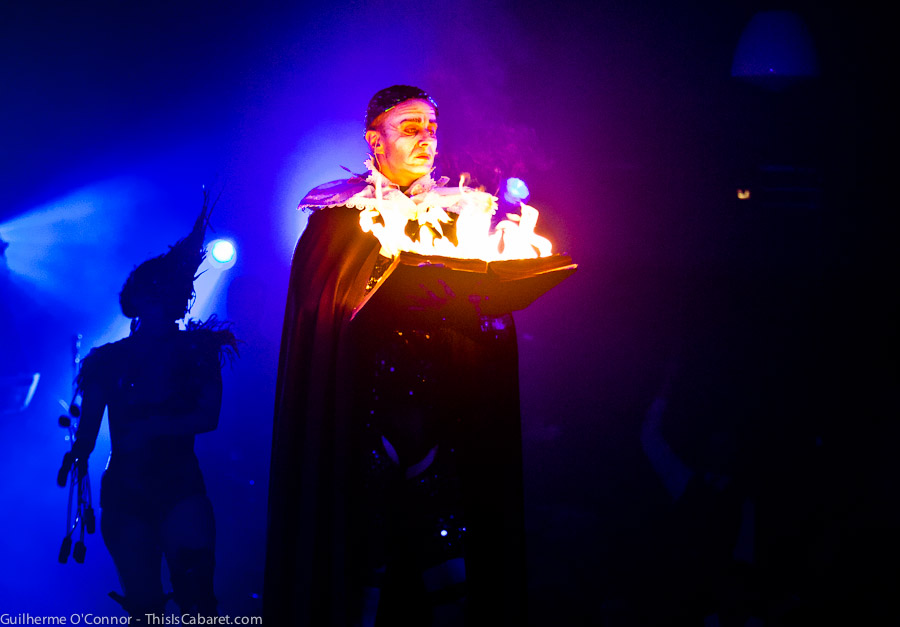 Every new season of Boom Boom Club is a milestone in British cabaret. Since it abandoned a weekly format in 2011 to reinvent itself as a franchise of self-contained performance events, the seminal variety show has experimented with the genre in unusual venues like the Old Vic Tunnels and the Royal Albert Hall. Prospero’s Tavern, its newest incarnation, incorporates live musical accompaniment and a plot of sorts into its concept, which frames the impressive roster of top-notch cabaret, burlesque and circus talent that the Club is known for.

Written by usual host Dusty Limits as a parody of Shakespeare’s The Tempest, the show assumes the guise of entertainments hosted by Prospero at the pub in his uncharted island, featuring a line-up of stranded shipwrecked artists. References to the play are limited to Prospero’s stage banter and a few performers cast as key characters, including aerialist Katharine Arnold as Ariel (serving as the pub’s janitor) and contortionist Lucky Franco as a drunken Miranda.

The greatest strength of the show lies in its live soundtrack, performed by London rock band Uberkaboom, a combo of double bass, electric guitar, drums and saxophone. Accompanying the vast majority of acts as an ensemble or individually, they reinforce the intimate pub atmosphere and add extra punch to the many segments, as in Ariel’s aerial number, performed against a mesmerising live rendition of Feelin’ Good with Sarah-Louise Young (of Cabaret Whore and Fascinating Aïda fame) on vocals. The band also performs at the event’s after-parties, on selected dates. 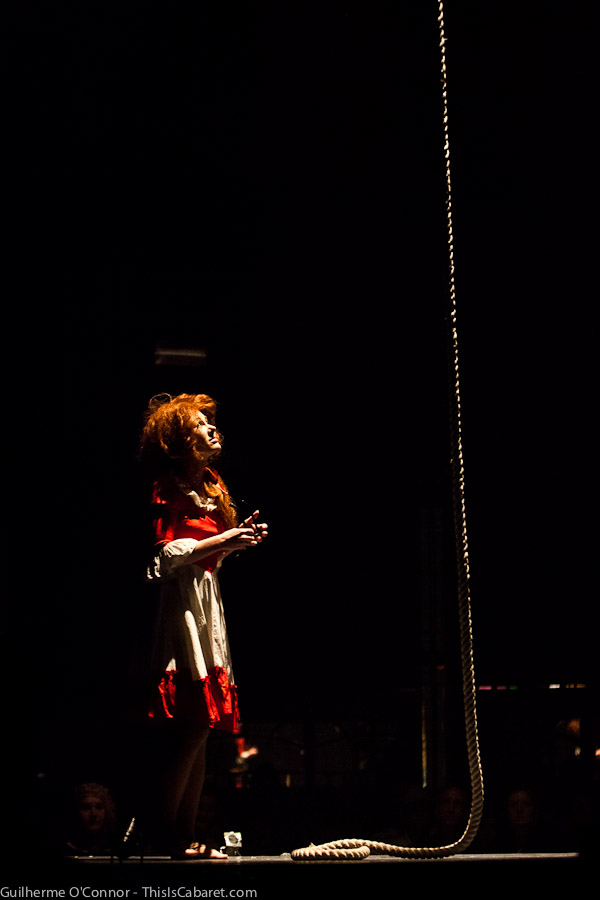 Most of the line-up changes for every engagement, but you can expect it to include some of the most established artists in UK variety. Playing a pair of squabbling sailors, So and So Circus launches into dramatic stunts of jaw-dropping technique and enthralling physical comedy. Kitty Bang Bang stars as Prospero’s cat in a torrid burlesque routine bristling with defiant sensuality. The famous hand dance number by Up and Over It gains a Titanic makeover that culminates in a spellbinding dance-off, in which Suzanne Cleary tap-dances en pointe. The backing track that accompanies it, however, is not only dissonant with the rest of the show, but distracts from the skit’s rich percussion.

Adding a plot to a variety show is an ambitious move, but in the case of Prospero’s Tavern it remains tentative and underwhelming. The title character magically commands his island like a god, with no counterpoint to bring about any conflict or dramatic tension (no Caliban in sight, incidentally). Only Ariel, a marginal and silent slave character, undergoes any change at all – and even then it is out of its master’s benevolence.

Overburdened with farcical theatricality, drag compère Jonny Woo’s turn as Prospero grows monotonous by the third act. Essentially a pantomime villain, he keeps the poisonous attitude cranked up to eleven, becoming repetitive in tone, diction and volume. Even his many costumes begin to look familiar after a while.

A largely unchanging lighting scheme, and a bare stage, with little more than a few barrels for a set, extend the frame narrative’s lack of spectacle to its production values. A curious result is that the 75-minute show feels short and uneventful as a revue, despite a 13-act bill. The lack of an interval is another questionable experiment: early on the show, Prospero announces that patrons are free to help themselves to the bar during the performance as they please. Most just remain seated until the end.

It’s easy to forget the magical tavern shtick and focus solely on the high-calibre vaudevillians following each other in quick succession. This being the Boom Boom Club, though, “high calibre” is an understatement of the evening’s delightful attractions.