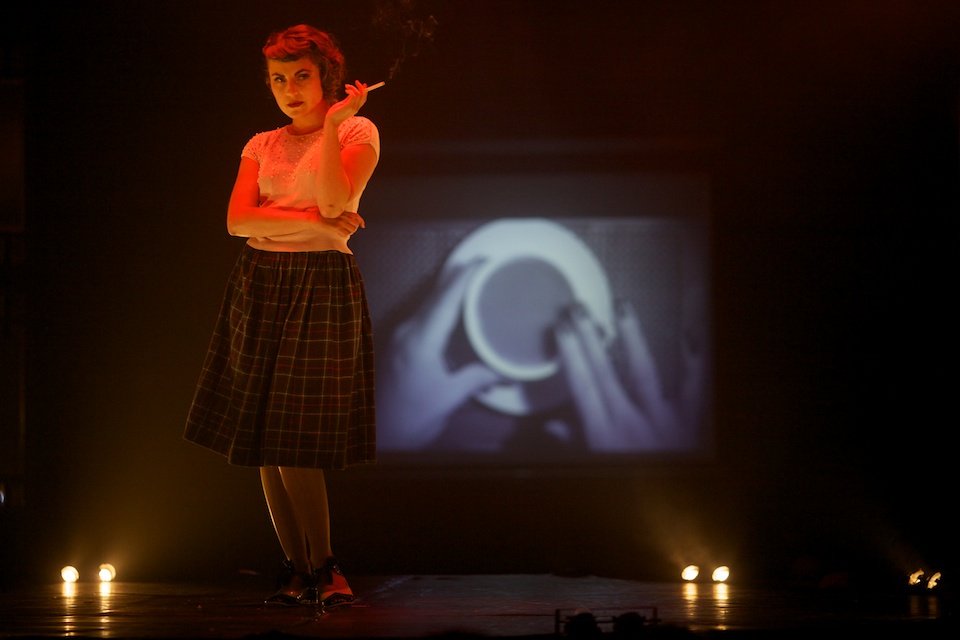 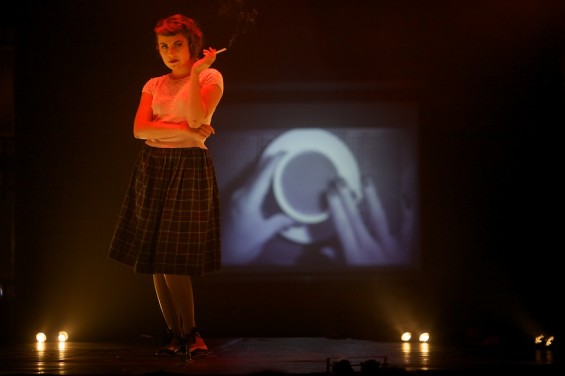 The Double R Club’s aptly-named Summer of Unease mini-tour came to a spectacular finish on Friday at the London Wonderground’s Spiegeltent. And what a night it was. All the Double R’s habitual scene-unsettling was evident in full measure, and familiarity does nothing to diminish its effectiveness. The dim red lighting, the magnificently creepy soundtrack – half horror movie, half striplight hum – often lifted straight from Lynch’s work, even the unexplained and potentially unintentional rippling of the curtains, combined to provide a thoroughly sinister atmosphere even before the aberrant Benjamin Louche appears with his (in)appropriately lipsynched version of Love Letters. On splendid form, our deviant host offers us a customarily offbeat combination of metaphysical reflection, filthy anecdote, and arch intellect before unleashing a couple of sets which retain the Double R’s signature discomfort in full measure.

Not necessarily, though, in the ways in which they were intended to do so. It’s no secret in critical circles that much of Lynch’s work (particularly the TV series Twin Peaks, which this particular evening is referenced a lot) is fundamentally concerned with narratives of female victimhood. It is certainly that part of the pop culture world that he gestures towards and whose imagined stability he so effectively undermines. But I’m not convinced that uncritically reproducing said narratives of female victimhood with added nudity actually counts as subversion (or perversion), or even commentary.

Sure, some acts could be read as drawing attention to this very issue. Traumata’s spectacular performance, for example, transforming herself from suitclad rabbit-headed creature into martyresque figure of controlled endurance as blood ran in rivulets from the piercings along her hairline, could be seen in its very staging of the spectacle of suffering to draw attention to her deliberately transgressive female body. So far, so disturbing and clever.

The same could not be said, however, of the writhing blood-covered girl dancers accompanying Louche’s third song. Subtle, that was not. See also: offstage female screaming; the wrapping of screaming blood-covered Laura Palmer-alike in plastic; the periodically-appearing (and unnamed unless it’s a reference I’m missing – he did look a bit like appearing-disappearing dude in Lost Highway but not enough to be sure) White-Face Man laying broken glass under a suspended Snake Fervor; Sabrina Sweepstakes with great skill transforming her head into a clay nightmare while her naked body just happened to get smeared with clay and water. Hmm.

More ambiguous – slightly – is Hotcake Kitty losing her innocence as a more naked Audrey from Twin Peaks, and Snake Fervor’s aforementioned painfully realistic evocation of Ronette Pulaski’s nightmares. Utterly brilliant as Fervor’s characterisation was, that was Victimhood with a capital V – and in the context of all the other things Fervor can demonstrably do, a little disappointing.

In the Club’s defence, Rosie Rowlands’ aerial act is about as far from a display of feminine injury as it’s possible to get. Lithe, dramatic and almost unfeasibly smooth and flexible, her swift ascents and improbable poses are the visible evocation of physical agility and discipline. Similarly, despite having seen Laurie Hagen’s amazing reverse striptease some five or six times now, this is one routine that doesn’t get old. Not only is her superlative muscle control and self-aware creative engagement obvious, she also offers an intriguing and challenging counterpoint to the burlesque tease – and vulnerable victim – stereotypes intertwining elsewhere in the show.

To be fair, Em Brulee never removed any clothes, Heavy Metal Pete made a good Bob writhing across the stage, and you’d have to really stretch credibility to attach much gender ideology to Louche’s fantastic puppet duet (which deserves a mention for its sheer uneasy hilarity) and clarinettist Nathan Evans’ performance (phallic symbolism maybe?) The overall impression, though, left by the night was a lot of screaming, frightened sexygirls and the white- faced dude in the black suit appearing to be sinisterly authoritative and going away again. Which probably is as an accurate a reflection of Lynchian gender dynamics as it is possible to get. But from one of, if not the, cleverest nights in London, I’d really appreciate a bit less reflection and a bit more subversion.

Go on, Double R, you can do it. Fuck with culture as well as their heads.