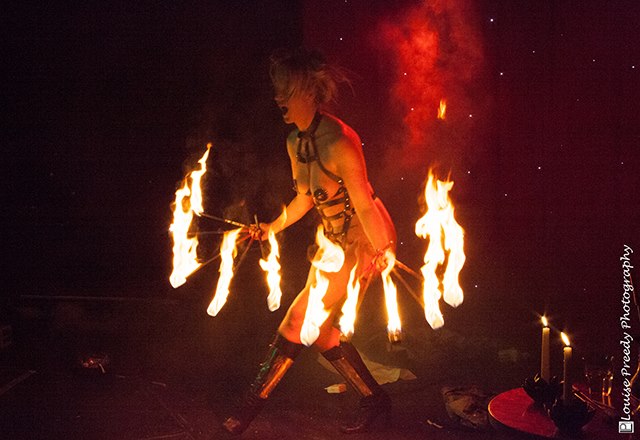 One of the most imaginative shows in London blows out its first candle this week. We speak to producer Vivacity Bliss about Cabaret Roulette’s origins and why it has stayed the course.

It takes a stout heart to even consider putting on a new show in this tough financial climate. We’ve praised in the past producers who convert concepts into productions and, from the penthouse suite of our ivory tower, we like to think we can spot something different and special.

Last November saw the debut of Cabaret Roulette at Madame Jojo’s with playfully tweaked the nipples of bog standard variety and put not the backroom crew but instead the audience and the fans in charge of each show’s theme. A wide range of performers across many genres then interpret that theme and adapt or put together routines to meet it. Predictably, the results are anything but predictable.

Cabaret Roulette’s producer, Canadian burlesque artiste Vivacity Bliss, seems to be onto A Good Thing. As she prepares for the first anniversary, she tells us more about what makes Cabaret Roulette tick.

For the dunderheads yet to see your show, explain the concept as it now stands.

Cabaret Roulette is about removing all safety nets and discovering what greatness and madness is possible when artists are pushed out of their comfort zones. It’s a gamble for everyone involved – the artists and the audience alike – and past shows have proven that there is a real potential to win big.

Each show is themed, but the themes are decided by the audience – first via a public vote on our Facebook site, then a live vote during the show two months prior. The line-up of performers is decided long before the theme is chosen, so they don’t know what’s coming when they sign up. When the theme is known, the performers have roughly eight weeks in which to create a brand new act putting their spin on that common theme.

Very special things happen when the theme selected is perhaps not what the performer would have necessarily chosen. Ginger Cupcake, for example, who is one of the sweetest and most adorable cheesecake burlesquers out there, took on both the Apocalypse and Filth! themes; the resulting acts – a ‘cheering up the troops’ zombie act and the most clever champagne glass act I have ever seen – are unexpected and sublime. It makes me proud to have had any part in their creation!

And, if anyone is wondering, I call dibs on seal clubbing.

How did you come up with that idea? Did it arrive fully formed or did you play around with other versions?

The idea for the show leaped almost fully-formed from a casual conversation with a friend about a possible lion tamer act. “We should both do it!” I said. “Our styles are so different, it would be interesting to see the differences in the two resulting acts!” And the very next thought was “Hey, there’s a show in that…”

And so there was.

The only thing that’s changed since then is that we have upped the ante for the performers. I used to cast once we knew the theme, but found that the rush to cast really limited the pool of potential performers. Amazingly, by shifting to casting blind, the number and calibre of artists interested in doing the show has sky-rocketed, from a handful of talented friends to some of the biggest and most fantastic artists on the scene: lined up for 2014 already we have people like Joe Black, Marnie Scarlet, Holestar, Peggy de Lune and Bettsie Bon Bon. It’s all rather mind-blowing.

Its no small thing to mark your first anniversary. High profiles shows like the Black Cat Cabaret at Cafe de Paris didn’t make it to that celebration. What’s the secret of Roulette’s success?

Ah, poor Black Cat. That was an excellent show.

The secret to our success has to be what I have lovingly dubbed La Famiglia (I like the mafia ring to it), namely all the performers and audience regulars who have rallied around the show over the past year. It is the established performers who took the gamble early on and then went on to recommend the show to their colleagues, the friends who have tirelessly flogged the show to their non-cabaret-going friends and arrive on the night with a group in tow.

It is every one of the performers who accepted the challenge and then ran with it, creating something as exciting and fresh and unexpected as Shirley Windmill and her Funny Bones or Gossamer Thread’s Vaudeville Co. and Love Machines. I may be the one who gets her name at the top of the poster, but, as the saying goes, I am standing on the shoulders of giants to get there.

Are there any themes which are absolutely verboten?

I’d like to say no – what the audience wants, the audience gets! – but the reality is that we’re still trying to sell a product and there are eight artists being asked to commit time and money on an act that they will hopefully be able to add to their repertoire. I’ve only every once exploited my power as the person behind the show and withdrawn a top five, live vote theme from consideration, and that was because the artists were all cringing and crossing their fingers that it wouldn’t win.

We’ve had some real doozies suggested too, mostly thanks to one particular friend of mine. Some of the highlights have been “Medical (Miss)Adventures” and “Being Born is Messy” – neither made it into the top five, much to her chagrin and my relief. Perhaps later…

You bravely tackled Doctor Who as a theme before the BBC intervened. What happened there?

Nothing quite so dramatic!

I work very hard to run Roulette with complete transparency and compliance, so, when Doctor Who won as the theme for the June 2013 show, the first thing I did was contact the BBC to ask for permission. They wrote back the most non-threatening letter possible – “we unfortunately cannot authorise…” – but I opted to play it safe and not market the show using their copyright. June was still an all-Doctor show, but was sold as “Cabaret Roulette: Doctor Wh…. errrr….“Sciiii Fiiii”,” which continues to make me laugh.

What’s the plan for 2014? More of the same or do you have something new up your sleeve?

We have some big plans in the pipeline, so the main priority right now is to keep building and improving the show and building our audience base. We’re getting more non-traditionally-cabaret people involved with the show in 2014, with is very exciting, and I’d like to see that trend continue – beat poets! performance artists! rappers! street dancers! Bring it on!

With such legendary performers lined up for next year, we are going to keep upping the ante, the quality of the audience experience, and the glorious insanity of the show.

…And hopefully move off Wednesdays. Wednesday is a tricky night for cabaret.

How hard is it as a performer to sit on your hands each show and not jump up on stage?

Not difficult in the slightest, actually! The true irony is that I, as the creator of the show, could never actually do it myself. What these artists do is not easy and I am continually amazed by their fearlessness, but I’m happy to sit quietly in the corner cheering them on.

Besides, I love producing, probably more so than performing. The satisfaction I get from balancing a spreadsheet is pretty sick.

Cabaret Roulette’s first anniversary show is this Wednesday at Madame Jojo’s. Full information can be found on their Facebook page.