Review: The Cheek of It! Fifth Birthday Burlesque Revue 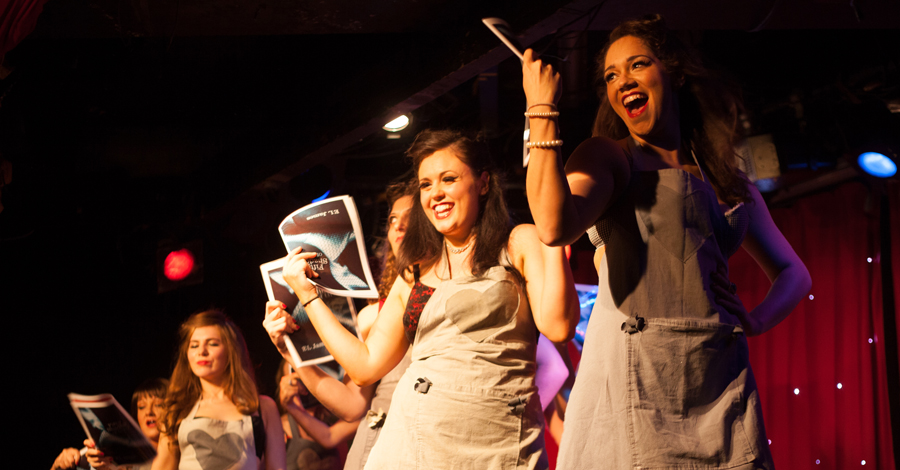 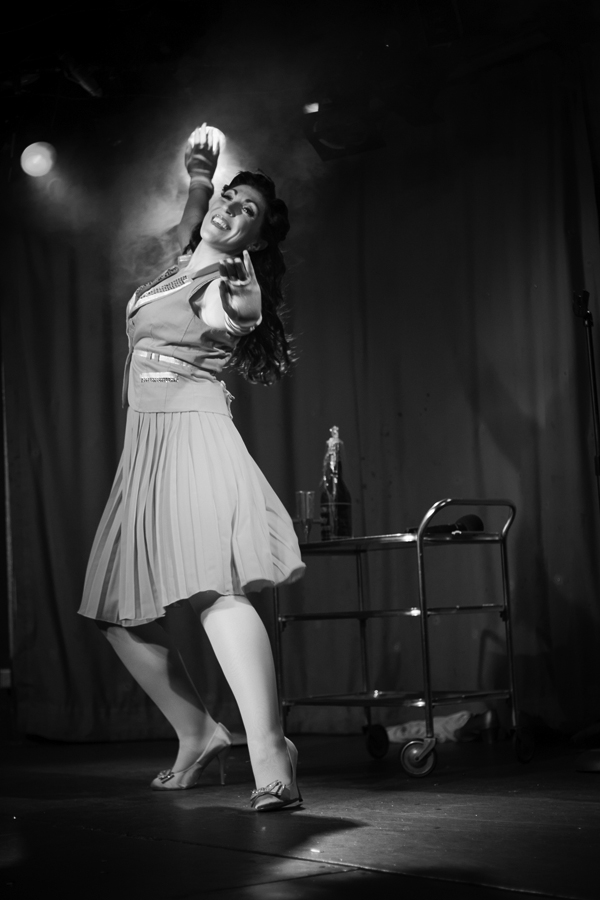 If you’ve been to more than one date of The Cheek of It! Burlesque Revue, you know what to expect: an extensive line-up of acts in different tones of funny and sexy, surrounded by a non-stop party vibe, courtesy of the many friends and relatives who cheer and howl in support of the school’s graduates. The last show of 2012, a celebration of the five years of Lady Cheek’s beloved burlesque school, was no exception, dotting its bill with tongue-in-cheek games, prizes and special guest performers.

As two of the school’s most striking success stories, a pair of burlesque-graduates-turned-teachers contributed their signature skits. Shirley Windmill brought some splosh to the plot with her grotesque song-and-dance pantomime rendition of The Marrow Song, complete with produce sprouting from unexpected places. More unladylike shenanigans followed with Hotcake Kitty’s hen party act, an inebriated striptease of theatrical excess. Socially concerned spectators may think that the alcoholic consumption of Britain’s youngest daughters is no laughing matter, but it would take no more than a glance at Ms. Kitty, bottle in hand and tampon dangling from her hair, to concede the opposite argument.

Just before the revue’s second interval, it was Lady Cheek’s moment to seize the stage. A common treat at the school’s graduation showcases, her fan dance to Hindi Sad Diamonds from Baz Luhrman’s Moulin Rouge weaved a provocative spectacle of subtle insinuation. The Cheek of It! founder moved swiftly through the song’s louder and quieter moods, compounding the dreamy atmosphere of the routine with verve and poise.

Compère Toni Galore presided over the function with her usual low-brow indecency. Her jokes stayed clear from all safe areas, liberally poking fun at everything from underage pregnancy to substance abuse. Galore’s ukulele numbers hesitated awkwardly between humour and seriousness, as in the predictable Ballad of the Bearded She, with its constructive statement against conformity, or her shrieking bawdy parody of My Favorite Things from The Sound of Music. The comic faux pas of her shambolic delivery, however, tickled the crowd in all the right places, both during and between stunts like a round of Pass the Parcel and celebrity birthday quizzes. Fortunate winners walked away with prizes ranging from plastic water pistols to Boylexe tickets. 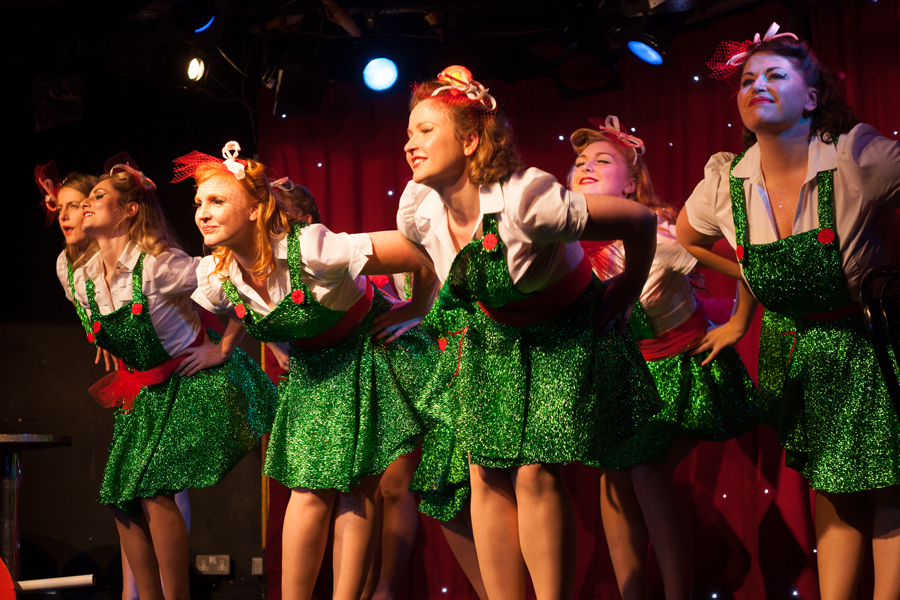 Many Cheek of It! graduates incorporate singing or spoken-word performance into their sketches, blurring the boundaries between burlesque and cabaret. The trend was well represented at the show with ambitious artists parading different talents. Lola la Rouge combined tap dancing and striptease in a budget airline safety demonstration act that would make Fascinating Aïda proud. A nerdy strip by Fanny Dent, in turn, lost much of its humour due to poorly timed teases. Similarly, Ursula Dares’s drag king tribute to Jarvis Cocker spent more time on repetitive banter than on the stalker narrative supporting her onstage transformation.

Like other dates of The Cheek of It! Burlesque Revue, the anniversary special featured two troupes of graduates fresh from the school’s classrooms. Boasting no less than nine members, Mrs. Beat’ems Hot Pots dramatised a collective transformation from grey-aproned housewives to fetishist sex kittens, some of them peculiarly convincing with their Fifty-Shades-of-Grey-inspired props. Later, Santa’s Ho Ho Hos, an eight-strong staff of elf belles, couldn’t help going from nice to naughty as their employer increased the speed of their bag-filling duties. Juxtaposing gradual variations of a facetious choreography, the number was the first ensemble act supervised by Carmella de la Minx, another burlesque performer and teacher at the school. 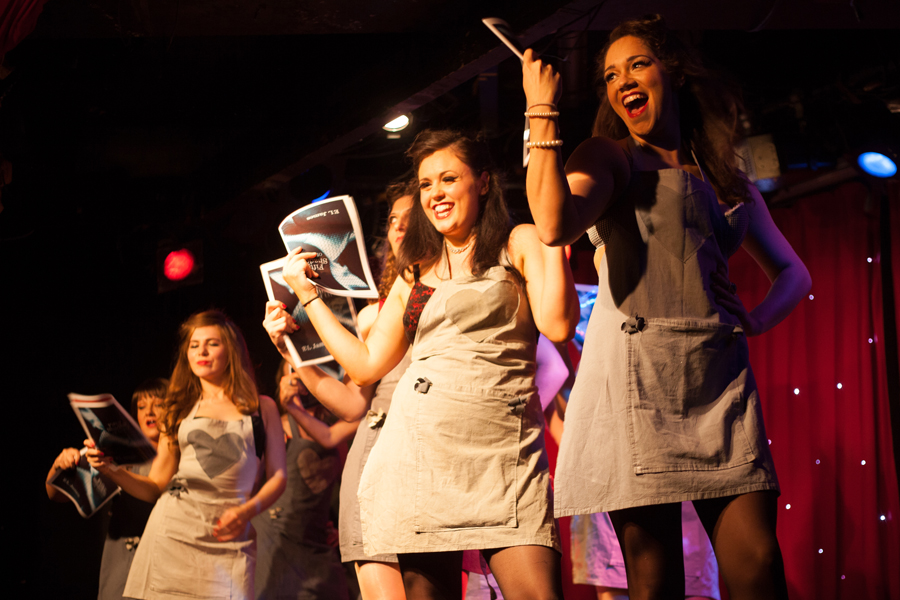 The Cheek of It! Burlesque Revue is a laid-back night of frivolous laughter and sensual charm. As the face of Lady Cheek’s celebrated school of tease, it offers burlesque enthusiasts a prime spot to catch new talent in the scene before they make a name for themselves. However, beyond its industry credentials (and the many breakthroughs The Cheek of It! has accumulated in its five years), the show speaks for itself: watching the ladies strut their stuff in all their diversity is a lot of fun, and that alone is plenty of reason to keep an eye on upcoming dates.