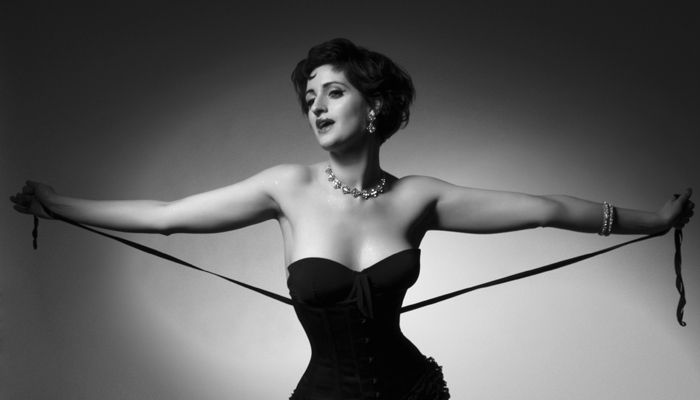 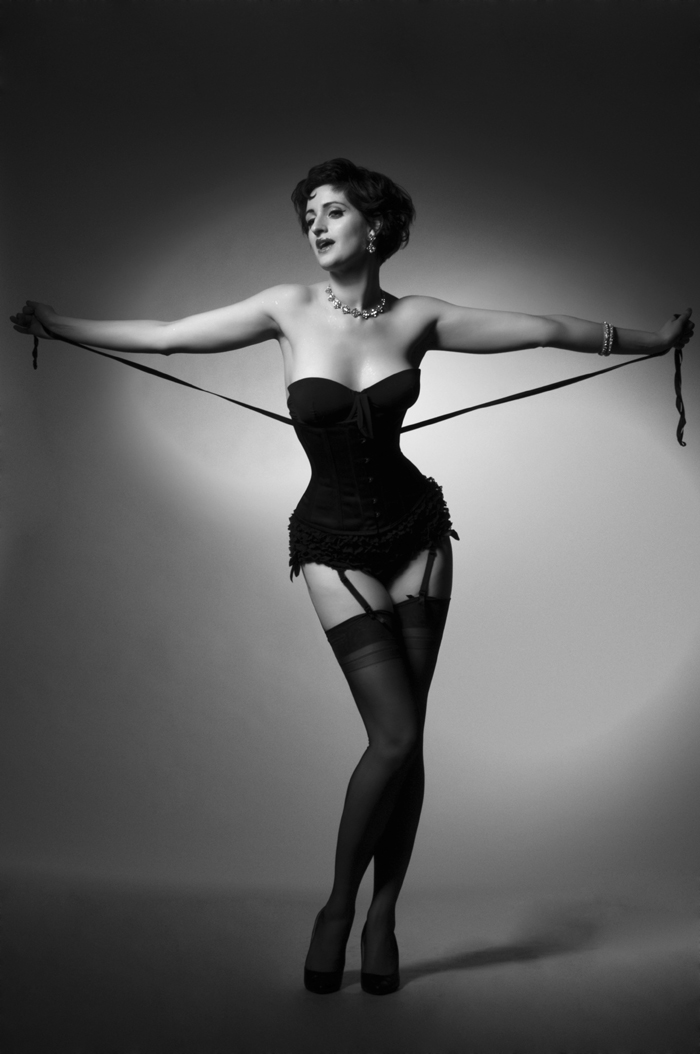 Lady Cheek, founder and main teacher at The Cheek of It! School of Burlesque

Has it really been five years since The Cheek of It! started its influential series of burlesque courses? C.J. Lazaretti talks to founder Lady Cheek about the impressive achievements her school has amassed in its hectic rise to prominence.

“The last five years have been a fly-by-the-seat-of-our­-frilly-knickers experience,” says Lady Cheek. Like everyone else, she is surprised at the increasing demand that her school has seen since it opened its doors in 2007.

Five years, 3,000 graduates and numerous awards later, The Cheek of It! has become one of the foremost burlesque schools in the world. Its roster of alumnae includes established performers who enjoy busy careers in the UK and abroad.

The cheeky demoiselle herself has taken a quick break from the preparations for The Cheek of It’s upcoming anniversary show to look back at her baby’s history. The five highlights she’s selected for this brief retrospective are a testimony to the impressive success of a simple business idea with “inspiration, empowerment and fun” as its founding principles. Likewise, they are a testimony to the continuous growth of burlesque as an increasingly complex and popular art form.

Highlight 1: the Hen Party to End All Parties 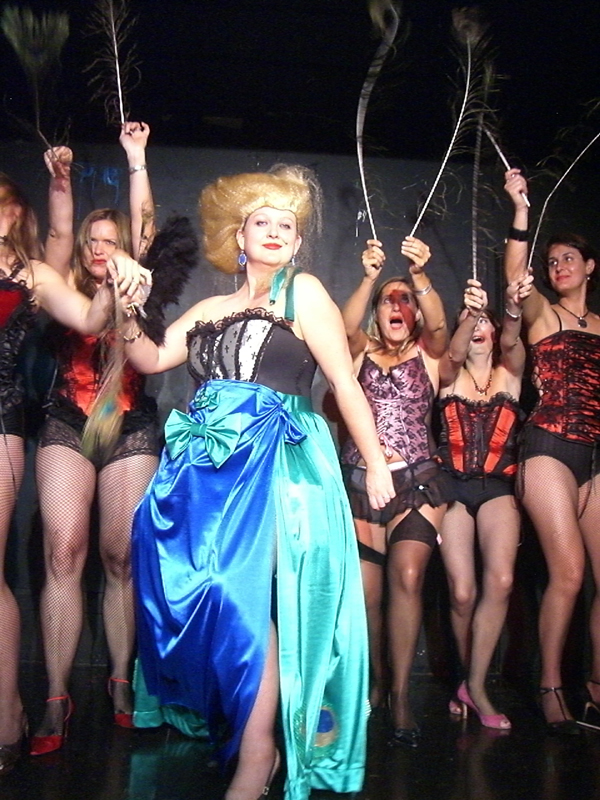 Fine feathers: The Cheek of It! started as a burlesque prank Lady Cheek conceived as a hen party gift for a friend, back in 2007

For many women having their first taste in burlesque, a hen party is where it ends. For one, it was just the beginning. When bride Victoria Greenley inventively settled on a peacock-themed wedding in 2007, her maid of honour hired a cheeky Zoe Charles to make the hen do unforgettable. She designed costumes for her and her bridesmaids, taught them a bespoke choreography and even commissioned songwriters to serenade Greenley with original Charleston numbers.

The big surprise was that she’d booked the impromptu troupe to perform their act at weekly show Duckie, at the Royal Vauxhall Tavern, in front of a real paying audience. “I’ll never forget when Vicky ripped off the front of her skirt to reveal a huge peacock head strap-on,” says Charles, nowadays better known as Lady Cheek. “The crowd went wild.” Five of the bridesmaids would go on to take further classes in what quickly became The Cheek of It! school of burlesque.

After Lady Cheek’s debut at the following year’s London Burlesque Fest, Channel Four enlisted her collaboration for a new programme called The Sex Education Show. Her job was simple: teach a burlesque routine to presenter Anna Richardson and prepare her to perform it at the then newly opened Brickhouse.

The Lady was nervous about her television debut but, in a curious inversion, received plenty of support from her student. “Anna really got behind what burlesque is, and fought our corner when the producer wanted to make it all about sex.” The school still attracts enquiries from reruns of that show.

Cheek spent much of 2010 between New York City and continental Europe teaching international workshops. After a few dates of Gran Varietà, a monthly night in Turin where she performed alongside graduates Hotcake Kitty and Shirley Windmill, Spanish promoter Keti Kit invited her to teach burlesque to Serbian women. Having survived a brutal war less than 20 years before, most of them had promptly learned to suppress all expression of sexuality and femininity in the interest of safety from sexual abuse.

Promoting burlesque among such memories, to an audience whose nearest reference was lap dancing clubs, proved daunting at first. Before the year was over, though, Cheek met enough demand to run three more workshops in the city, and the hype grew quickly. “Hotcake Kitty and I were invited to every TV show, from the Belgrade version of This Morning to the Serbian MTV, and even the local Celebrity Big Brother,” says Lady Cheek. “Of course, I valued my life far too much to actually consider it. But it was brilliant to be asked.” 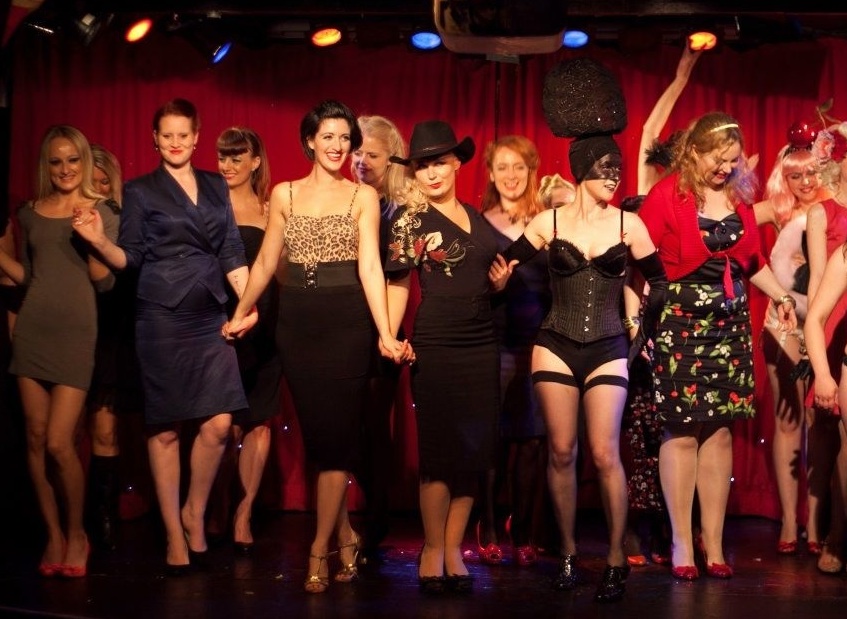 Lady Cheek always joins her graduates at the final bow of graduation show The Cheek of It! Burlesque Revue

Highlight 4: The Cheek of It! Burlesque Revue

The school’s graduate showcase, now a regular feature of London’s variety calendar, had its inaugural date on March, 2011. The Cheek of It! had just doubled the number of courses on offer, at this point taught by Kitty, Windmill, Carmella de la Minx and Trixiebelle Firecracker. Madame Jojo’s was filled to capacity to watch 22 new graduates and ten alumnae from previous courses. The show has often sold out at its subsequent editions.

It was also during this time that Cheek hired her right-hand lady, performer and “minx-a-million” Voodoo Fury. “From writing newsletters to hosting events, she can do it all. Not to mention that she looks darn hot in a merkin.”

Highlight 5: The Clit of It

On July 24th, 2012, Lady Cheek celebrated the second year of her involvement in World Femininity Day with The Clittorati Party. The event brought together burlesque, spoken word and comedy to promote awareness of the international date, an initiative by the Orchid Project charity, to fight genital cutting in developing countries.

This Is Cabaret’s own Gui O’Connor was there to see the ladies flashing outdoor crowds from the window of the Paper Dress vintage shop in Shoreditch. Their handmade C-strings, assembled at an afternoon workshop, made quite an impression on both sides of the glass. 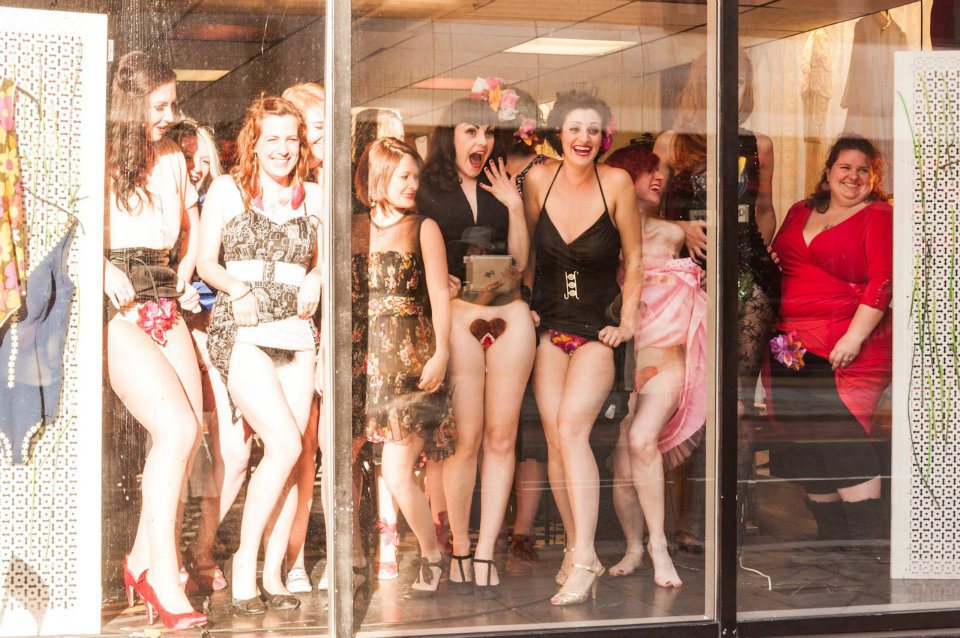 After a summer of cruise shows on the Thames, The Cheek of It! is nearly ready for the debut run of its boylesque course, supervised by “queerlesque” artist Mister Mistress. This Is Cabaret salutes Lady Cheek on the success and influence of her prolific hen party, and looks forward to the next five years.

Lady Cheek and her cheeky crew celebrate the five years of their school with The Cheek of It! Birthday Revue, at Madame Jojo’s, on November 18th. See www.cheekofit.co.uk for tickets and details.

Correction: this article was emended on November 19th, 2012. It previously described Victoria Greenley as a friend of Lady Cheek, rather than an unacquainted client.