The Sleaze Daddy Is Back: Mat Fraser Talks Sex, Marriage And New York 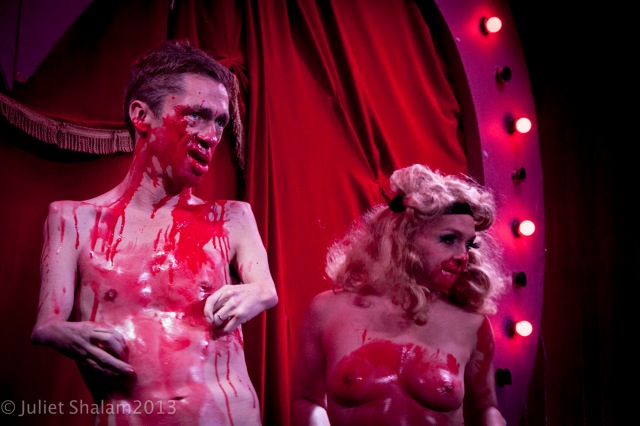 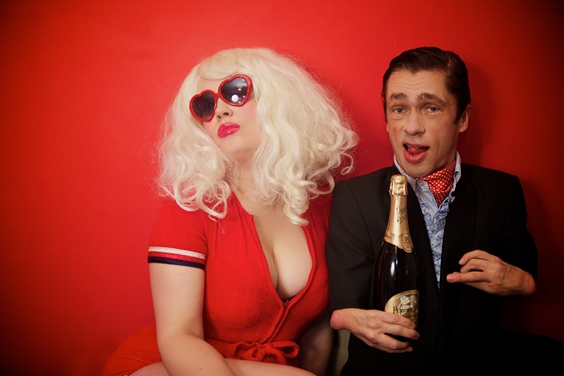 Bottoms up: Sleaze is back this week with Mat Fraser and Trixie Malicious (c) Sin Bozkurt

Will the real Mat Fraser please stand up? In 2012, London saw two very different sides to the performer. In his own London show Sleaze as well as the Double R Club and White Mischief, audiences saw him him rock out with his cock out while, over at the Olympic Stadium and the Paralympics, millions of people on TV and tens of thousands in the audience experienced a different side as Fraser hosted part of the opening ceremony then returned for the closing ceremony to play drums with Coldplay. No mean feat for someone born without opposable thumbs.

Since we last spoke to him, Fraser has been busy working in New York with his wife (burlesque performer Julie Atlaz Muz) but he has returned to terrorise London over the next four months. One highlight is this Wednesday’s special edition of Sleaze, another demonic brew of Big Apple-style cabaret hosted at the Lockside Lounge. The latest show is inspired by Dixie Evans, the godmother of modern burlesque who passed away a month ago and who is the subject of the current Dixie Evans Week of fundraisers.

We looked deep into Fraser’s eyes and asked him some searching questions.

Let’s start at the beginning. How did the Sleaze show come about?

Daniel Conshie , the owner of the Lockside Lounge, worked as a barman in New York City for a while. He loved the burlesque shows being produced by Runaround Sue but wasn’t so keen on the more prim and proper British style of burlesque that was around three years ago.

He later set up the Lockside Lounge and wanted to have a NYC-style show there and asked Sue to recommend people in London who might be able to provide that. Trixie Malicious and I took on the bold proposition, glad of the opportunity to make a show that was very different to then vast array of supperclub shows in London with their “well dressed” audiences, classic burlesque, retro Thirties and Forties styling, two pairs of tights and knickers on, gingham aprons and cliches to the fore, obligatory tassel twirling at the end and a very British, almost conservative aesthetic.

We wanted to provide an alternative to that, much more in the style of typical Big Apple clubs like Slipper Room which have their own style of burlesque show: more neo-contemporary, raunchy, silly, political, anarchic, queer, dangerous, wild, sexy, unashamedly stripteasing fun. Trixie and I talked this up, then got to the name, and very quickly, she suggested “Sleaze”, which immediately spoke to us, and the now wellknown club was born, ugly, alone, in the corner of cabaret in London.

When we started, we were very much alone in this aesthetic, only seeming to have anything in common with New York shows, but now some other people are also interested in this style. I do think though that Sleaze, more than any other striptease/burlesque variety show in London, offers performers the opportunity to enjoy blurring the lines between burlesque/striptease genres, getting completely naked if they want to, and our interactive audience games also set us apart. 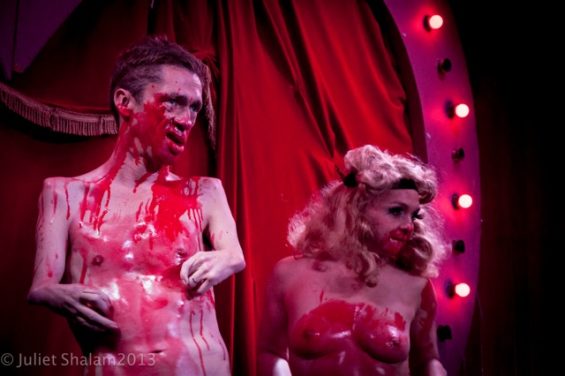 What are the pros and cons of being married to another performer?

Manifold! You utterly understand each other and that can really cook onstage with a symbiosis that can’t be replaced by mere friendship. Of course, sometimes life can bleed into the art in a bad way, and you have to watch out for arguments being carried to work and for us particularly never letting yourself rest.

However I do find the pros far outweigh the cons and Julie and I fucking love working together. In fact, so much so that we’ve just engaged in a new piece: our new company OneOfUs’ inaugural theatre production Beauty and the Beast, directed by Improbable’s Phelim McDermott. We’ll be touring that show in November and play a three week run at London’s Young Vic Theatre in December.

And that’s not all: we’re also working on a new Freak & the Showgirl cabaret show for next year, called Brave Nude World.

People like Sxip Shirey and Penny Arcade have spoken about how the increasing gentrification of New York has led to there being less cabaret overall and more mainstream shows. Would you agree?

Well from what I’ve seen over the last seven over the time I’ve been working in New York, I would agree about the gentrification. The Slipper Room went dark for two years for refurbishing; in that time, their crowd changed from more au fait and down with it to more uptown and tourists of burlesque-ish, although they were still prepared to get fucked up and shout.

But the realm I tend to work in there, downtown in character and late night, seems to be roughly the same in the number of shows. When one goes down another pops up meaning that Brooklyn seems to have a much bigger scene than before and there are so many new people coming into the scene making their own shows and nights.

This year’s Fringe saw Americans do well with Red Bastard, Scotty The Blue Bunny and Lynn Ruth Miller getting rave reviews and, in Miller’s case, an award. Meanwhile, London’s ICA saw Miss Rose Wood make a rare and memorable appearance outside The Box. Which US acts should we be looking out for next?

What is your definition of cabaret?

Performing without a fourth wall is the foundation of cabaret. Even if you pretend as part of the act that there is one, there is still an understanding in the room that, behind the character, there is a performer reaching out to the audience unlike in theatre where onlookers are asked to ignore the actors and focus on the characters.

A crucial element for me is about being aware of the audience and the modern world by directly dealing with themes, issues and life around us in some way changing or at least challenging audiences’ minds and ultimately entertaining people.

My definition has changed in the last few years from thinking it has to be certain things to letting it be anything as long as I’ve covered the stuff above. Thankfully, the Double R Club, the only cabaret company to book my work in London, has helped this thought process along and released me from previous bonds of stage behaviour, albeit often with disastrous results as anyone who’s seen my work might say!

What do you enjoy most about the London cabaret scene?

The immediacy of the genre mostly. I also love the Double R Club. The scene is growing, absolutely, but the forces of conservative-with-a-small-c aesthetics, politics, and behaviour are always encroaching, and they are bad things people, which the Cabaretti must resist!  I see so much of it around in so many of the shows. Say what you like about The Box, but they still time after time provide an alternative to that, not that anyone except rich glams can go to see it.

I enjoy being treated like an equal, something that happens so much less to me, a disabled man, in theatre. But, it always confuses me when people don’t book me “because I’m a bit too much, and I might get my cock out” or whatever people usually say. I hosted the opening ceremony of the Paralympics, 65,000 people, and managed to keep my cock in my pocket, not say fuck, and generally be a nice hosty person for them. I guess its my own fault for doing such evil shit at Double R over the last few years! 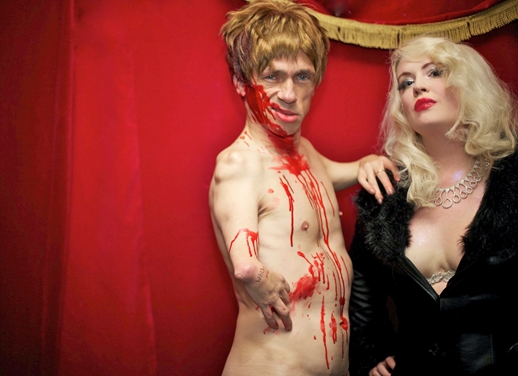 What is your advice to performers just entering the scene now?

Fuck off! No, seriously, be brave, don’t believe the hype (especially about yourself), allow yourself to feel uncomfortable and indeed make sure you do that.

It is important to be good and by that I mean be accomplished at what you do – I don’t want to watch someone practising -, and don’t just copy shit off someone else’s YouTube clip. Be original, not like other stuff you’ve seen.

Be prepared to pay your dues. That takes time. This is not a TV talent show. Have fun, be clever, change some stuff. Oh, and don’t have short arms! No, I would very much love to see another one of my people on the cabaret stages of London

Sleaze returns this Wednesday to the Lockside Lounge.