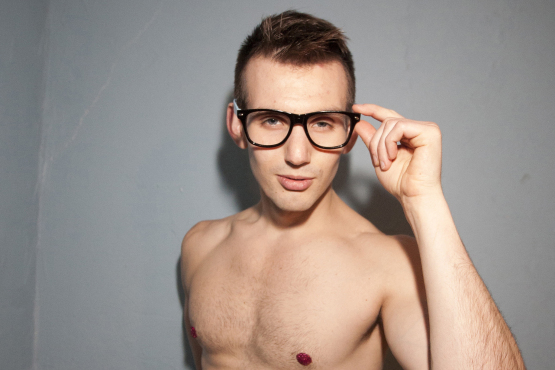 Despite only appearing in porn flicks since last year, American boylesque star Chris “Go-Go” Harder is claiming that his nascent blue movie career has blocked his return to the New York Boylesque Festival. Writing in Queerty, he lays it out plainly “My on camera adventures are apparently just too hard to handle for the producer’s  (sic) of the Boylesque Festival, and it was made clear to me that I was not welcome on either night’s stripping festivities, despite the fact that I had helped organize year one’s events and that a quarter of year two’s participants had all taken my Boylesque classes.”

He also touches on what may be an emerging theme: the sexual discrimination by some within the burlesque industry against men. As we wrote last year, boylesque has never been in better shape in London. A staple of the rather fine Soho Burlesque Club at the Hippodrome Casino, the talented Phil Ingud is a classic example of how male strippers can appeal to a mainstream audience. Superstars of London’s burgeoning queerlesque scene including Mr Mistress and Miss Cairo have been strutting their stuff all over the capital while Howard Wilmot’s Boylexe – now fronted by two-time London Cabaret Award winner Alp Haydar – goes from strength to strength.  Despite this, the London Cabaret Awards judges’ ten nominees this year were all female.

“As far as past festivals go, Chris did not help organize the 1st Annual Boylesque Festival; he taught a class in conjunction with the festival and made all the money that was generated from that class, and yes, there were performers that participated in the 2013 festival that had taken classes from Chris, but certainly not a quarter of the festival performers as he claims.”

It is clear that Harder won’t go quietly. In his own response to the producers, he said:

“While I would not back track on my words, in fairness to the producer’s of the New York Boylesque Festival, I do recognize that there were personal issues involved in the decision to not allow me to participate in this year’s 2014 Boylesque Festival. Specifically this: I was involved with producer Daniel Nardicio in a long term relationship which ended in June, 2012. While I would never imply that either producer is “anti-sex worker,” I do feel that my recent porn career was one of the main reasons for my exclusion from the festival apart from the fact that Nardicio and I were former lovers. This becomes even more apparent to me after taking into account that I was allowed to participate in the 2013 Boylesque Festival almost a full year after ending my relationship with Nardicio. I’m thus left with the conclusion that , making the decision equally personal and well, “porn-y.” Again, I feel this “Boylesque benching” is hypocritical and unfair, but I also know it’s not my place to tell anyone how to cast an event. However, it is apparent to me that my sex work is definitely a huge deciding factor in their decision, relationship or no relationship.

Six Reasons Not To Date A Burlesque Performer