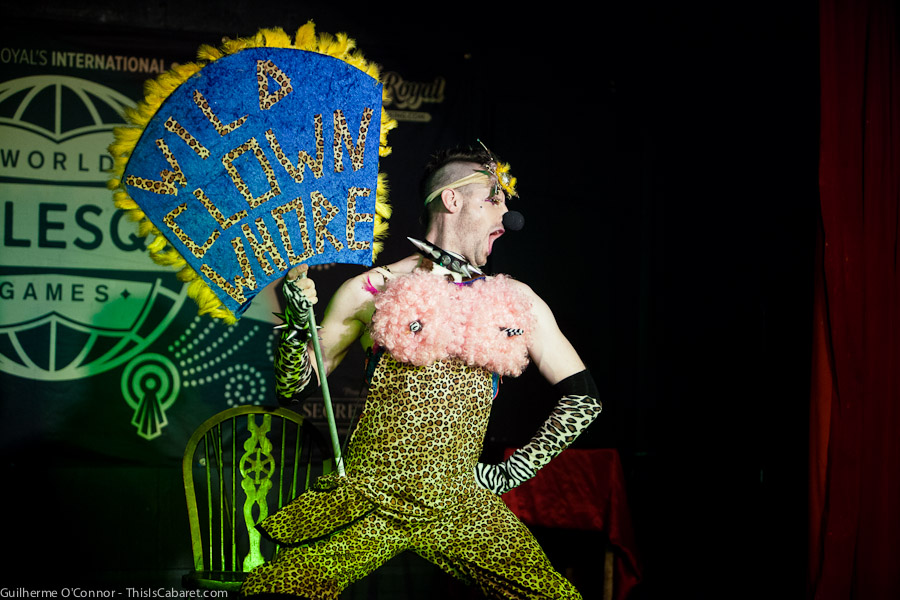 Pitched at the halfway mark of the World Burlesque Games, the festival’s all-male event drew a packed crowd to a humid Royal Vauxhall Tavern on Thursday night.

This was not the first night this week in which men featured prominently: on Tuesday, Kiki Lovechild was the first runner-up for the Triple Crown, while last night Big Chief Random Chaos walked away with the Twisted Crown. This evening, though, was wall-to-wall boylesque with both British and World crowns up for grabs, and where better to hold it than the capital’s Mecca of gay cabaret?

Host Joe Black kept the audience at fever pitch and, while ad-libbing may not be his forte, he connected strongly with the large numbers of women as well as the men. Of all the showcases thus far, this was the most appreciative audience with catcalls, whoops and shouts of encouragement ringing out throughout the evening.

The first half was dedicated to the home side and first out of the traps was the more-English-than-thou Lord Ritz in top hat and tails. The Downton Abbey garb and his boy-next-door looks won him more than a few admirers even if his choice of song (I’m Too Sexy) and Union Jack briefs were unoriginal. Duke de Milo let his magic tricks and Chicago dance routine do

the talking (which may be just as well considering his last outing), while Mister Mistress gleefully crossed the gender boundaries like a blind jaywalker with his high-tempo routine, painted beard and multi-tasselled dress.

Slowing the pace to a crawl, singer-boylesquer Spencer Maybe – aided admirably by the lovely Bettsie Bon Bon – gave us a Parisian-themed seduction scene. Opinions of the act varied amongst the audience members I spoke to, from sensual” to “glacial”, while I was reminded of similar routines performed by Prince some twenty years ago as part of his live show. Following Maybe was the first performer to engage the audience in banter; Hooray Henry stoked the crowd as he arrived on stage in expeditionary gear wielding a lit double-ended torch, which he twirled every which way but loose. Actually, that’s not strictly true as he fumbled the prop twice, but the some-time puppeteer drew on his theatrical roots to put on a visual spectacle every bit as dazzling as this year’s Triple Crown winner Anna The Hulagan.

The final act of the British section was the most memorable. Studying for a PhD in boylesque (yes, in real life), British Heart appeared in mad scientist mode (goggles, lab coat, the whole kaboodle) with an evil glint in his eye that warned of what was to come.

His fast-paced strip led to him being left with just a cock sock to preserve his modesty. But he wasn’t finished there, not by a long way. Face down on the ground, he yanked off the sock, then proceeded to cover his manhood with successive layers of shaving foam before plunging naked into a crowd that rapidly parted to let him through. An audience member and one of the judges, burlesque performer and teacher Lady Cheek, were briefly hugged (and covered with foam) before he dashed out of the Royal Vauxhall Tavern.

The foreign contingent had much to live up to and the early signs weren’t promising. Ghent’s The Great Leo may have had the kookiest prop of the night in a full-size gramophone, but his vintage routine was, well, routine. Many in the crowd didn’t care for the initial static geisha fan dance of Milan’s Alan Debevoise, which dampened the effect of his subsequent military fetishwear reverse strip.

Smokin’ McQueen‘s brilliant updating of the classic Josephine Baker “banana skirt” dance (last seen in Crème de la Crème Cabaret) was thrilling, punchy and direct. Had tonight been all about the shimmy, he could have ranked even higher than second runner-up. Unfortunately for him, the final two performers pushed the boat out into so far uncharted waters.

There was nothing coy about fellow American Go-Go Harder’s tribute to Brokeback Mountain as he worked his way down to little more than a ten gallon hat and a smile. Well-muscled Spanish aerialist Marcos may have started his show with a cheesy Freddy Mercury maneuver, but his backflip and handstand on the venue’s tiny stage won him many sighs and gasps from an appreciative crowd.

Tonight’s show repaid Chaz Royal’s faith in giving over an entire evening of the festival to boylesque again. Moreover, it amply demonstrated that anything the ladies can do, the lads can do just as well.