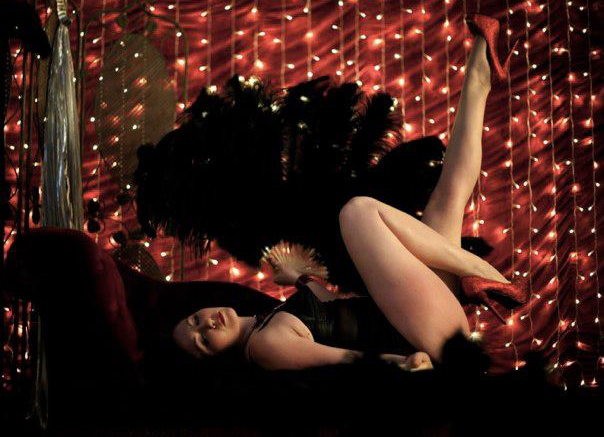 Venues can make or break a show. With the London franchise of Warwickshire revue Crème de la Crème Cabaret, it’s very much a case of the latter. Despite a good average of burlesque acts, it’s hard to be captivated when patrons have to brush past the dancers on their way to the toilets.

Annie’s Bar in Kentish Town is a perfectly good establishment for a few drinks after work, but lacks the minimum infrastructure for variety. Facing the audience from one end of a narrow bar that seats about 50 people, its minute stage could hold a stand-up comic or a guitar player at the most. However, even they would have to struggle for elbow room next to the rack-mounted sound desk to their right, and mind the stream of cables around their feet.

Singing striptease is a heavy presence in the bill. With a pair of war-themed skits, Elsie Diamond is a one-woman show. Tackling classics like There’ll Always Be an England and Florence Desmond’s The Deepest Shelter in Town on the ukulele, she boasts mellifluous vocals before launching into comely strip numbers full of poise, when she promptly recruits a helper from a table to remove one of her stockings.

Clad in beautiful costumes of her own design, producer Scarlet Cuffs wields palpable allure with a sex kitten voice and showgirl shimmy. The belle switches from insinuation to brassiness with ease, raising the tempo for sharp rock and roll moves to the tune of Wynonie Harris’s Lovin’ Machine. The vintage theme continues as Fillie J’Adore does Big Spender. Though contributing a stilted, lifeless strut for a strip, Ms. J’Adore nevertheless works the audience with charisma and spontaneity. She rubs a bald head here, exchanges close glances there and marks the transition from singing to striptease with a coin-picking narrative, in an ambitious routine that suffered greatly in the confined space. 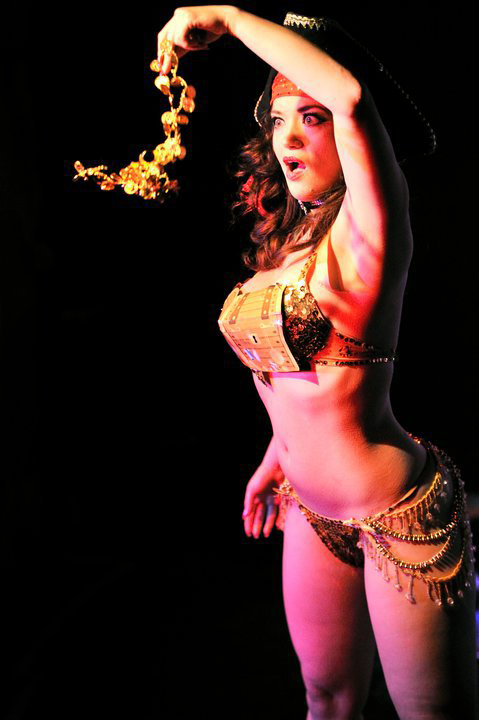 The challenging surroundings proved no obstacle for Smokin’ McQueen. Wearing little more than a Josephine Baker banana skirt, the American boylesquer shines with a compelling, athletic choreography to King of the Swingers. Congenial and sprightly, this breathtaking jungle dance wouldn’t be out of place in the Cotton Club. Later, guest headliner Bettsie Bon Bon (of excellent troupe The Folly Mixtures) gives a passionate tour de force in sumptuous seduction. Swaying to the sultry soundtrack of Barry Adamson’s The Big Bamboozle as she writhes provocatively amidst the public, Ms. Bon Bon’s steamy brand of burlesque is an unforgettable sight, of the kind you might end up daydreaming about.

Little can be done about most of the venue’s inadequacies, but to see its few theatrical resources go to waste is nothing short of baffling. Footlights at the front of the stage lose all their impact as the undimmed house lights remain in full glare throughout the show. Likewise, open curtains let in all the distractions from the adjacent high street. Add to that an act like Betty Wishes, a predictable strip-for-competition-scores routine where the performer calls for audience cheers even when she’s just standing still, and you can’t blame the crowd for turning their backs on the stage and talking among themselves.

It’s no wonder that the most engaging moments of Crème de la Crème Cabaret are the comedy games pitching members of the audience against each other. Arbitrating over a chat-up line contest and other sex-themed gags, compère Miss Jones handles the unruly crowd with quick improv wits and timely magic tricks, like producing a G-string out of a male contestant’s pants. Her singing striptease bit, a chav burlesque sketch confronting patrons with gang signs and threatening taunts, is drab and prosaic, despite convincing street dance steps.

Talented regulars and established guests cannot add up to an engrossing programme under such strenuous circumstances. Considered as a whole, a bumpy affair like Crème de la Crème Cabaret is just not worth your time, and the four pounds that the tickets cost are better spent on another drink.