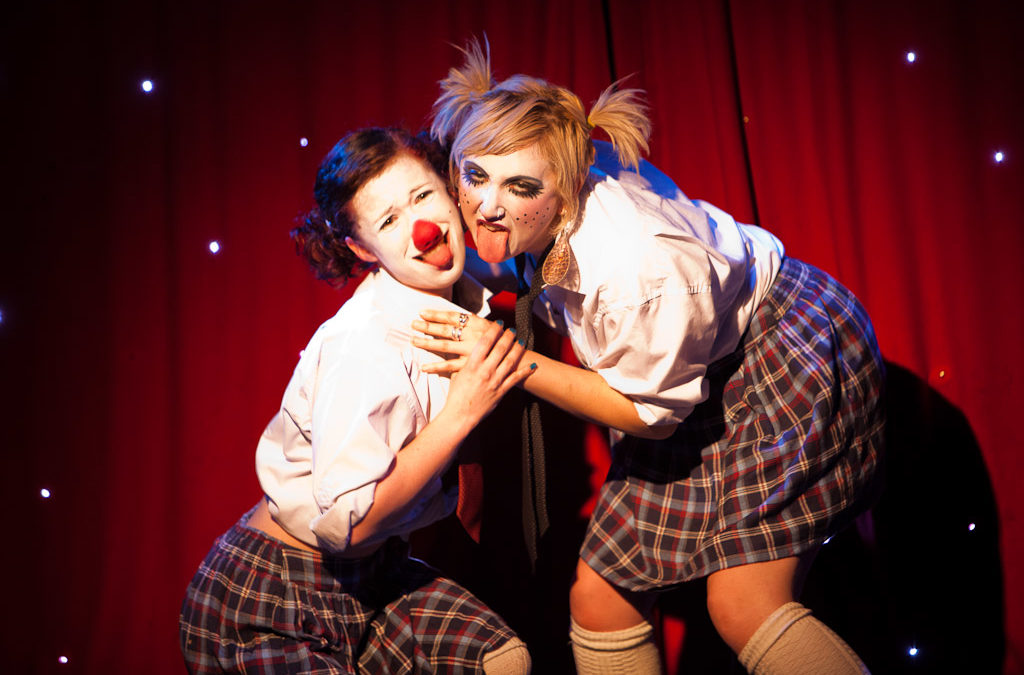 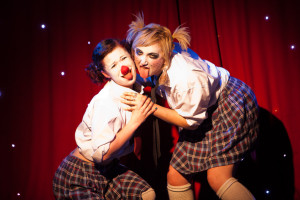 March ended on a high note in the world of cabaret and burlesque. Gloves, pasties and merkins came off in Soho for a special farewell engagement, the Scala at King’s Cross hosted the first taster of Chaz Royal’s upcoming Olympic festival and a rock crowd got more than they bargained for in at least one Camden venue.

Bête Noire wrapped up its year-long run at Madame Jojo’s on Thursday with a concentrated dose of its customary filth courtesy of sordid ringmistress Ophelia Bitz, resident troupe The Late Night Shop and other illustrious blackguards like Laurie Hagen and Dusty Limits, leaving a trail of wet, lipstick-smeared patrons in their wake. The beastly double bill climaxed twice with unusually revealing reveals, courtesy of uninhibited ladies Kiki Kaboom and Luna Rosa (as well as Jojo’s oft-overlooked full-nudity licence). This Is Cabaret witnessed the memorable knees-up first-hand and spoke to some of the guilty parties: read all about it in our Bête Noire feature.

Beginning with a queue mix-up that caused a sizable part of the public to miss the first acts of the evening, the World Burlesque Games teaser show kicked off with more bump than grind. But the biggest blunder of the Friday evening was host Duke De Milo: naming the wrong sponsor, leaving performers to start their acts unannounced and covering up for technical glitches with a capella singing, the boylesquer at least succeeded in drawing attention away from his tepid banter, made of little more than Geordie references. The bill boasted the enviably wide range that variety crowds have grown used to in Chaz Royal events, pairing the pin-up charms of Frankii Wilde and Jolie Papillon with more modern fare like Anna the Hulagan‘s epically scored hula hoop number and a Skype sex mock-reenactment by sex blogger Rubyyy Jones. Highlights included Raven Six‘s deathly fan dance and a homoerotic catholic allegory by the androgenous Mister Mistress, complete with Isis wings and plastic penises (notice the plural).

London audiences were treated to a glimpse of Dublin variety with a one-off engagement of Big Chief Random Chaos’s League of Decadent Bastards. Struggling with the last-minute closure of its original venue, Mass in Brixton, the manic revue found a new home in Camden’s Purple Turtle.

Consisting largely of remaining concertgoers from a preceding rock gig, the audience was visibly puzzled by the Chief’s unpredictable antics. Stamped on many faces was the bewilderment of the cabaret virgin, minus the usual embarrassed bourgeois smile. From a hesitant wariness that had locals like Mr Pustra and Vivid Angel struggling for reactions, despite the latter’s quick succession of skin-piercing, nose-nailing stunts, they gradually warmed up to Marnie Scarlet‘s awe-inspiring inflatable gender-bending act and the explicit musical parodies of Dusty Limits. Mash-up duo Rayguns Look Real Enough provided them with a more relatable point of reference, weaving hits by the White Stripes, Snap and Lady Gaga in their frantic foot-stomping medleys.

Judging from the visiting Irish vaudevillians, the loud and edgy style of cabaret performance typical of the American Southwest has found a fitting counterpart in Dublin. Cult horror set the tone for a pantomime-cum-video-projection Poe tribute by the zombie-like Siamese Scream, as well as Lucy Rhinehart‘s audience-sprinkling exorcist parody. Tattooed belly-dancing duo The Orchids presented a lengthy series of dance-offs, while the Chief himself survived his trademark hair-igniting routine with little of his mohawk left for his next gig.

Though uneven and riddled with crackling microphones and other sound malfunctions, the Bastards offered an instigating carny of gritty outrage. Should this initial foray away from their native Eire prove to be the first step of a fledgling roadshow, the League would surely become a most welcome visitor. London, for one, could use more shows like this.