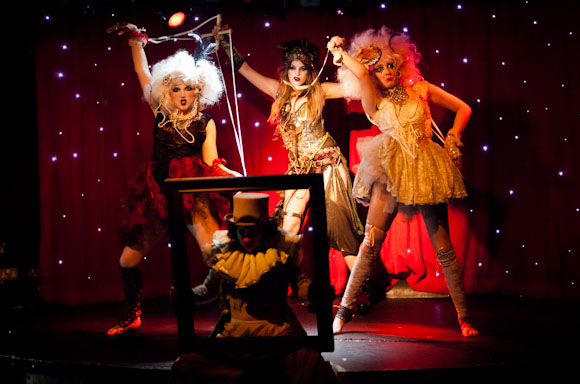 Social reformers have one less reason to worry about Soho: after a year’s reign on the prestige Thursday night spot at Madame Jojo’s, Bête Noire has been put to sleep. The black beast was London’s foremost showcase for raunchy burlesque and politically incorrect cabaret. In true rebel fashion, it refused to fade away, burning out with a bang instead of a whimper with a star-studded roster of vaudevillians on March 29th.

In its short lifespan, Bête Noire rose from the ashes of Shoreditch club night Saturdays at the Last Days of Decadence to a prominent position among London’s leading variety shows. Offering a consistent mélange of controversial humour and sexually aggressive entertainment without the pomp (or the ticket prices) of more established supper clubs, the Soho revue quickly became a favourite of performers, who invariably rubbed shoulders with a captive and diverse regular audience. 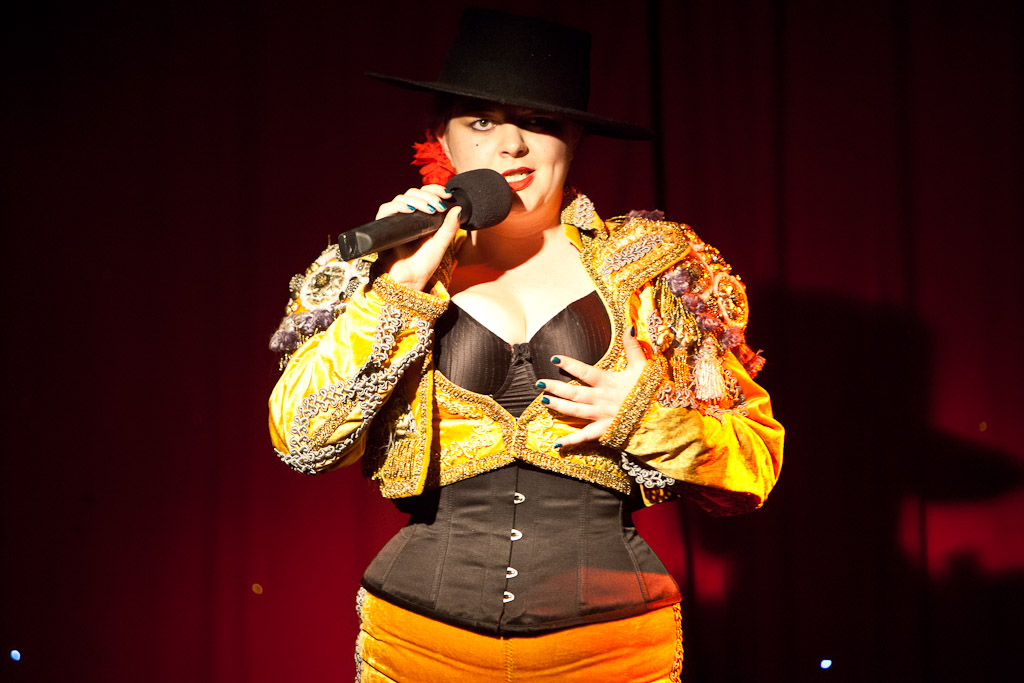 Ophelia Bitz, and not just yours

“Audiences are getting tired of the ‘empowerment’ angle in burlesque and all the vintage trend of beauty and elegance that comes with it,” says Bitz. “Performance always involves fabrication, illusion, but people are also drawn to truths. That’s part of the appeal of Bête Noire. We exaggerate a lot – of course I don’t have a kilo of crack in my pocket – but the person you see and hear onstage is still me. If I say I had a quickie during the break, it’s probably true.”

Ophelia Bitz is renowned as much for her blunt humour as for a song repertoire consisting largely of modern alternative and indie tracks with lyrics ranging from outrageous to gloomy. The last Bête Noire was no exception: punctuated by some of the most recurring tracks in her outings, like Troy Hess’s Please Don’t Go Topless, Mother and the cantankerous sing-along anthem No Children by The Mountain Goats, the show was the closest she’s come so far to having a greatest hits concert. 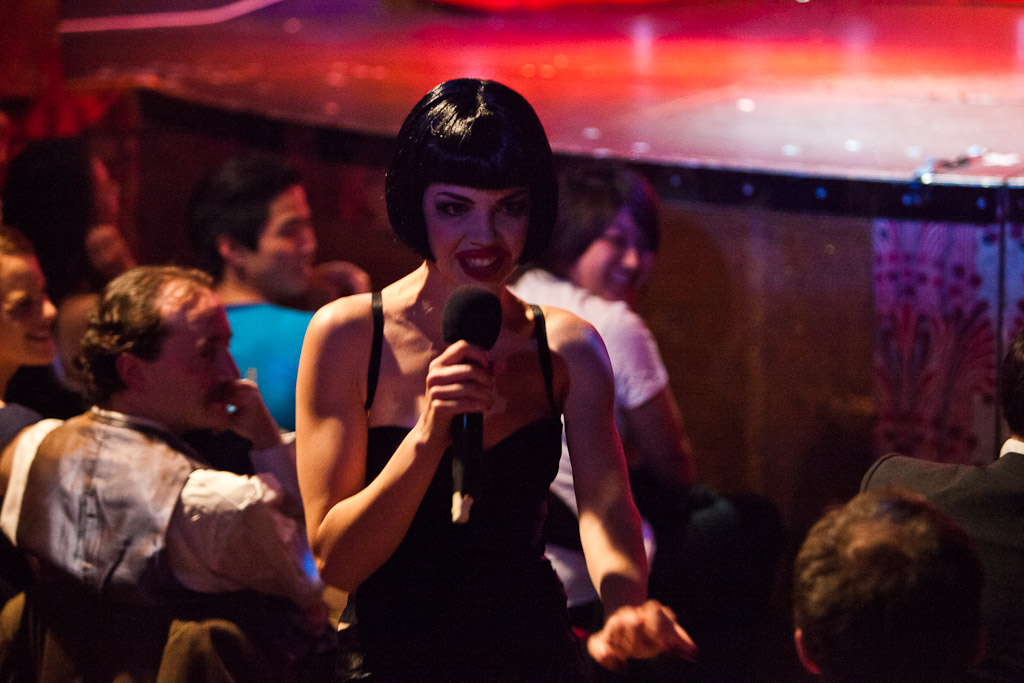 Laurie Hagen is an artist, but you can look at her tits

Other songbirds in the bill explored different shades of musical comedy. In addition to a thrilling Michael Jackson impression, the multi-talented Laurie Hagen went on a lipstick-smearing psychotic spree while belting Morphine’s You’re an Artist (an excellent commissioned act enjoying a much-deserved extended shelf life, originally conceived for a private industry function almost exactly a year ago where I was fortunate enough to see its debut).

Decadent crooner demigod Dusty Limits got at least one audience member wet with a sing- along to Divine’s You Think You’re a Man (and a glass of water), also fiddling his way through the audience to the tune of Whatever Lola Wants. Joining Ms. Hagen in the roster of singing burlesquers was the award-winning Kiki Kaboom with the escalating double entendres of Connie Vannett’s The Pussycat Song. Let no one say Bête Noire couldn’t do subtle. 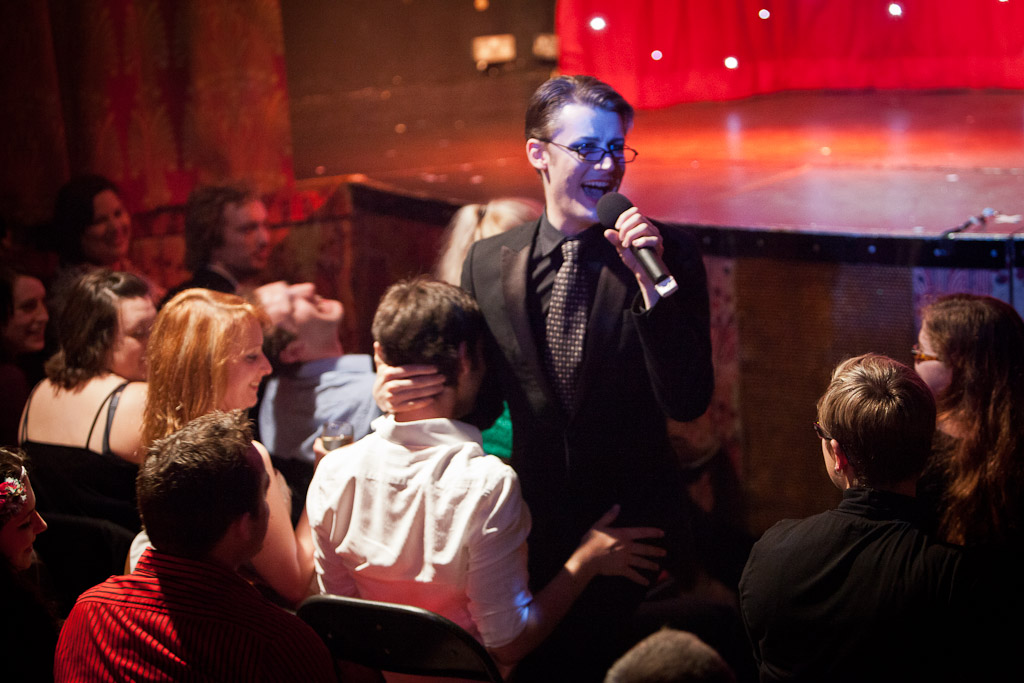 The show had, in fact, experimented with different degrees of subtlety and outrageousness in a highly innovative format. From January 12th, 2012, Bête Noire was presented every week as two shows: La Belle, featuring more mainstream servings of magic, circus and cheesecake burlesque, and La Bête, billed as “A dark and sensual journey into the twisted side of cabaret.” Patrons could buy tickets to either show and, with a combined discount deal to see both bills, often hung around to lap up a three-hour variety behemoth for an admission price cheaper than many of the most established shows with half as many acts.

Experimentation was an early element in the mix, from its beginnings at Last Days of Decadence. Back then, engagements consisted of guest live bands with an opening set of cabaret and burlesque acts, and played largely to a crowd of vintage enthusiasts who were there primarily to dance. Rockabilly, soul and hot jazz ensembles that graced Bête Noire’s first steps included Manouche (soon to become a hot ticket in London’s alternative scene with their lively gypsy jazz), Jarmean? and Beth and The Black Cat Bones, the last headlining band.

A frequent treat in the musical bill was The Stillhouse Orchestra, the country and bluegrass duo of Tia Maria Cork and Jake Evans. A polymath in his own right, Evans also doubles up as DJ Lucifer Box, as well as being the producer of Bête Noire. A regular collaborator with 33 Events on La Rêve, Steamboat Bordello and other top shows of London’s variety scene, the entrepreneur adds a vintage, Americana-tinted flair to many of his projects, but never looks back. “Bête Noire is not closing for good,” says Evans. “We’ll be taking a sabbatical until we figure out what to do next with it. Meanwhile, we’re looking at bringing back Steamboat Bordello this summer, so there’s plenty going on.”

Bête Noire benefited from Madame Jojo’s unique location, central enough to be at the crossroads of the scene, but still far from the tourist trail and its perennial risk of commercial gentrification. If the venue and its shows have resisted the lowest-common-denominator draw of  mainstream entertainment, it was in no small part because of the solidly gay district in which it stands. LGBT audiences, however, remained a small part of the beast’s public.

“Gays seem to come in throngs to Madame Jojo’s only for Trannyshack,” says Ophelia Bitz, mindful of the traditional hit club night that dominates the venue every Wednesday. “Still, we’ve had the most diverse audience I’ve ever seen in cabaret, far beyond the white middle-class masses that are still the norm in the genre. People from different backgrounds heckle differently, laugh differently. Compèring Bête Noire has certainly made me a better performer.”

From Risqué to Risky

Did you know Madame Jojo’s has a full nudity licence? The Bête Noire crew certainly does, and they’re not afraid to use it. Gracing the final show were Kiki Kaboom’s petit funbags, not in one, but two segments: the hilarious chav act, where the bombshell all but scares the audience with rowdy provocations, and a knock-out countdown routine with sizzling go-go moves to the hard-rocking sound of Warrant’s Sweet Cherry Pie. 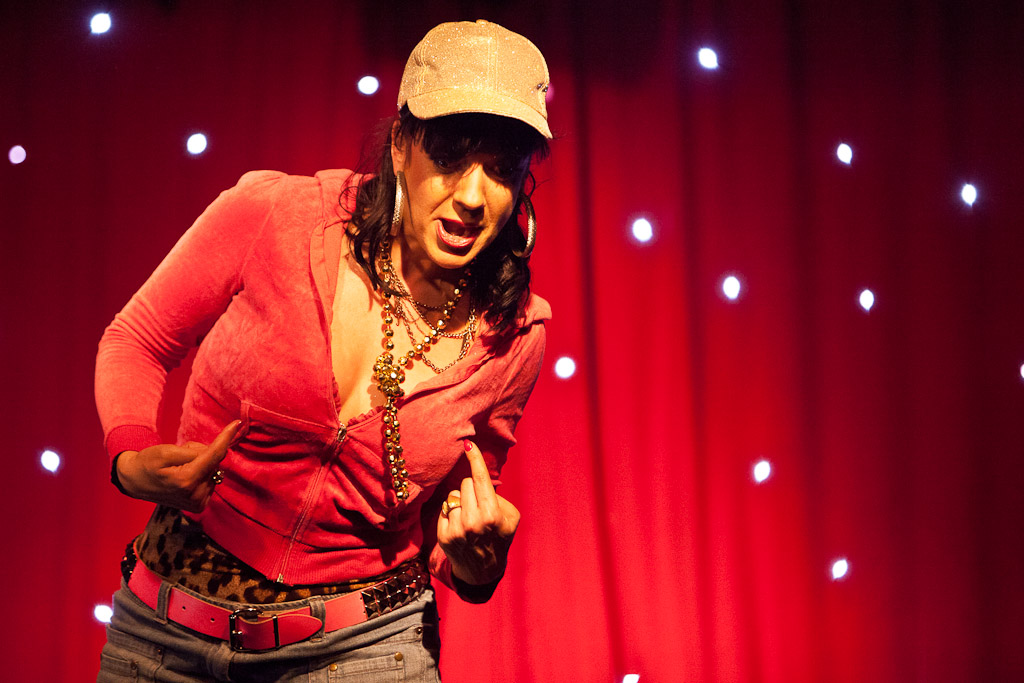 Days before her triumph at this year’s Milan Burlesque Awards, headliner Luna Rosa also contributed two acts of her own, both fine examples of her spellbinding brand of exotic dancing. For the final one, the skilled temptress surprised an already overexcited crowd with a full frontal reveal, teasingly obscuring her entrancing curves with nothing but the thinnest of veils. I’m positive there was howling.

She will be one of those missing Bête Noire: “Just a couple of London shows come close to how much I have loved performing on this show. It is not just a show, it is ‘la famille’ and I am so happy I was part of it. So, while the beast goes into slumber, I know that the master Jacob Evans will be cultivating the next round of shows that bring such great people together and will produce something mesmerisingly splendid.”

If the second of the two shows was meant for darker numbers, there could hardly have been a more fitting routine than the latest creation by performance troupe Late Night Shop. The quartet offered a sinister, utterly absorbing human puppeteering skit with striking moves, clever narrative and heart-racing spectacle. Complete with jarring electronic soundtrack and ominous lighting, the bit wouldn’t be out of place at nightmarish revue The Double R Club.

Bespoke pieces from the group enriched the show since they began a residency in late January, two weeks after the beauty-beast split. “I can only describe it as magic,” says troupe member Miss Apple Tart. “Jake invited us and gave us free rein. We decided to come up with a new act every week.” The impact of such a hectic creative regime on the group’s output is evident in their sharp delivery. Departing from the cheesecake burlesque focus of most UK-based professional troupes with their expanding range and eclectic technique, The Late Night Shop is definitely one to watch. 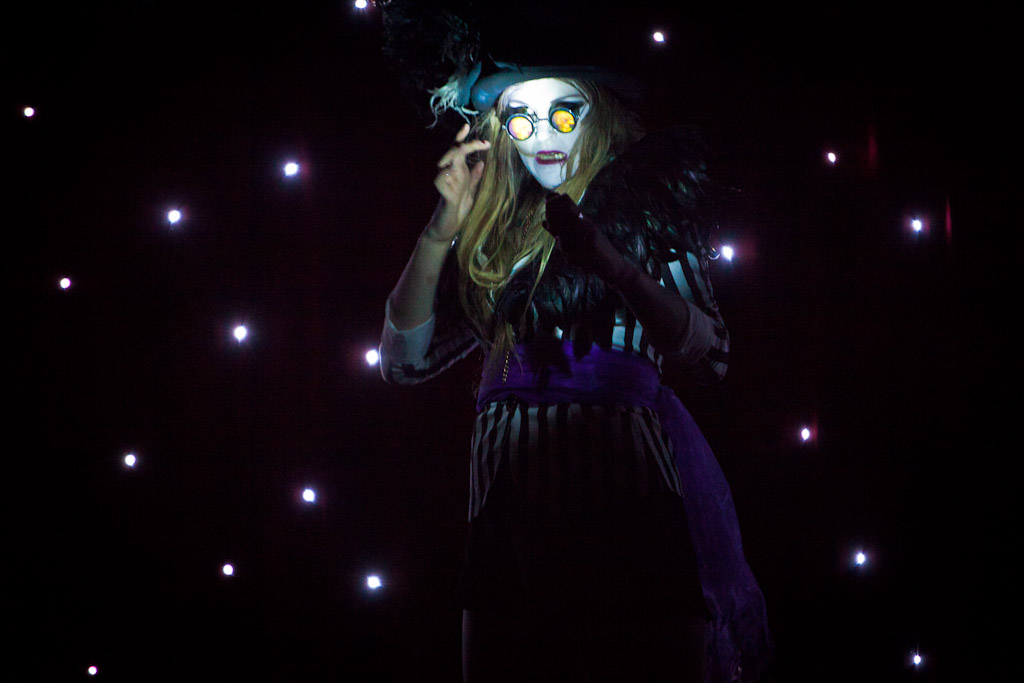 The Late Night Shop: black magic for a black beast

Between Count Adriano Fettucini and Count Ricardo Bolloloco’s literally electric fan dance and Leah Debrincat’s belly-dancing exploits, the final Bête Noire was a memorable affair. Disparate voices shot from the audience to volunteer for moments of participation, erupting in cheer with every punch line, every reveal, and even more when Mat Ricardo dropped the wine glass in his celebrated cigar-box-balancing act – a rare occasion, perhaps due to motor side effects from the first set, when magician Laura London turned him into a goldfish.

But now the curtains are down. There’s no telling what will replace the show in Madame Jojo’s coveted Thursday schedule, or what the beast with two backs will look like upon its return. Like Whoopee, Tournament of Tease and Boom Boom Club at the Bathhouse before it, Bête Noire has now joined the ranks of history. One can only hope it will repeat itself.