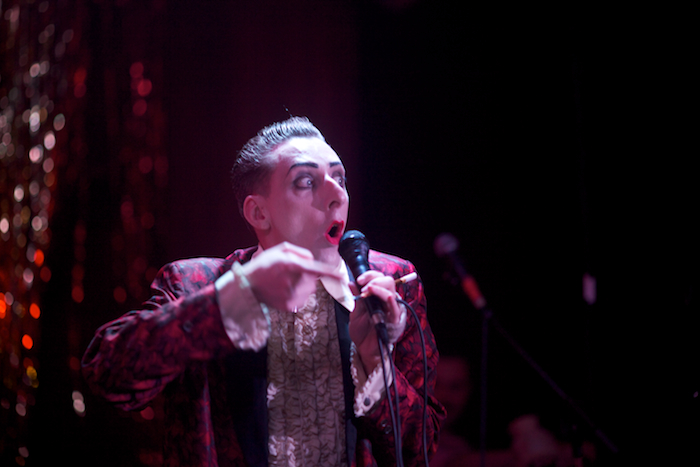 Lurid and ominous, The Double R Club has scarred the face of London variety since 2009 with a unique style of cabaret and burlesque inspired by the films of David Lynch. When the lights grow dim and the smoke machine kicks in at the Bethnal Green Working Men’s Club, shameless humour and nightmarish performance come together in an irresistible symbiosis of shock and wonder. 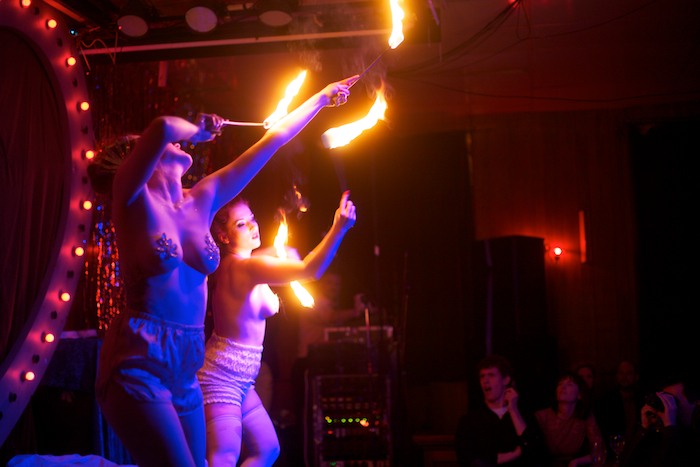 The tone is consistent, yet unpredictable: some of the acts, often tailored especially for the show, are parodies or creative re-enactments of memorable scenes in the Lynchian canon; others take no more than a hint from the director’s dark oeuvre, presenting unsettling or deranged numbers echoing that whiff of eeriness and perversion that characterizes his work.

In one moment, burlesque dancers Missy Fatale and Billie Rae team up in a conjoint twin number that sees the two belles teasing each other with fire-juggling torches. In another, circus performer Lydia Darling takes to the stage with arms immobilized by tightly laced hypodermic needles and re-imagines a phantom Laura Palmer to dance with her maniacal father from Twin Peaks. 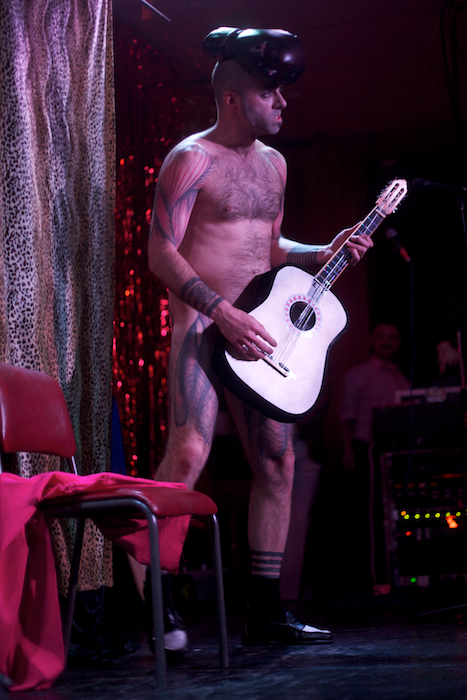 Johnny Electrolux brings the King back from the dead

Yes, real needles, on real skin: no other variety show in London pushes the boundaries of what’s acceptable in live entertainment like The Double R Club, so be prepared to witness morbid and ghoulish exploits, of the kind people both grimace and gawk at. Literal freak Mat Fraser, a recurring performer in the revue, often leaves behind a trail of blood and other bodily fluids (some of them fake) after elaborate displays of psychotic debauchery. A fine example is his mock-rape double act with burlesquer Trixie Malicious, a maelstrom of beastly shrieks and flailing prosthetics to the tune of a raspily sung Born Free. His pieces bristle with stunning theatricality and unashamed carnality. There is never a single dull moment when Fraser is onstage.

But the Club is not just about graphic horrors. Irreverent jest is the mark of acts like comic magician Johnny Electrolux, who indulges in costume changes and a seemingly inexhaustible suitcase of tricks to bring a levitating Elvis Presley back from the dead. Likewise, the show often welcomes crooners to contribute musical numbers in different styles. Liberty Pink channels the abandon of old-school cabaret with cuts like Kurt Weill’s Surabaya Johnny, delivered with Wagnerian verve while she pilfers drinks from the audience. The operatic Michele Moran, in turn, visits a more contemporary cabaret songbook with William Bolcom’s Song of Black Max, given the Double R treatment by an arrangement of dissonant voices that enhances the singer’s moving, crisp performance. 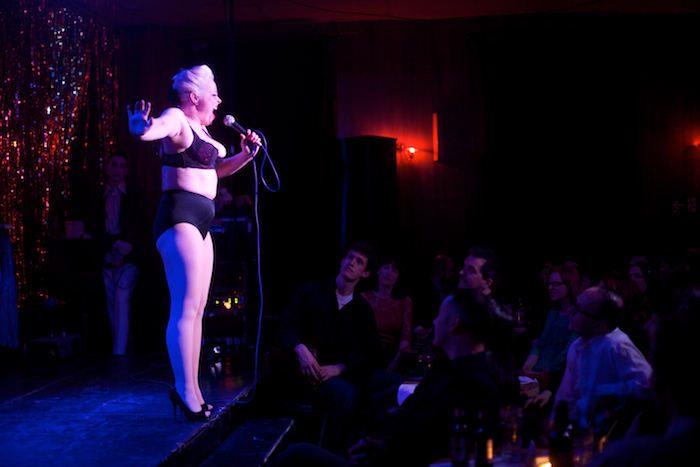 Watching The Double R Club is a fully immersive experience. Its customary range of intriguing routines is rendered even more engaging by the atmosphere that surrounds them. Upon entrance, patrons receive a programme listing the running order of the bill, complete with sensational descriptions that could have been yelled by a circus ringmaster. You will also receive a playing card, which may be exchanged for a shot of coffee liqueur at the merchandise table (where you can buy everything from hand-knitted Agent Cooper doughnut key rings to coffee mugs). Once in the venue’s red-carpeted, wood-panelled room, you may find a seat at one of the highly sought-after candle-lit tables by the stage (reservations are available), or join the standing crowds by the bar. Never have a show and a venue made a better match: oozing ambience with its run-down, low-brow kitsch décor, the Bethnal Green Working Men’s Club could easily be mistaken for the smoky Middle America saloons and dance halls where the characters from Twin Peaks or Wild at Heart lurk. 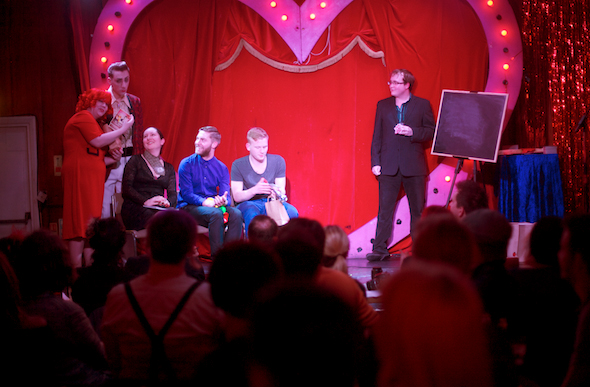 Fun and games: patrons compete for prizes at The Double R Club

And then there’s Ben. Suave like a drug bust gone wrong on the interstate, compère Benjamin Louche spurs the audience to loud bursts of euphoria with banter both passionate and studied. He opens every show with the same ritual, a recreation of the Roy Orbison lip-synch scene protagonized by his namesake from Blue Velvet, complete with the inspection lamp, but always to a different song. At the end of the first half, he runs a (usually) brief game show skit with the show’s co-producer, burlesque dancer Miss Rose Thorne. Audience members are then subjected to Lynchian twists on the rainy-day classics of your childhood – ready for a round of “Twin-Peaktionary”? Prizes include film DVDs, cans of genuine garmonbozia (Google it) and even autographed Twin Peaks memorabilia.

He sings. He swoons. He paso dobles. But it’s in his mid-act banter that he offers his greatest contribution to the show. With astonishing improvisational skills, Louche launches into unflinching tirades of escalating absurdity. From a simple faux-philosophical premise like “are you really you?” or “where do your dreams come from?” he free-associates his way through eschatological collages of rambling insanity. Amazed at the endless torrent of grotesque images that surface from the host’s fevered imagination, the crowd erupts with laughter. This is where cabaret compèring blurs into mesmerising performance poetry. Watching Louche talk the talk is one of the most absorbing experiences you could have by a stage without breaking health and safety regulations.

Benjamin Louche’s feverish ravings are a thing of beauty

The Double R Club puts a fresh spin on the modern cabaret formula with shows both admirably diverse and imprinted with a clear personality. It is certainly not for the squeamish: a spellbinding carnival of tongue-in-cheek gruesomeness and harrowing performance, it defies genres and taboos with unapologetic intensity. But even if backwards-talking midgets and somatised psychogenic fugues are not your cup of tea, it’s worth a gamble. Pulse-racing entertainment like this is never found within the tight constraints of good taste.