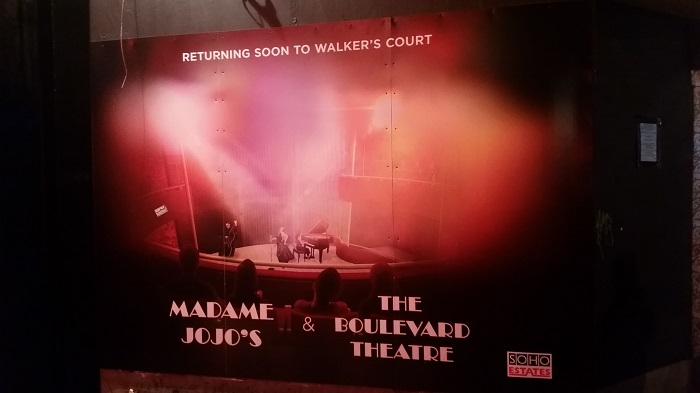 According to a new poster adorning the site of Madame Jojo’s, the Brewer Street cabaret joint is “returning soon”.

The closure of the historic Soho venue Madame Jojo’s last November was both unexpected and sudden. What started as a night of extreme violence ended up with a summary execution at the hands of Westminster Council and a number of shows looking for new homes.

Soho Estates, the owners of the Walkers Court building which housed the burlesque haunt, was the target of much ire, especially when it was revealed that, regardless of the council’s decision, they were planning to close the venue anyway as part of already-approved development plans opposed by English Heritage, Soho Society and the English Collective of Prostitutes. Soon after the doors were locked for the final time made, a “vigil” attended by the cabaret community made a point of protesting against the company – the only place that the march stopped along its route was at their offices.

There was more than an element of backpedalling in Soho Estates’ statement soon after. According to CEO John James, Madame Jojo’s was not dead but merely sleeping: “performers will be welcomed back at the new improved Jojo’s in a couple of years’ time.” James didn’t help matters when, while being interviewed by the BBC, he flew in the face of public opinion by denying that gentrification played any part in what was happening around Soho. Instead, the man in charge of turning one of the red light district’s most famous nightspots into a glass-fronted building designed for office, retail and residential use put his upcoming development down to “dynamic change“.

Is the new poster another example of Soho Estates spin? That they have repeated the message that Madame Jojo’s will eventually come back can only be good news. A hasty press release is one thing, a six-foot high poster in public view is another. What form it will come back in, though, is another question. Tellingly, the only cabaret venue on the block that they wanted to keep throughout the redevelopment was not Jojo’s but its upmarket neighbour The Box. The brassy import from New York arguably has the edge over the shabby-chic icon in terms of performer quality but it is neither a cheap nor inclusive experience: short of having celebrity connections or a few thousand pounds to spend on a table, it is a difficult place to get into. Even those with a press pass will have severe problems gaining entry, perhaps due to the salacious spoilers, unauthorised photography and unfounded rumours of its demise published by the Evening Standard and Daily Mail.

And what about the Boulevard Theatre mentioned in the poster? The proposed 120-seat performance space is the brainchild of Paul Raymond’s millionaire daughter Fawn James. Just after the incident at Jojo’s, she spoke about her vision of the Walkers Court block, telling a journalist that “everything around it will become foodie, community-minded and family-friendly, round-the-clock instead of nocturnal”. She went on to say “Soho started out with a lot of tailors, then it went to sex. It hasn’t completely moved on from that, but online access means people don’t have to go into shops to buy things and whatnot.”

The trained actress  has mixed plans for the Boulevard Theatre which in its original life helped launch the careers of Adrian Edmondson, Dawn French and Eddie Izzard. James sees a blend of stage productions, variety shows and daytime events, saying “things could happen at lunchtime, that schools could use, then a play at 7.30 and cabaret afterwards”. How and when these plans will come to fruition are currently unknown. What the return of Madame Jojo’s will mean to much-loved shows like Cabaret Roulette and Finger In The Pie – both of which have since relocated across town to the Royal Vauxhall Tavern – is also unknown. Watch this space.