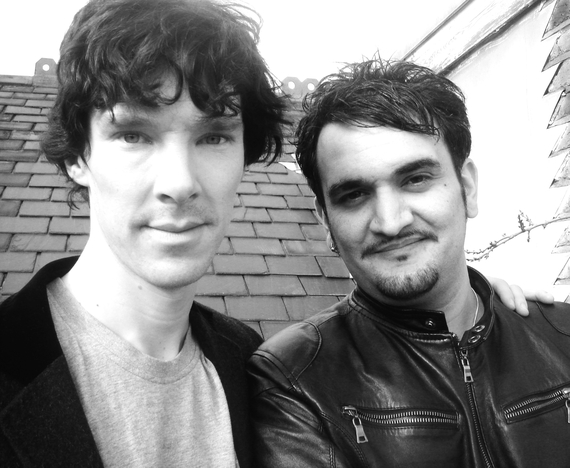 Although there was a funereal air to last Saturday’s Madame Jojo’s march, there’s life yet in the campaign to stop equally injurious closures in Soho.

An open letter has been penned by Tim Arnold (aka the Soho Hobo) and sent today to London Mayor Boris Johnson. Arnold spoke to us about his motives behind this latest move, saying “the focus of my campaign is not the closure of Madame Jo Jo’s. The focus of my campaign is to engage the mayor into becoming proactive in all future developments in the area if those developments threaten any more Soho institutions.”

The letter has been co-signed by some rather well-known names. Sherlock and Star Trek star Benedict Cumberbatch has joined Arnold’s campaign, as have Stephen Fry. Eddie Izzard and The Who’s Roger Daltrey and Pete Townshend.

Arnold has two direct questions for the Mayor:

This is the full text of the singer’s message to Bojo.

With great urgency, I am writing to you as a Soho resident on behalf of the Soho community and the performing arts community of the West End.

As outlined by Alex Proud in the press this week:

“Due to an unfortunate incident, the world renowned entertainment venue Madame Jo Jo’s in Soho has been closed. This sorry tale started in late October when there was a violent altercation between the club’s bouncers and a customer. It was pretty nasty and neither side comes out of it well. The police report into the incident recommended the club’s licence be suspended. Fair enough.

In the interim, the club changed its manager and selected a team of bouncers that Westminster council had approved. You’d think this would be the end of it. But no. Last week Jo Jo’s, which has been trading under its current name since the 1960s, had its licence permanently revoked and half a century of Soho history ended.”

The demolition of Madame Jo Jo’s has now been approved by Westminster council and Soho Estates are set to carry out their redevelopment plans without even allowing one last performance at the club.

I am a local resident and performer. I have lived and performed in Soho for 20 years, as did my mother before me and my grandfather before her. A large part of my work as a songwriter has been devoted to the preservation of Soho’s history and it’s enduring character. Given my passion and love for Soho, and it’s future, it would be improper for me not to ask for your support.

If every Soho establishment that suffered an incident similar to this had their license permanently revoked, countless establishments would close and the character and charm of the area that has attracted a global audience for more than half a century would soon disappear from the heart of our city. The removal of Madame Jo Jo’s also makes it open season for further removal of small independent establishments in Soho, a horrifying thought for anyone who supports Soho’s 400 year old legacy as a fertile ground for innovation and creation. In addition, Madame Jo Jo’s has long been an important platform for emerging artists. Everyone from Adam Ant to Adele has performed there, not to mention the stars of tomorrow whose talent and craft have been nurtured in small venues like Jo Jo’s.

The british music industry is one of our largest exports. Some of the biggest acts in the world began their careers by performing in small venues in Soho. The Who, The Kinks, Spandau Ballet, The Animals, The Sex Pistols and Oasis to name but a few. If venues like this continue to be removed from our precious landscape, where will the British musical exports of tomorrow be able to showcase their talent and skill to the British music industry? An industry that is largely based in central London.

There are two questions that I would deeply appreciate your response to:

As I write this, I look out of my window on Frith St which oversees the legendary jazz venue Ronnie Scott’s. Ronnie Scott’s is a benchmark for Soho institutions that have been operating successfully for over 50 years. Next door from me is a blue plaque remembering the tenancy of one Wolfgang Amadeus Mozart. Soho’s enduring attraction as a global destination has always depended on building around and adding to what has gone before. Not by removing it. Not by demolishing it.

My cosignatories and I look forward to your response.

For those not on the above list, you can still make your voice heard: two petitions have been set up here and here.