Official: Madame Jojo’s Will Re-Open…In A Couple Of Years 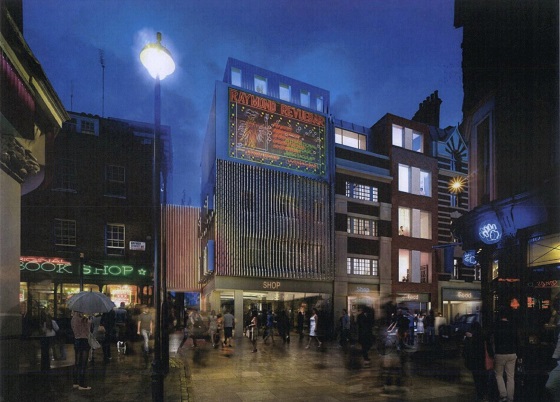 The Madame Jojo’s bandwagon rolls on with fresh developments every day it seems.

This morning, performers union Equity announced today that it had noticed a nightclub-shaped barn door that could do with some shutting and written to Westminster Council saying how strongly they felt about the closure of Madame Jojo’s. Equity’s General Secretary Christine Payne secured her place aboard the publicity bandwagon with some obvious points which could perhaps have been of more pertinence before the council made their minds up more than two weeks ago.

Of more relevance is a statement from Soho Estates, owners of the Brewer Street building in which Madame Jojo’s resides. Their plans to redevelop the Walker’s Court area have been well-documented but they have kept relatively shtum on what exactly it has planned for the famous burlesque joint.

While recognising the short-term difficulties in re-opening Madame Jojo’s, the company founded by Paul Raymond points towards a sunny day some two years away saying that “whilst we can’t reopen the existing premises without a licence, performers will be welcomed back at the new improved Jojo’s in a couple of years’ time.”

As well as The Box, there are also plans for a third performance space as part of the redevelopments. The revival of the 120-seat Boulevard Theatre is the brainchild of budding actress Fawn James, Raymond’s granddaughter and co-inheritor of his vast estate. Hints last year suggested that the theatre will be there to showcase up-and-coming young playwrights and directors but the latest statement refers to it as a “new cabaret space“. Hope springs eternal.

“At Soho Estates we recognise the rich and creative history of Soho and the importance of venues such as Madame Jojo’s.  Indeed, the idea and concept of Jojo’s came from Paul Raymond, the founder of Soho Estates, who first opened it in 1987.

“We will be making much-needed improvements to buildings in Walker’s Court and the surrounding area, but far from taking away venues, we have been granted licences for two clubs within the regenerated development.

“One of these we expect to be The Box and the other we intend to be a re-incarnation of Madame Jojo’s.  Whilst we can’t reopen the existing premises without a licence, performers will be welcomed back at the new improved Jojo’s in a couple of years’ time.

“Our plans also include a third creative venue, the resurrection of the famous Boulevard Theatre.  This was the home of the original Comic Strip comedy show, which started the careers of the likes of Adrian Edmondson, Dawn French, Eddy Izzard and countless others.  We hope that this new cabaret space will similarly provide a venue for new and emerging talents so that Walker’s Court continues to be at the heart of London’s creative industry.

“The management team understands the ‘village’ in which we operate and reacts accordingly. We understand the requirements of our tenants and have helped in times of recession to maintain their cash flow and keep the small businesses of Soho thriving, whilst also helping some businesses to grow into major concerns.

“The Company has long term views and does not fear the short term changes in the market place. “