Circus Treats: What’s On in October 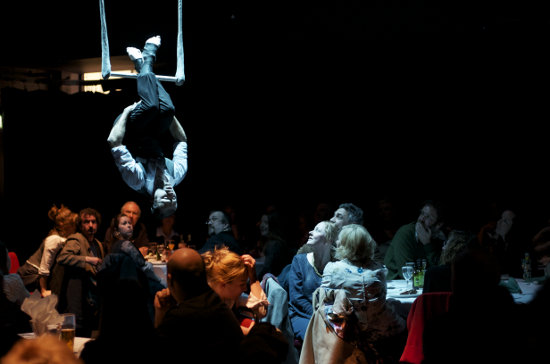 Another month, another wish list of circusy stuff to see up and down the country…

Beginning in Bristol, Circomedia students’ Graduation Showcase takes place on 2-3rd of this month and the school will also be hosting the next VOLT Circus Scratch night on the 9th.  What’s more, following the launch of their BA Honours Degree programme this semester, the first wave of third years will be popping up to London to show us what they can do in Ten Degrees South West at Jacksons Lane on 24th.

That Highgate hotbed of circus innovation also presents their own new show The Party this month, running from 28th October-1st November.

Other London staples include the latest circus infused cabaret at Cafe De Paris, Cabaret des Distractions, playing with a fixed line-up every Friday night.  Or, if you prefer a bill that changes weekly, check out the performances at the Aeronaut circus-pub in Acton on Friday’s and Saturdays.

As the Raindance Film Festival draws to a close this weekend there’s still time to catch our circus favourite, Grazing The Sky, and Sadlers Wells houses the “7 Fingers” for another few days until the 4th.

Later on in the month, several of the big-hitting big tops of the UK seem to be finishing their seasons in the capital, with Zippos in Wembley 2-7th, then moving on to Hampstead Heath from 9-14th.  Then, from the 22nd, we see the Moscow State Circus coming to Clapham Common (until 2nd November), Continental Circus Berlin appearing on Blackheath Common (until 30th), and Billy Smart’s Circus visiting Ealing (until 2nd November).

Elsewhere around the country other tents are still touring, and you can see if any are coming near you by checking the list here.

October is the last full month of Blackpool Tower Circus‘ Mooky Goes To Hollywood, which runs until 9th November, while the other grand dame of UK circus buildings, the Great Yarmouth Hippodrome, will be presenting its Halloween Spooktacular from 25th October-2nd November.  Moving from the old architecture of these historical sites to the New Theatre, Cardiff, we find Cirque Du Hilarious appearing for one night only on 27th, before returning to Butlins where they can usually be found.

Welsh founded troupe Crashmat Collective are on tour again this month with the dining and danger of Façade, and Birmingham based RoguePlay are on the road with their circus flavoured production of Blood Wedding.  Production team Crying Out Loud also have several shows on tour this month, including Cie Kiaï from France with the thoughtful trampolining of Off, the darling plastic bag juggling of Cie Non Nova in L’Aprés Midi d’Un Foehn Verion 1, and the airborne antics of Pirates of The Carabina‘s Flown.

Flown is also one of the circus productions showing at Canterbury Festival this year.  The festival runs from 18th October-1st November, and is your chance to see the European premiere of Casus‘ new show Finding The Silence, as well as their family friendly Tolu, and founder member Emma Serjeant‘s solo Jerk.  Then there’s gentleman juggler Mat Ricardo‘s Showman.  And Cirque Du Cabaret…

Could this be a case of too much circus, not enough time?  Squeeze in what you can folks, while you can!  And if it’s not enough, then slip in some nouveau ice-dance with Le Patin Libre, who are at Alexandra Palace with the world premiere of Vertical Influences (28-31st), the world’s first full length contemporary ice-skating production.

As ever, if there’s more we’ve missed, please feed it in to the comments below.