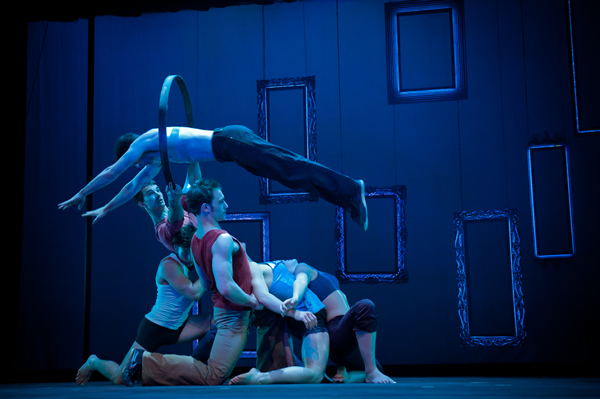 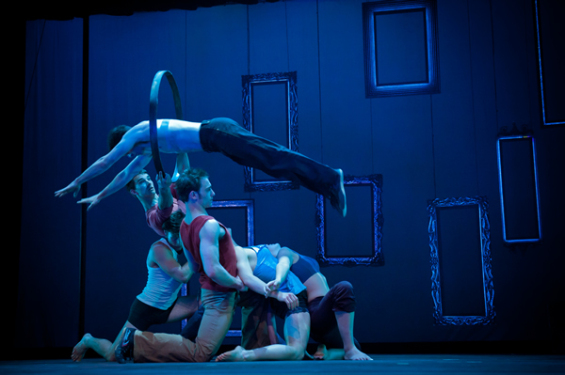 Séquence 8 continues at the Peacock Theatre until 4 October.

This limited run of Séquence 8, the latest creation of Québec company The 7 Fingers (Les 7 Doigts de la Main), fizzles with danger and beauty. Seeing this show at Sadler’s Wells Peacock Theatre, I was reminded of a moment when Aaron Sparks talks about modern circus terminology in their show Circus Geeks, when seeing something particularly existential and conceptual is known as “French” – the opposite in many ways of “Russian” which is interpreted as clean, classic and technical in a traditional way. Séquence 8 is a very French show in this regard with performers using props in novel ways often to explore their potential, while the piece as a whole “contemplates the role of the ‘other’ and how we see ourselves through and against it.”

That’s a very abstract idea to build a show on, and at first there’s a risk of it falling into pretension. Happily Séquence 8 always stays on the right side of this line, mostly due to the light humour and astonishing skill level, plus the very real physical risks the performers undertake. Some circus shows try to look dangerous, others really are dangerous and only manage to hold together by landing within a tiny margin of error. This show is definitely the latter, a sad testament to this being the injury of one of the cast three days earlier. Congratulations go to Pablo Valarcher who learned the entire show in such short time to replace Ugo Dario.

There are many moments of the show that hits that special place where your heart rate rises and you see the floor rushing towards the performer and you hope they will live through the next few minutes. Devin Henderson‘s plummet from the top of the chinese pole to within centimetres of the floor, hands behind his back, shows a level of confidence that is truly death-defying.

There are some stand out sections of the show. Eric Bates’s cigar box piece ranks as among the most creative expressions of juggling I’ve ever seen, live or on video. Both on his own and while passing with five other members of the cast, this is seriously good. Elsewhere, Alexandra Royer shines on the Russian beams and aerial hoop. Despite this, the show is very much an ensemble piece, with great emphasis on choreography and group work and is particularly successful because of how well the eight performers work together throughout.

Séquence 8 is incredibly quirky and for a show with such serious sounding aims, it really doesn’t take itself too seriously. Instead, this is a show that is undoubtedly, unashamedly different and celebrates the individual. Here is a fine example of how contemporary circus can uplift and make you happy, it exists and through that, the world is a more amazing place. The last performance is October 4th and for all circus fans in the UK this is a must-see.