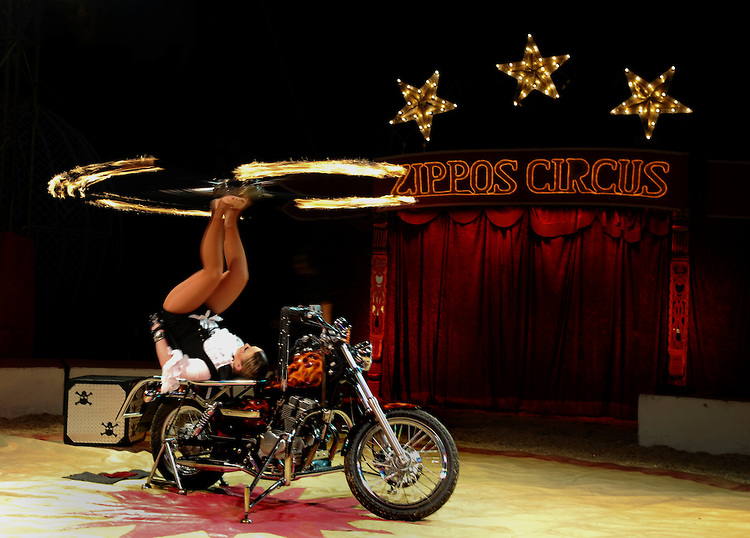 While the capital focuses their circus eyes on the Roundhouse this month, elsewhere in the country the traditional tenting season has begun.  Last week we caught one of the most famous names in UK circus, Billy Smart’s. 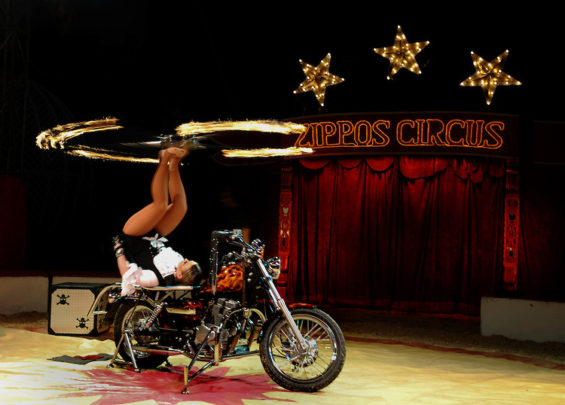 This year’s tour sees the return of Yasmine Smart, grand-daughter of founder Billy – or “The Governor” – to the role of ringmaster, in a show that embraces both the historic past and modern tastes.  The original Billy Smart’s Circus ran for 25 years until 1971, and then continued to provide regular holiday broadcasts for the BBC, and later ITV, until 1983.  Now under the leadership of impresario Tony Hopkins, they are back on the road for 2014, with an excellent variety of highly skilled acts.

Keeping with many of the traditional circus visuals that fans may expect – red velvet, spangles and sawdust – the big top show also uses multimedia technology to draw us 21st Century technophiles into their world.  Clown Jonny Bogino wears subtle make-up and dress that allows us to connect to his gentle humanity, and provides playful transitions between the mostly aerial and acrobatic acts raising our pulses and stopping our breath. Special mention goes out to the live orchestra, who bring an atmospheric buzz to the ring, and manage to time their playing perfectly to the onstage performers.

Highlights for me are the exuberant Flying Aces from Australia, who present a joyful Happy Days-inspired trampoline act as well as their flying trapeze (which includes the novel use of a Russian swing to launch one of their flyers).  The five acrobats bring the ring to life with their energy and charisma.

The superb rock and roll foot juggling of Germaine Delbosq is fast-paced and unusual, as is her second appearance with partner Indian Spirit for a whirling percussive display of Argentinian bolas.

Nothing in the show drags, and the final act from the Romanian X-Treme Brothers trio is the icing on the cake, as their muscular bodies demonstrate incredible control in an adagio hand-balance routine atop a tiny metal platform.  This may be family entertainment, but good circus is always sexy too.

As well as the traditional candyfloss and popcorn, visitors can also buy hot snack-food on site to keep hunger pangs at bay, and alcoholic beverages are available.  But don’t drink too many – you’ll want to remember this!