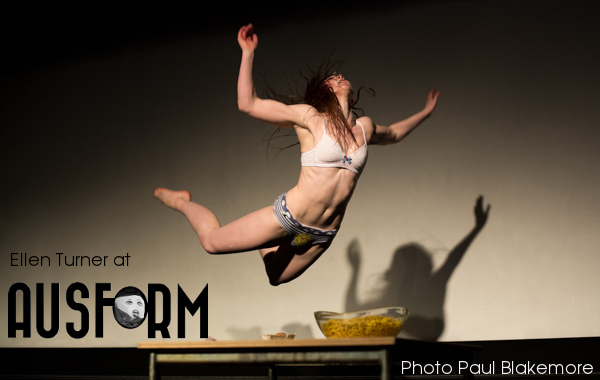 This weekend, the unofficial circus capital of Britain is hosting a unique scratch performance event for circus artists in the process of developing new ideas.  Bristol City Council have granted funding to producers Ausform to strengthen the infrastructure of circus development by working with Circomedia to produce a second VOLT event, following the successful pilot in February. 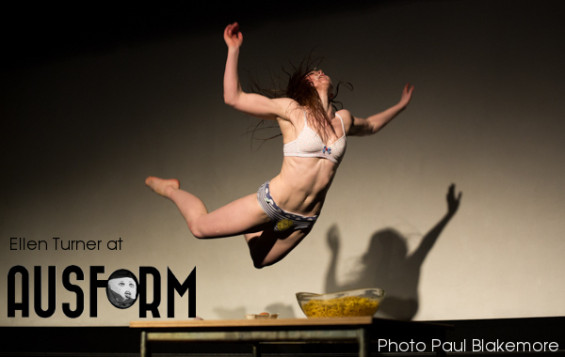 VOLT brings together the makers and the audience, giving viewers an inside look to the early workings and creative process of circus. We spoke to Lina B. Frank, the founding director and lead-producer at Ausform. She will be presenting five new fledgling circus ideas on Friday 4th October, at Circomedia.

The theatre world has been presenting scratch nights for decades, but VOLT seems unique in providing this early platform exclusively for circus artists.  What inspired you to develop this format?

The idea formed because it seemed silly not to have one. It actually took a couple of years to get it off the ground, because it seemed so many people wanted to do it but had different opinions about how or where it should be.  I think I spoke to just about everyone in Bristol about it!  Finally I said, “right!”, put the money on the table, and Circomedia came on board as co-producers.

I also work in the artist development department of Bristol Old Vic Theatre, which means I’ve seen plenty of the impact that scratch nights can have, both the ups and the downs.  For me, there is a real difference between scratch and cabaret (or presenting acts for feedback).  With VOLT we really want to focus on dialogue, and we do everything we can to get the artists and venue thinking about artistic content and process, rather than simply technical elements like lights and rigging.

Yes. I’m interested in circus that is made by people rather than super-humans, and I believe letting audiences into the process of development facilitates this.  We’ve decided that we will change the format of audience feedback with each event; last time we played with getting a visual representation of opinion by inviting the audience to come on stage and move around in response to particular questions about the work.  Because we were slightly overwhelmed with how many people turned up, it all took a long time and so, this Friday, we’re trying something very different!

Were you surprised by the response to the pilot event in February?

I was kind of blown away by the response first time around!  With Ausform, atmosphere is key to everything we do.  It’s really important to us that audience, artists, and volunteers all feel comfortable and feel like they can be, think and speak like themselves.  I’m very grateful for my super-hero team at Ausform, and am really chuffed to have found such good collaborators in Circomedia; they provide invaluable experience and a strong personality to this process. The event itself is a great compliment to the Circomedia training programmes, and their space is divine as we can pretty much rig anything there. That opens up the possibility to offer scratch to someone who does anything from Korean cradle to swinging hoop, in a way not every space can.

What experiments should we hope to see on Friday? 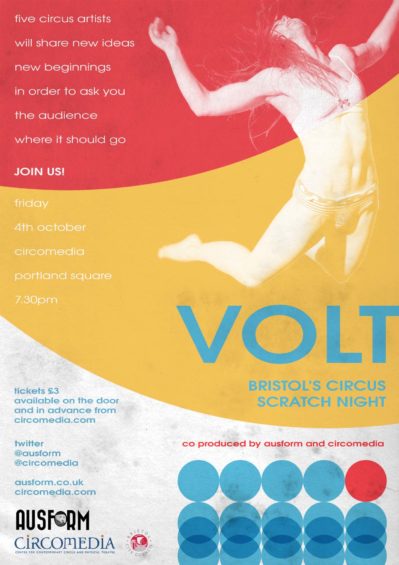 Mike Bell of ‘The Play People’, will be introducing an unlikely character to the stage and trying out some new ideas with juggling, clown and a man’s best friend. Helina Griffiths and her aerial partner Janine Elizabeth Mahon will be developing new dimensional work on a rotating hoop, exploring how physical differences can be used as creative advantages, and recent Circomedia graduates Willow Vidal-Hall and Grania Pickard will be scratching a section of their full length show as ‘everyday feminists’. Steve Ryan will playfully examine the mythology and lost historical impact of the circus, using clown, movement, text, and ‘like, maybe a handstand’; and, finally, fresh from his tour with NoFit State’s Bianco, Hugo Maciel of Cie Huma will be sharing some new lyrical juggling and theatre ideas. (Previously billed as Hugo Oliveira. Ed.)

And what’s next for VOLT?

I’m interested in following up the progress of artists and ideas after they have shown with us, but I’m also currently thinking about what VOLT on tour would look like.  If anyone is thinking, ‘why don’t we have this in our city?!’, they should get in touch with me!

Lina can be contacted on lina@ausform.co.uk, or you can catch her in person at VOLT, Friday 4th October at Circomedia, Portland Square, Bristol.  The event starts at 7:30pm, and tickets are £3. For more information please click here.