The Week in Cabaret: Geek Out with the Audience 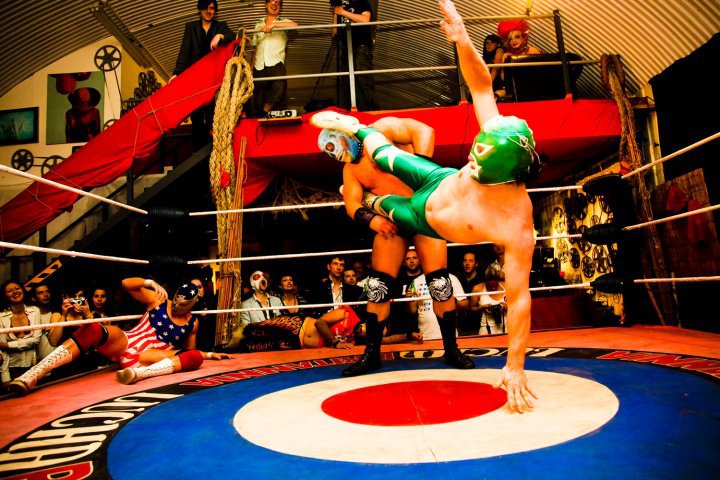 What better way to follow the overdose of the World Burlesque Games than with a conference? BurlyCamp offered workshops and performances from the likes of boylesquer Mister Mistress, The Cheek of It! founder Lady Cheek and performer Rubyyy Jones, aimed at enthusiasts and dancers, experienced or not. Organized by burlesquer Miss Lolly Pops and events manager Purr von Kitty, the inaugural weekend took place at Hoxton Hall, sponsored by Vivien of Holloway, What Katie Did and Dupenny, among others.

Get ready to rumble: Lucha Britannia at the Resistance Gallery

If cabaret is about audience participation, it’s hard to beat Lucha Britannia. Go to one of their monthly shows and you’ll risk being yelled at, grabbed by your collar and having a 30-stone masked wrestler thrown your way – they really fly over the ropes and out of the ring. Even the burlesquers who perform between matches get into the confrontational mood: last Friday Missa Blue sprinkled herself with hot candle wax mid-striptease, only to spit bits of it into the public. In true cabaret fashion, the spectators in the crowded Resistance Gallery fight back, booing wrestlers and clamouring in unison for violent punishment – “squish the fish!” hears El Pirano, minutes before his defeat at the hands of the Fabulous Bakewell Boys. Nevermind that Mexican wrestling is staged: with thrilling choreographed manoeuvres and loud over-the-top satire, Lucha Britannia is even better than the real thing.

Also on Friday, musical comedy duo Bourgeois and Maurice doubled their numbers once more for We Started a Band, their new show as a four-piece rock band. Part of the Priceless London Wonderground festival, it has only one more engagement, on June 28th, in which to hear Ritalin, Out Outfit You, Addicted and other signature numbers backed by guitar and drums. 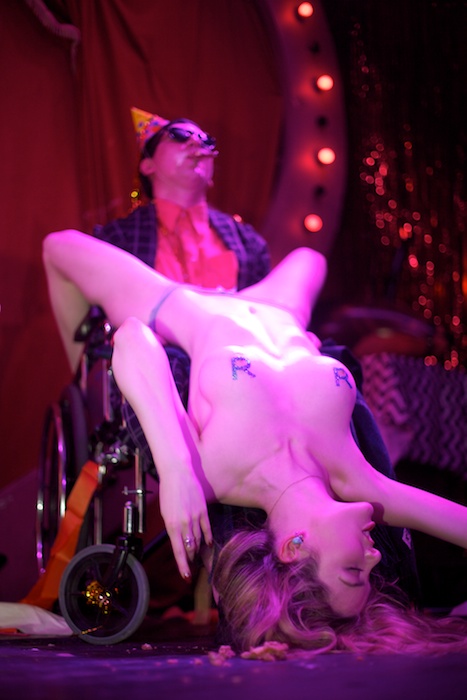 Fancy Chance was in high demand last week. On Thursday, the minute burlesquer reprised her award-winning giant vagina act at The Double R Club as it prepares for the Third Annual Miss Twin Peaks Contest on June 21st. The latest engagement of the grisly revue also featured Miss Miranda and Greasy Tony in a Twin-Peaks-inspired burlesque parody of domestic abuse and live music with storytelling trio Georges Kaplan Presents. On Saturday, she made the day of many a geek as a stripping Lieutenant Uhura from Star Trek, complete with an afro wig and go-go boots. The show was Gypsy Hotel, the monthly offering of “bourbon-soaked snake-charmin’ rock ’n’ roll cabaret” curated by Paul-Ronney Angel (of gypsy-rockabilly ensemble The Urban Voodoo Machine) and headlined by guest brass orchestra Trans-Siberian March Band.

Sunday saw the second edition of Savoy Cabaret, the lavish revue curated and hosted by Holly Penfield and Dusty Limits. Gracing the Savoy Hotel’s Beaufort Bar this time were crystal ball juggler Matt Hennem and Indian dancer Ash Mukherjee, with burlesque from Vicky Butterfly, Laurie Hagen and Miss Apple Tart. Between that and La Rêve on Friday, Dusty Limits managed to squeeze in the première of The Outer Limits, a follow-up to his 2011 solo show Darkling. The irreverent soirée features two guests in every show, in addition to Limits’s own repertoire of darkly comic songs and Weimar standards. Two more dates in June and July will welcome the likes of cabaret fiend David Hoyle and Felicity Fitz-Frisky (of Frisky and Mannish), and that’s it. After this limited run, don’t expect to catch another of Dusty Limits’s solo outings until the Edinburgh Festival Fringe.