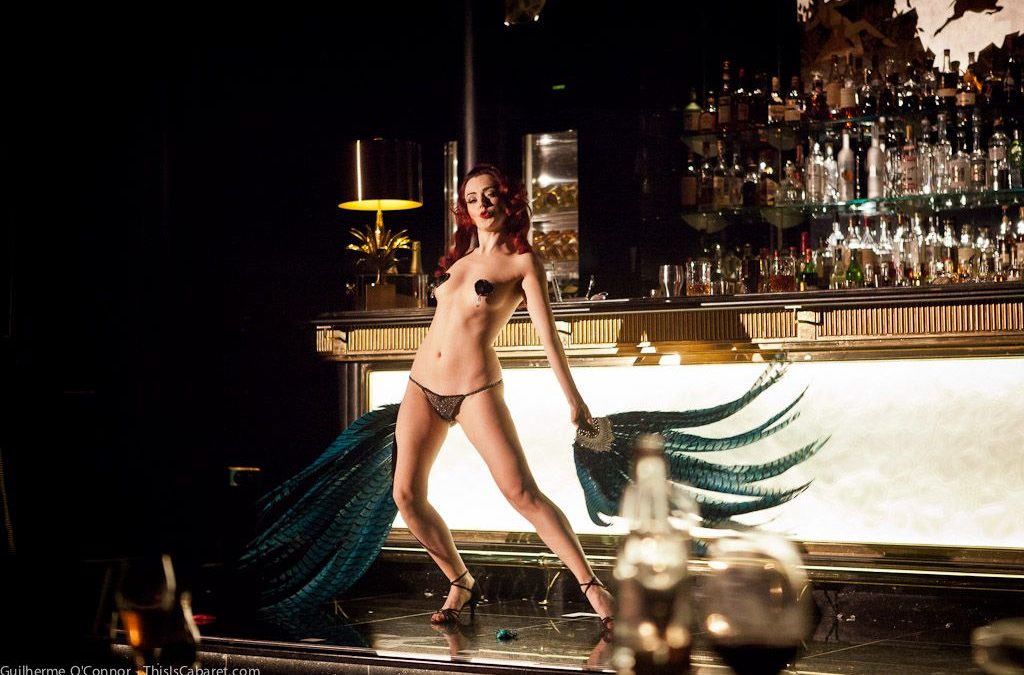 “Let’s wake ’em up upstairs!” yells Holly Penfield as she leads a dancing mob through the plush surroundings of the Beaufort Bar. You’d never tell it’s been 60 years since the Savoy Hotel last hosted a cabaret show, judging from the enthusiasm and consummate talent in the bill of Savoy Cabaret, the newest date in London’s variety calendar.

The Beaufort Bar is a new space created in the major renovation the Savoy underwent between 2007 and 2010. Built on the same room where the hotel’s original cabaret stage used to welcome the likes of George Gershwin and Carroll Gibbons, it exudes history. But the intimate room doesn’t live on former glories: its black and gold leaf art déco interiors are a peerless setting for a decadent night out, complemented by over 60 options of champagne and brand-new cocktail menu. 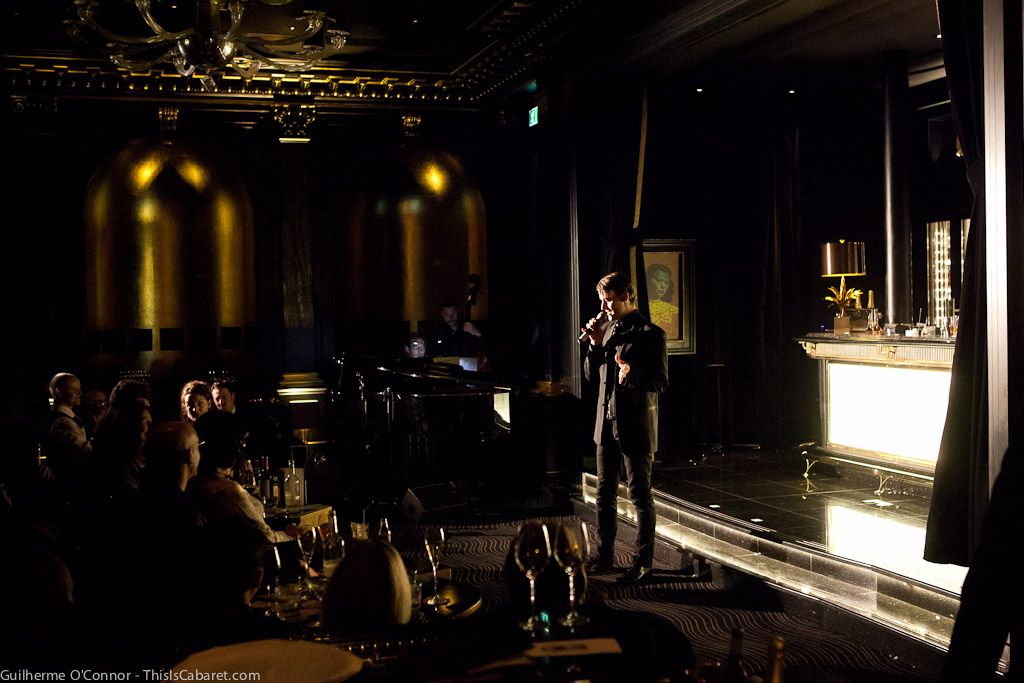 Accommodating 50 guests at its tables and alcoves, the new bar is the ideal place to let Dusty Limits loose. Backed by Tom Mansi on upright bass and Michael Roulston on grand piano (oh yes), the crooner makes good on his reputation as a champion of Weimar abandon with choice cuts from the Kurt Weill and Friedrich Hollaender songbooks. Though quite low-key and somewhat gloomy for the general tone of the evening, timeless classics like Ballad of Immoral Earnings and I Don’t Know Who I Belong To are always a treat in the subtle, finely nuanced interpretation of Mr. Limits.

A bill of indulgence at such a hotbed of luxury wouldn’t be complete without burlesque. Gracing the debut of Savoy Cabaret are four acts by two vibrant veterans of the scene. In a tamer mood than her usual fiery self, Kitty Bang Bang takes to the stage as a geisha, unravelling a hypnotic silk fan choreography made of precise, sprightly moves. Later, the dancer returns in full showgirl regalia for the balloon pop skit that she premiered at the 2011 Burlesque Hall of Fame Weekend in Las Vegas (unfortunately without the cigar). Polly Rae embodies glamour with a feather boa striptease culminating in as perfect a twirl as I’ve ever seen (and I’ve seen a few). In the second half, Ms. Rae dispenses more sass with the emblematic pheasant feather fan dance that was the climax of West End tease fest The Hurly Burly Show (which also featured Ms. Bang Bang). 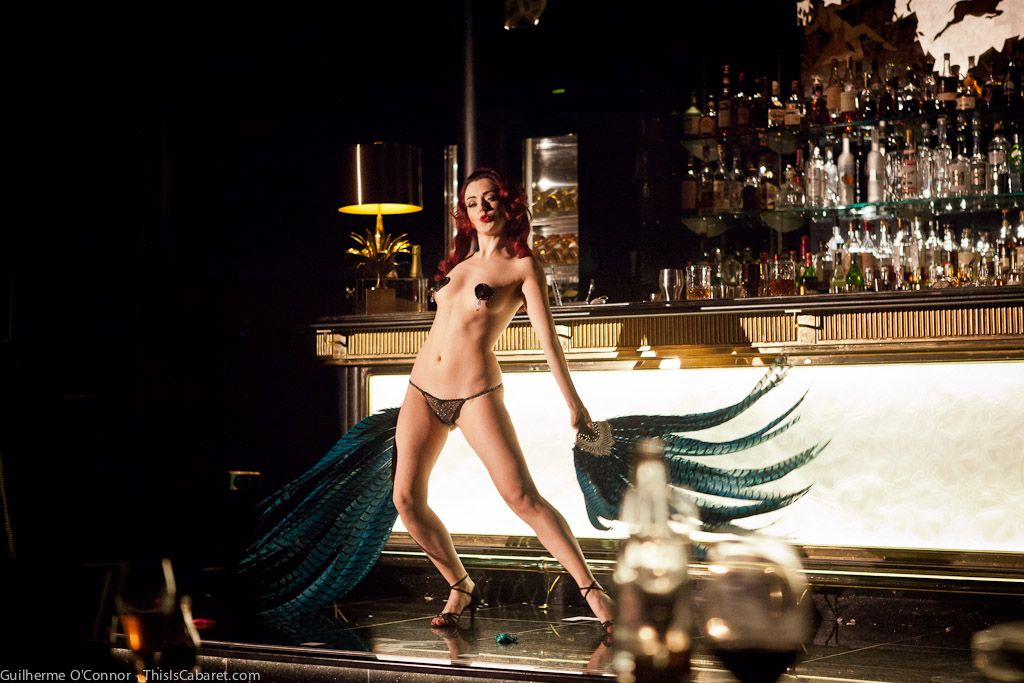 A spirit of tribute to the golden age of cabaret at the Savoy permeates the engagement, which starts with an original exotic dance routine performed on the very same spot in the 1920s (re-enacted by dancers Allie Ho Chee and Ash Mukherjee). But nothing screams cabaret decadence like a stiff shot of Holly Penfield. Ploughing through standards like La Vie en Rose and Some Like It Hot with unbridled vibrancy, the diva is an entertainer of relentless energy. She’ll climb on tables, sing every song in a new costume, tease patrons with her trademark riding crop and bring the crowd to a rapturous frenzy. Whether singing on her own or duetting with co-host Limits, she can range from kewpie-doll sweet to harpylike scary in one verse. Anything can happen when the San Francisco vamp is onstage. 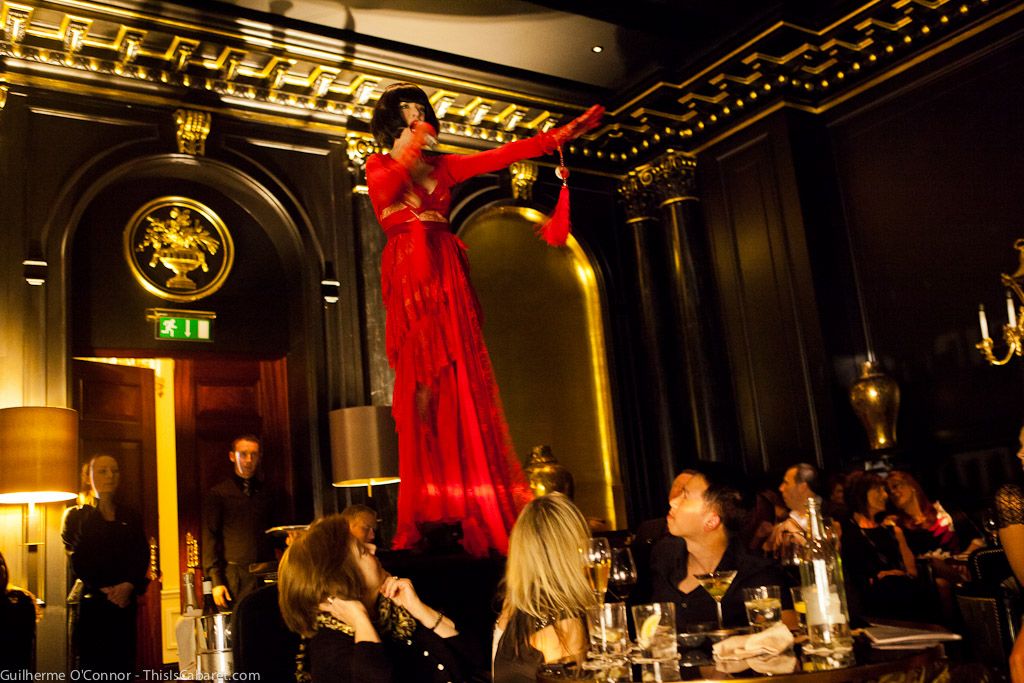 Contrary to what the hotel’s fame might suggest, there’s nothing formal or ceremonious about the evening. While the admission price is decidedly above the cabaret average, a few blocks away at Café de Paris customers often pay more for standing room. A casual atmosphere is assured by the welcoming décor and low-key lighting, only broken by the lit bar counter, which detracts from ambience and acts alike. The overall experience, though, is still a laid-back and sensuous affair.

Like its older brother upstairs, the celebrated American Bar, the Beaufort Bar doesn’t take reservations. With its limited capacity, though, tickets for Savoy Cabaret are likely to sell out well in advance. Two more dates have already been announced in May and July. Check the website and book early.