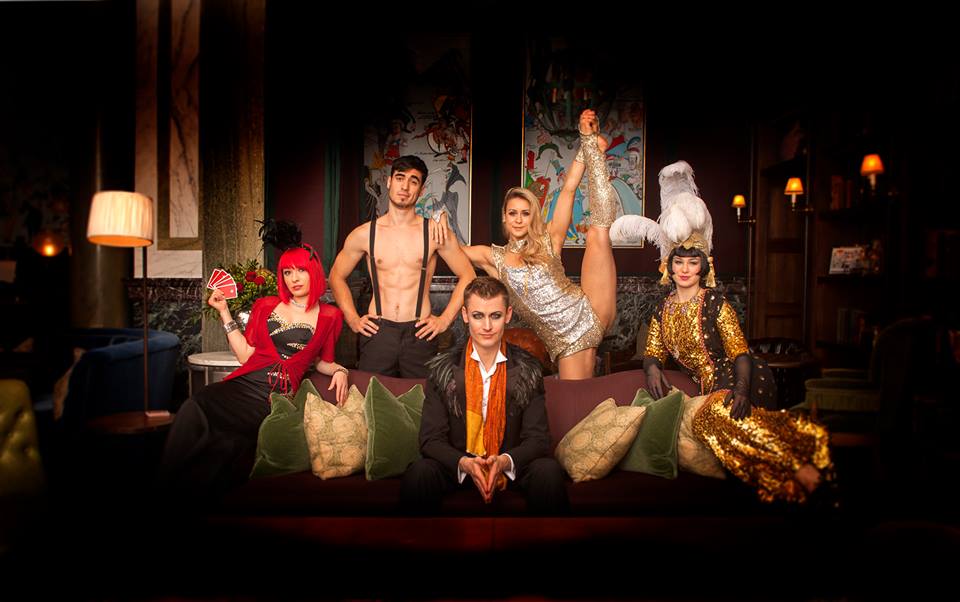 Does London want more or less posh cabaret? More it seems. On every other Sunday between now and Christmas, Cabaret At Scarfes Bar will see the Rosewood London’s iconic watering hole turned into a den of refined iniquity.

Located deep in what estate agents refer to as Midtown, Scarfes Bar has a certain old school grandeur about it. It was once known as the East Banking Hall and the interiors are protected with Listed Building status. It’s the kind of place where at one time it may have seen well-moustachioed men walking around in plus-fours, possibly with a golf bag over one shoulder or perhaps a cocked shotgun under one arm and a dead grouse under the other. These days, it is adorned with the works of and named after satirical illustrator Gerald Scarfe and the clientele are more likely to be well-groomed hedge-funders busily sexting away or drinking with the latest conquest.

The bill of fare at Cabaret At Scarfes Bar is certainly not to be sniffed at. Leading the charge is the Brisbane-born Dusty Limits. The only person to walk off with two London Cabaret Awards for Best Host, his talents go beyond compèring. Armed with a three-and-a-half octave vocal range, he has starred in critically acclaimed solo shows Post Mortem and Darkling and is a veritable doyen of the London cabaret scene.

He’s joined here by other experienced hands. To one side, musical trio Tom Carradine, Tom Mansi and Jonathan Kitching provide live accompaniment to many of the routines. Laura London’s close-up magic is simple yet astounding. Sammy Dineen is the sexier-than-thou acrobat whose brazen upside-down striptease noticeably raises the temperature of the room and focuses the attention in this chatty atmosphere. Fellow circus artiste Valerie Murzak makes expert use of her lithe body and the bar’s limited performance space to twist, turn and tantalise.

Edinburgh Fringe favourite Lili La Scala (Another Fucking Variety Show, Siren) combines some so-so clowning with a cultured collection of chansons like Bei Mir Bistu Schein and Sous Les Ciels de Paris. And then there’s Vicky Butterfly, an elegant and energetic blaze of burlesque. Some may call it posh stripping but both her Idol of Perversity and The Swan Bride routines are thrilling, hypnotic affairs with costumes to die for.

Compared to La Scala, Limits’ song selections feel a little closer to home and, given the redolent Englishness of the venue, all the more relevant. Original number Reunion is a grand call to arms while Mad About The Boy and If Love Were All are stirring reminders of the power of Noël Coward, a man one could easily imagine pulling up a pew here back in his day. Limits’ cover of Amanda Palmer’s Coin-Operated Boy is possibly a leap too far for this audience – the various blank and bemused faces suggest that perhaps coins are not a form of currency they are au fait or comfortable with now or if they ever were.

There’s certainly little to fault on the casting front but the venue is a real challenge. Sightlines for about a third of the audience are often negligible, especially for those nearer to the external entrance. The long, thin layout of the performance space means that for those seated at either end, the night’s entertainment swings from feast to famine. During the performances, those chatting at the bar amongst themselves or with one of the performers create more unnecessary background buzz than Weimarean atmospherics and waiting staff bringing food and drink add to the noise and motion of the show. Too many of those sitting find themselves standing or craning their necks to see the all-too-brief moments of physical brilliance from Butterfly, Dineen and Murzak.

The obvious solution, it seems, would be to begin the quaffing early and bag a pew somewhere towards the centre of the room. This might be posh cabaret but the riches are not just not in the audience.

Performances of Cabaret at Scarfes Bar are scheduled for 2 November, 16 November, 30 November and 14 December 2014.